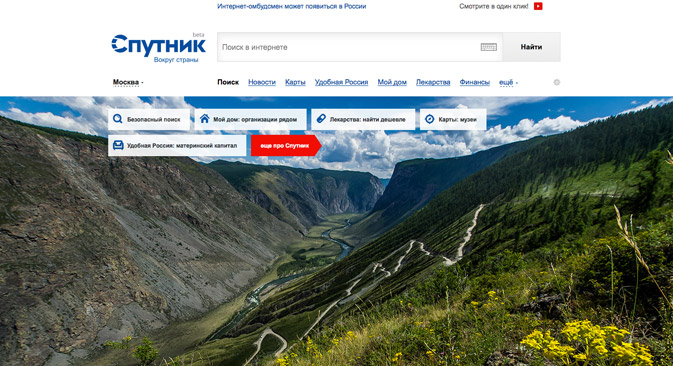 Russia’s national telecommunications company Rostelekom has presented its latest development, the search engine Sputnik. The site, which will prioritize official pages and facilitate interaction with social institutions, aims to become one of the top ten Russian-language sites. However, critics claim Sputnik could be used as a tool for censorship.

At the St. Petersburg International Economic Forum on May 22, Russia’s national telecommunications company Rostelekom (in which the Russian Federation has a greater than 50 percent stake via Rosimushchestvo and Vneshekonombank) presented the beta version of their latest development, the search engine Sputnik.

The search engine, which will prioritize official pages, is aiming to become one of the top ten most-visited Russian-language sites. However, critics accuse the project of being a means to censor content and serve as a tool in an information war.

Rostelekom Vice-President Alexei Basov revealed to the newspaper Vedomosti that Sputnik is set to become an access point for society to the developing state digital infrastructure.

In Russia, which the new search engine is first and foremost designed to serve, it will have to compete with Yandex and Google, which together occupy around 90 percent of the search engine market. However as Sputnik.ru representative Dmitry Chistov explained to the publication RBK, the company is not expecting the search engine to compete directly with other market players. This is an entirely different concept.

According to Basov, the concept behind Sputnik is one of ensuring that official sources of information take priority and that there is a high degree of relevance as a whole in queries linked to how citizens interact with social institutions. Rostelekom feels that for the user it is not so much the comprehensive nature of data that is critical, as the absence of “unreliable” information.

“This is no simple engineering challenge and naturally we are at the start of this journey,” Basov told Vedomosti.

Aside from the search function itself, several other socially oriented services can be accessed through the portal. These can assist Russian citizens to reach official information and state services, or to locate the nearest government agencies: the district health center, police station and so on. This high-speed access to services is also displayed in the form of a widget in the search results.

Rostelekom is hoping to see Sputnik reach the top ten resources on RuNet (the Russian-language internet) in terms of numbers of visits in just four years, Basov noted. Shareholders in Rostelekom are also expecting the project to become self-financing quickly.

According to Basov, the search engine will earn money via advertising and by taking a percentage for providing certain services. The project will only begin to work commercially, however, once it leaves the beta version behind.

Rostelekom feels that keeping the search engine initially free of advertising should lead to more active growth in users. The level of investment in the project has not been disclosed, however a Vedomosti source from Rostelekom previously estimated this to be 686 million rubles ($20 million).

The origins of Sputnik

The Sputnik site states that the project began in 2008 as a startup by a team of enthusiasts passionate about searching for information. Rostelekom only stepped in to invest in the project in 2012.

Ilya Ponomaryov, a deputy in the State Duma who is known for his oppositionist stance, announced previously in comments he made to RBK that the creation of a state-owned search engine was discussed in the Kremlin following the armed conflict with Georgia in 2008. According to him, the then-president Dmitry Medvedev’s administration looked initially at how media information is arranged in search data and how this influences public opinion.

Basov responded to the question put by Vedomosti as to whether Sputnik would use administrative resources and be installed in government agencies and schools by saying that the project has market objectives and ways of meeting them. He added that initially Sputnik would rely on investment as its primary resource, and would be supported by Rostelekom’s role as both an infrastructure company and a national telecom provider.

“Furthermore, Sputnik meets challenges that for the state are important, as well as performing social functions, and any support from the state in these areas would benefit the project. It is unlikely, however, that this would mean that the service would be imposed on users,” Basov said.

The specialised publication Roem.ru confirmed that at the moment Sputnik.ru is not being made available to users abroad in order to protect it from DDoS cyber attacks. According to Roem.ru, as the primary resources for botnets (the computers from which attacks are launched) are located abroad, isolating all overseas users (which are not the project’s target audience anyway) has solved this problem. In the future Sputnik.ru will be available to users from any corner of the globe.

A number of Russian internet users and experts have expressed worry that the creation of a state-owned search engine is a step toward implementing online censorship.

“News and a search engine that come from the government will always be perceived as an instrument of agitprop,” Arsen Mirzayan, founder of the Vseveda housing and public utilities information computing center, told the industry publication Tsukerberg Pozvonit (“Zuckerberg Will Call”). He believes that this could be manifested by there being, for example, “less Navalny” [Alexei Navalny, a popular opposition politician and blogger who is currently serving a court-ordered sentence of house arrest] in news and search results.

“It seems to me that a major goal in creating a new search engine is also to create an additional tool to be used in an information war,” Mirzayan stressed, noting that he personally supports such a government strategy, even though he feels “it would be better to take over Yandex.”

Sputnik’s press service responded to accusations of search results censorship. “The project is in no way connected with a policy and control of the internet,” the company’s press service said in answer to a question asked by a reporter from Look at Me.  “A different matter is that the issue of controlling the internet is in general philosophical and political. Where the line between, say, a rational cleansing and censorship falls remains an open question.”

The newspaper Kommersant, with a reference to a source in the president’s administration, wrote that for Sputnik, “killing” the business of Yandex and Mail.ru Group is not a worthwhile goal.

In an official statement, the Yandex press service said that Russia is one of just a few countries in the world where users can choose between different search engines. “Strong competition fosters continual improvement in the quality of search engines and the creation of new services and technologies,” said Yandex.