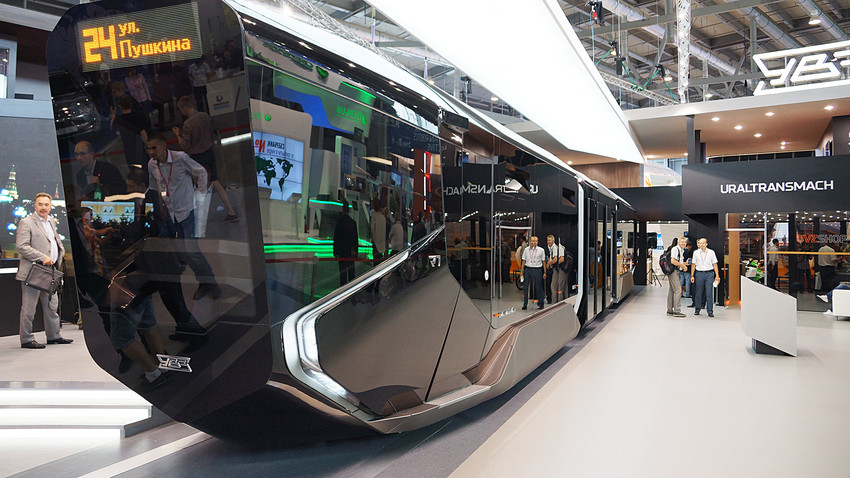 The R1 tram was unveiled on July 9.

Darya Kezina
A new tram called Russia One, which was developed in Russia, has been shown to the public for the first time in Yekaterinburg. The futuristic look of the tram, reminiscent of the Decepticons and craft from Star Wars, has sparked intense debate on Russian social networks.

A hi-tech new Russian-built tram has become the subject of heated discussion online after being unveiled to the public in Yekaterinburg.

Visitors to the annual Innoprom international industrial trade fair, which took place in Yekaterinburg (almost 900 miles east of Moscow) from July 9 to July 12, dubbed the innovative new-generation tram Russia One (R1) an “iPhone on rails.”

Jointly developed by Uraltransmash (part of scientific and production corporation UralVagonZavod) and the experimental design bureau Atom, the ultra-modern silent tram with its tinted windows looks more akin to a huge black crystal or a high-speed train from a sci-fi movie than a form of urban public transportation. Manufacturers have nicknamed their unusually-shaped offspring "the world's first business-class tram."

Trolleybuses in Moscow: Old school but so cool

"Our goal was to change the attitude of city residents toward the concept of public transportation for the better and set a new standard for public transport throughout the country and even abroad. We’re competing with industry giants such as Alstom, Bombardier, and Siemens,” Alexei Maslov, the designer of the ‘space tram’, told RBTH.

Testing of the new Russian tram will begin in February 2015, and full-scale production is scheduled for launch at the beginning of 2016. The first super-trams should appear in Yekaterinburg, then in Omsk, Moscow, and then abroad.

The official name of the vehicle, the first low-floor tram manufactured in Russia, is the "New Three-Section Low-Floor Tram R1”. It is equipped with Wi-Fi, GPS, a satellite navigation system, video cameras (instead of mirrors), and air conditioning. Special lamps installed in the tram make it possible to switch between different levels of brightness, depending on the climatic conditions of a particular city.

The tram’s handrails are made with antimicrobial copper, a unique material that prevents the spread of bacteria. A built-in system of quartz lamps installed to clean the passenger compartment disinfects all surfaces overnight, which also reduces the risk of infectious diseases being transmitted among passengers.

The engineers were faced with the difficult task of creating a tram that met international industry standards entirely from scratch. R1 is built almost entirely with Russian materials, with the “reflective” tram body being covered with panels made out of high-end Mosavsteklo glass. The only foreign components are the safety mechanisms for opening doors and the unit that joins the tram cars together.

As the head of Uraltransmash’s tram production line Nikolai Kirnos explained, the tram’s unique design lies in the fact that each wheel has its own separate engine (the trams have a total of eight wheels). This sets the R1 apart from regular trams, which have one engine per wheel pair. R1 can continue operating even if one of the cars breaks down.

In terms of speed, the new tram is comparable to an electric train and can be used for transportation between nearby cities. The tram can also travel up to 50 km on batteries.

The body’s modular design makes it possible to change the configuration of the passenger compartment in accordance with the specifics of a given route – to reduce or increase the number of seats.

The touch screen in the cabin displays images from cameras inside the passenger compartment and from external recorders. The cabin hangs over the tracks, increasing the driver’s field of view by 15 percent.

This makes it possible to avoid one of the most common high-risk situations, when a pedestrian enters the lower blind spot of the driver by crossing the street directly in front of the tram at a tram stop.

The touch screen in the cabin displays images from cameras inside the passenger compartment. Source: Darya Kezina

At the same time, the ‘smart tram’ costs half the price of its European counterparts (1 million euros, compared to 2 million euros for the Pesa three-section tram). The most expensive component of the R1 – the cars that make up a third of the cost – were made by the tram’s manufacturer, Uraltransmash.

The first photos of the tram provoked a strong and mostly positive reaction across Russian social networks. "The Imperial March starts playing from the speakers" and "This is so Darth Vader" are some of the comments left by Russians under the photos.

Some people thought the design looked similar to the famous Jawa sandcrawler from Star Wars. Others thought that the tram would be a perfect fit for Batman and dubbed it the “Bat-tram.”

One internet user was skeptical about how well the new tram would fit in Russian cities (which can get pretty dirty in the spring and fall) and posted a photoshopped image of an R1 trying to travel across the puddles and heaps of snow in Yekaterinburg as evidence.