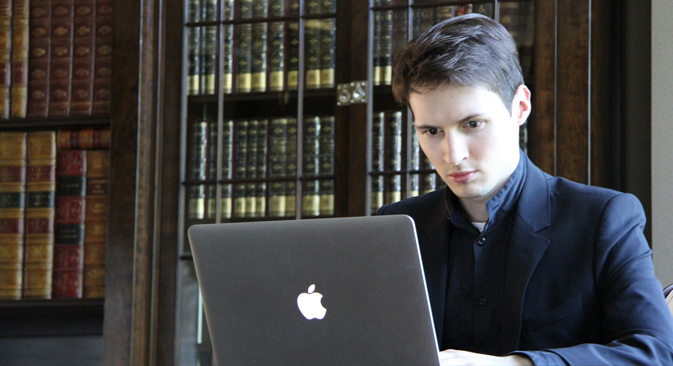 The story of the Vkontakte social network fits in with the overall picture of growing state regulation in the Russian segment of the internet.

After a series of conflicts between management and shareholders, Russia’s most popular social network, VKontakte (VK), lost its charismatic founder and C.E.O., Pavel Durov, in April. Three months later, Durov has yet to be replaced and the controversy over his departure continues. Was Durov a victim of politics, or was the decision based purely on business interests?

Durov founded VKontakte in 2006 when he was a student at St. Petersburg State University. Facebook was already available in the United States at that time, but it was practically unknown in Russia. Durov, one of the few Russians to have seen it, was inspired by it, and his new project was clearly based on the American social network.

Very quickly, VK became the most popular social network in Russia. Its similarity to Facebook gradually decreased as the creative team introduced new ideas and platforms suited to the Russian market. One of these was a service that allowed users to download audio files for free, which caused the site’s popularity to explode even as copyright holders criticized the policy. With this service, Durov created one of the world’s largest libraries of pirated recordings. Although individual tracks could be removed from the site at the request of copyright holders, the number of pirated tracks on the site continued to grow. For Durov, maintaining the library was not just a way of making VK more attractive for users — it was a matter of principle.

Maintaining free access to media content was not the only Durov principle that generated controversy. Durov also rejected aggressive monetization and was reluctant to block access to pornography. Additionally, he was committed to running his site with a small staff. Over time, Durov developed a reputation as a maverick who made bold decisions but controlled all the project’s development. To outside observers, Durov seemed to be modeling his management style on Apple cofounder and former C.E.O., Steve Jobs.

Since Durov did not hold a majority share in VK, to carry out some of his boldest decisions he needed the support of the other co-owners, Vyacheslav Mirilashvili and Lev Leviev. At one point, relations between the three turned so sour that Durov deleted Mirilashvili’s and Leviev’s VK accounts.

As the site grew, VK needed new investment for development. Eventually, one of Russia’s Internet giants, Mail.Ru Group, purchased 39.99 percent of the social network. The company made a bid to acquire all of VK, to which Durov’s responded with an Instagram photo of a middle finger with the caption: “Official reply to the Mail.Ru trash holding company’s attempts to take over VK.”

In late 2011, this explosive mix was further complicated by a political component. Durov refused a request from the Federal Security Service (F.S.B.) to block opposition groups’ accounts that were used to organize antigovernment protests in Russia. Durov became a hero for the opposition, but only until he explained he said no to the F.S.B. not because of any political convictions, but because he was anxious for VK to remain competitive.

In spring 2013, VK became the subject of several unflattering reports in the media, prompting some to suspect a deliberate attack on the company. Its culmination came with reports that Durov had allegedly run over a traffic policeman. There was no evidence to substantiate the accusations, and charges were later dropped, but the damage was done to Durov’s reputation and to that of the company.

Following the negative publicity campaign, it was announced that Mirilashvili and Leviev were selling their 48 percent in the company to the United Capital Partners (U.C.P.) investment fund. U.C.P. had not previously invested in online projects, and reports later emerged indirectly linking U.C.P. to Igor Sechin, the chairman of Russian oil major Rosneft and a close ally of President Vladimir Putin.

The reports prompted many to see the Kremlin’s hand in the deal, and allegations were made that the media attack on VK had in fact been orchestrated by the fund. U.C.P. President Ilya Shcherbovich denied both charges, however, responding that the fund was governed purely by business interests and that the share purchase had been completed before the negative press.

In August 2013, Durov launched a messaging service called Telegram and some VKontakte developers moved there. The move angered U.C.P., which said that since Telegram had used VK assets, it should belong to the fund.

U.C.P. wanted Durov removed as chief executive officer. Mail.Ru, however, wanted Durov to stay. In January, Durov had sold his share in the company to Mail.Ru Group, and on March 21, he resigned. He announced his decision on April Fool’s Day, which led many to believe that it was a joke. Speculation about Durov’s true intentions grew after he withdrew his resignation two days later. Durov didn’t have time to clarify his position, however. On April 21, the company’s co-owners officially fired him.

In response, Durov said that he sold his share in the company under pressure from the F.S.B. after it demanded that he disclose the details of the owners of VK pages supporting the EuroMaidan (Ukraine’s pro-European Movement). At the end of April, Durov left Russia.

Although the story of VK fits in with the overall picture of a growing state regulation of the Russian segment of the Internet, there is no certainty that the underlying reasons were indeed political. The actions of U.C.P. and Mail.Ru could just as easily be explained as business decisions. Although no new C.E.O. has been named, VK’s future will likely include a more traditional manager who will smooth over some of the controversies generated by the enfant terrible Durov. The new chief executive will likely try to establish a constructive dialogue with copyright holders, advertisers and the authorities.

Yevgeny Trifonov is an IT journalist, who has been following the VK story since 2011.