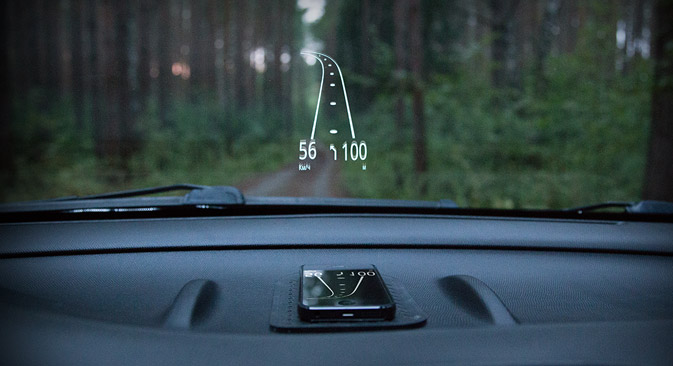 Two cousins have created a head-up navigation application called HUDWAY. The application, which can be downloaded to smartphones, projects the road ahead onto the windshield, improving road safety when visibility is poor.

A pair of Russian developers has created an application that projects navigation information onto the inside of a car windshield, improving road safety in conditions of poor visibility.

The application, called HUDWAY, was launched in Russia in August 2013, with its international version following two months later. It is already available in English, German, Polish, and Chinese.

The co-founder and CEO of the project is Ivan Klabukov, who is developing the startup together with his cousin, who three years ago became interested in professional car rallies.

"Can you imagine: You are driving at night, through a forest, along a winding narrow road, at a speed of 100-150 kilometers per hour. One mistake, and you are off the road and the car is badly damaged, and repairs are very expensive. So there was demand for a more reliable navigator," Klabukov told RBTH. It was after hearing his cousin's rally stories that he came up with the idea of HUDWAY.

In the end, the idea was implemented in the form of a mobile application that projects the car's route, in 3D format, onto the windshield. The driver sees all the curves and differences in surface level of the road and, importantly, not just the next turn but the one after it as well, which makes the driver better prepared and boosts their confidence. If a human navigator tells the driver what is round the corner, HUDWAY shows it – although it can "talk" too.

The name of the application derives from the abbreviation HUD (head-up display). This class of devices originally came from military aviation, where pilots look at the information display located right in front of their eyes instead of looking down at individual instruments.

The application operates on the iOS and Android platforms and does not require any additional equipment, as information is displayed right on the windshield. Having said that, an anti-slip cushion is essential, otherwise the smartphone will slide to the floor or whizz to the other end of the car every time the car brakes.

It should be noted that on a bright sunny day, the picture projected onto the windshield will be rather dim, so HUDWAY is best used at night, in rain, fog or heavy snow. All the more so since these are exactly the conditions it has been designed for.

The application has already been installed by 500,000 people. The majority of downloads have been made to iOS devices, with only 50,000 being made to Android (the beta version of HUDWAY for Android was launched only in February this year). For the time being, the application is not a full-fledged navigation system but just an auxiliary tool for improving visibility in difficult conditions.

According to Ivan Klabukov, so far the project has been wholly private, both from the point of view of development efforts and of investment made in it. His team has spent some $100,000 on this project, most of which went on developing the product. The team has not yet dealt seriously with promoting it – however, in August 2014, with the launch of an upgraded version with a voice guide, it intends to address that area too.

The application is free to download but in order to get rid of advertisements, users will have to pay a dollar. Add another dollar a month, and it will be possible to switch on the pro version or subscribe to it for a year ahead. Pro functions include voice prompts and settings for how projected information can be displayed.

By the end of 2014, the company plans to have reached 2 million downloads.

Fully aware that in several years' time, all cars will be sold with systems similar to HUDWAY automatically built into them, the project team are not at all daunted.

"In five years' time, far from all vehicles will be fitted with systems like this, only those in the premium segment. Which is good,” says Ivan Klabukov. “Owners of other cars, not having this function, will be curious to try for themselves what this thing is. And we shall give them an opportunity to do just that. That is to say, it will only warm the market up."

Experts are equally optimistic about the prospects of the project. "The idea is not new but is interesting. So it will most likely be in demand. I have tried other projection applications, like a speedometer, it was fun," says Alexei Shevelev, project manager at the Thematic Media company.

"Any idea or device that improves road safety has the right to exist and to enjoy interest from motorists," says Alexei Starodymov, an independent gadget market expert and editor of mobile and digital tech website DGL.ru.

According to him, this application should be assessed for its convenience only after the relevant tests using smartphones with different screen size have been run, since the picture projected to the windshield will differ depending on the size of the smartphone screen.