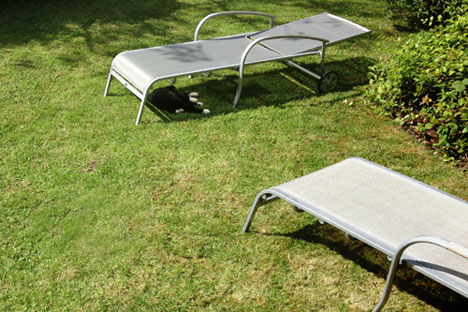 A new generation of designers is coming through in Russia, and some of them are already finding success with their inventions. The Kommersant newspaper has profiled three devices designed to make everyday life easier that could find use in any part of the world.

May soon appear on kitchen tables in Japan, China, and the U.S.

In 2009, designer Anastasia Gavrilova was on a work experience project in London, where she came up against an unusual problem: Whenever eating out, she was served tea or coffee without a teaspoon.

Two years later Gavrilova met her future husband Rafael Gainullin, an IT and user experience expert. On one of their dates, she told Rafael of her predicament in London and shared with him an idea that would allow one to do without spoons completely. A couple of years later, the Pegtop mug was created - a special drinking vessel that mixes your drink with a simple spin.

The design, which has already been patented by the couple, is based on the idea of a spinning top: The mug has a dip in its bottom that fits with a protuberance in the middle of the saucer that the mug spins on. On its inner walls, the mug has diagonal-wise ribs, which direct the liquid being mixed, set in motion by spinning, towards the bottom of the cup rather than up. The main idea for the mug and its mechanism were developed in a matter of just two weeks.

The main difficulty, Gavrilova recalls, was to prevent the liquid from spilling as the cup spins.

In 2012, this "smart" mug made it to the finals of the prestigious international Red Dot Design Concept contest in Singapore and won the Design and Design competition in Paris. In addition to private buyers, three foreign Internet stores (from Japan, China and the USA) have expressed an interest in the mug, as well as a large Russian industrial company, which has ordered Pegtops as corporate gifts for its clients.

The cost of the spintop mug is estimated at $40-60, depending on the material: ceramic or glass. The designers have decided to resort to crowdfunding to establish production. The first batch of 10,000 mugs is expected in June.

Inventor is looking for partners in South-East Asia

Have you ever been in the situation when you are watching your favorite TV series on your tablet and eating, say, shrimps, but the episode ends and you have to go and wash your hands before you can click on the next episode to continue watching? Dmitry Terentyev, a postgraduate student at the Bauman Moscow State Technical University, has created a monitor that can be used in these and any other circumstances, thereby saving you the inconvenience of extra movements and delays.

The idea came to Terentyev, 22, when he was working on his graduation paper – a time when the young scientist was conducting many experiments. As a result, he developed an innovative sensor monitor which combines two functions, floating touch and multi touch. Both these features are already present on the market but no manufacturer has yet been able to combine the two.

For example, Sony has technology that makes it possible to operate a smartphone from a distance with one finger but it is unable to register movements made by several fingers at the same time. Terentyev managed to do just that: Thanks to floating touch, the monitor performs a user's instructions without the user touching the screen (at a distance of up to 10 cm) and with the help of multi touch, it registers multi-task gestures too. A patent for Terentyev's invention is currently going through the necessary approvals.

Every year, Russia imports some 800,000 sensor monitors worth a total of $287 million, a third of which come from foreign manufacturers of smartphones and tablets. Terentyev estimates possible sales from his invention at about $130 million. Potential clients on the domestic market are service centers, manufacturers of navigation systems, self-service terminals, automotive electronics, ATMs, and producers of defense and medical equipment.

The scientist, who is now in talks with private investors in Russia and abroad and with potential partners in South-East Asia, plans to produce the first test batch of 100 monitors this fall. Terentyev expects the first profit to start rolling in by 2016.

Has hopes for China and Latin America

In 2011, a graduate of the Bauman Moscow State Technical University, Alexei Fomenko, and a group of friends developed an idea of a ramp that could be installed in any location.

"We saw that there were residential buildings in Moscow where it was impossible – for fire safety reasons - to install either ramps or wheelchair lifts as they would narrow the passage," Fomenko recalls. It took him, Kirill Yershov and four other engineers a year and 2 million rubles ($57,000) to develop a "smart" ramp that they called the I-Ramp (I for ideal).

According to Fomenko, their foldable ramp with adjustable tracks has no equivalents anywhere else in the world. It is operated by pressing a special button, but can be used only by those who have been issued with an electronic key. On a signal, the ramp extends from the handrail, while the width between the tracks can be individually adjusted.

Mass production of the I-Ramp was launched about two years ago, and in 2013 the company's sales increased nearly sevenfold. The company that Fomenko and Yershov have set up, Izobretatel Komfort (“comfort designer” in Russian), sells about six ramps every month at a price of $5,000-$5,500 a piece (for reference, an ordinary metal ramp usually costs about $1,000). The project has been endorsed by the Moscow mayor's office and has already found three investors, one of whom has invested $260,000 in the production of I-Ramps.

"When we were starting this business, everybody was telling us: ‘What are you thinking?’ The municipal services and utilities market is the most corrupt; no one can achieve anything there without connections and kickbacks. But it turned out there are normal people working there, who are interested in innovations,” says Fomenko.

The designers have plans to supply their ramps not only to other Russian cities and CIS countries but also to Latin America and China.