Peat and forest fires blazing around Russia after hot spell 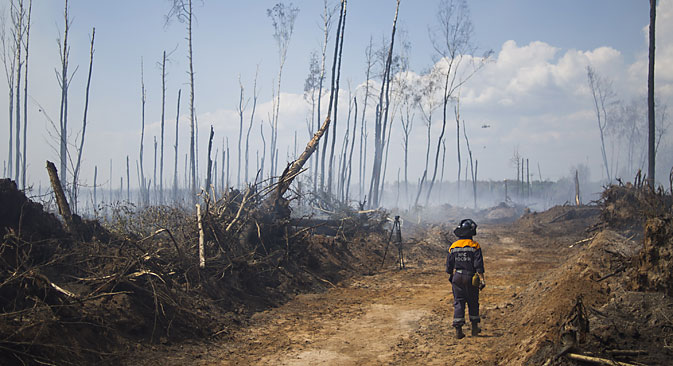 A forest ravaged by a peat fire that emerged due to an abnormal heat. Source: ITAR-TASS

A winter in which there was very little snow, and now hot, dry weather in spring and summer have meant that forest fires started burning back in March in European Russia, and peat fires are now burning in the Tver Region, 200 km from Moscow. RBTH reports on the situation.

According to Greenpeace estimates, the area that is ablaze is twice as large as official figures – Co-ordinator of the Greenpeace Forest Program Alexei Yaroshenko gave a figure of at least 2,000,000 hectares in an interview with RBTH.

As far as forest fires are concerned, the most serious situation at the moment is in Yakutia (north-eastern Siberia) and to a lesser extent in separate areas in the Irkutsk and Krasnoyarsk regions.

Large peat fires are currently occurring in four areas in the Tver Region, producing a great deal of smoke,

PHOTO OF THE DAY: After fire

Judging by expert forecasts, these fires and smog should not affect Moscow. According to the Minister for Environmental Management in the Moscow Region Anzor Shomakhov, “if Moscow is affected by the smoke then it will be thin, as the fires are burning themselves out and the risk of similar fires happening in Podmoskovye [the area around Moscow] is low.”

In the Tver Region, however, according to Yaroshenko, the situation is serious and there are “two or three fires, which will be difficult to extinguish before the fall.”

Nevertheless, this year’s fires will not reach the levels seen in 2010, according to both official and unofficial statistics. Greenpeace estimate that 5,000,000 hectares were ablaze at that time, though official statistics painted a different picture, claiming it was half that figure.

In 2010 the situation facing agricultural enterprises was so serious that Russia was forced to put a stop to grain exports. The number of deaths from heart disease grew sharply as a result of smog in European Russia from peat and forest fires.

Peat is formed as a result of the decomposition of marsh plants: They die off, are covered by water and begin to decay without letting oxygen in. Not all marshes, however, produce peat.

The total area covered by marshes in Russia is around 2,000,000 hectares, approximately three times the size of France. Peat marshes occupy around 568,000 hectares and are in the main concentrated in the northern part of European Russia, in Western Siberia, and in Kamchatka.

About 400 forest fires registered in Russia so far this year

In its natural state peat performs vital climatic functions. Firstly, it accumulates carbon from the atmosphere. Secondly, it acts as a natural water filter and extracts impurities and heavy metals. Today filters employing peat are produced in Russia for everyday use.

Peat mining reached its peak in the Soviet Union. In a single year in 1975 some 90,000,000 tons of it were mined - more than all other peat-producing countries put together. In Finland and Canada for example, which are in second and third place in terms of peat production, a total of just 1,000,000 tons each of raw material were mined in the same year.

In order to maintain these levels of production a huge area of marshland was allowed to dry out without any ecological considerations. As a result, when energy production began to switch to cheaper gas, peat lost its value and peat fields were abandoned.

It is impossible to give an accurate figure of the area covered by peat fields in Russia, but estimates run into hundreds of thousands of hectares. Since these fields are not monitored on a permanent basis, old peat fields have begun to burn. Once it has caught fire, peat can burn for years, unless it is dowsed in water. A temperature of 120-140 degrees is required to start a fire, as well as a low level of humidity.

In 2002, peat fires in Russia were only extinguished completely during the spring flood: The peat had continued to burn even under the snow.

For Russia the summer of 2010 was the hottest since weather records began and 22 temperature records were broken in the space of three months. The high air temperature (no lower than 86 degrees) was accompanied by an anomalous dry spell.

In the course of the entire period, 60 people died in Russia and around 2,500 homes were burnt down. In all, 134 population centers were damaged by fire, eight of which were destroyed completely. In 2010 the smog caused by these fires was so dense that visibility in Moscow fell to 55 yards.

Yulia Shevelkina, a resident of Shatura (a town approximately 25 miles from Moscow), describes the effect of the 2010 fires on local inhabitants:

“People were afraid to cross the road, because they could not see the cars. No respirators or air conditioning provided protection from the smell of the fumes. We were forced to sleep on the floor on wet bed sheets so we could get some sleep - it was only at floor level that you could more or less breathe normally,” says Shevelkina.

She also said that the peat burned so fiercely that the fire engines and tractors that were employed to extinguish the forest fires sank into the ground.

Following the 2010 fires, work began in the Moscow Region to flood the dried-out former peat marshes, which so far appears to have shielded the region from further serious peat fires.

Read more: Moscow in the Murk>>>