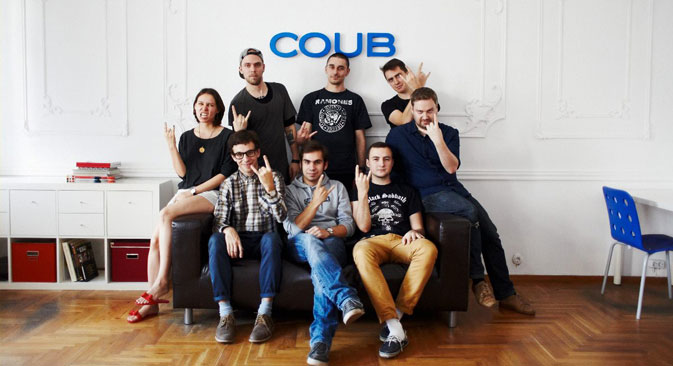 Coub, a rapidly-growing Moscow-based startup that assists in the creation of 10-second looped video clips, is looking to expand beyond Russia and focus on the American market.

With over 50 million unique visitors to its website every month, Coub, a fledgling Russian startup, has set its sights westward. In July Vaizra Capital, a venture fund headed by the co-founders of Russia’s Facebook competitor VKontakte, pledged to invest $2.5 million into the company. Now armed with cash and global ambitions, Coub has opened an office in New York to help spread the idea of catchy looped video clips to the wider world.

Remember GIFs, short clips that play on an endless loop? Coub shares similarities with them but adds a soundtrack and an easy-to-use online editor. This lets users grab video from YouTube, Vimeo or a hard drive, cut it to a short 10-second clip, add an optional soundtrack and loop it away. There are already over 550,000 “coubs,” as users call them, with over 337 million views generated each month. And the technology’s popularity is still growing.

Coub’s founders Anton and Igor Gladkobrodov, together with Michael Tabunov, launched the service in 2012. Not long after their launch coubs began to fasten their grip on the Runet (Russian-language Internet).

A famous video featuring a relaxed bunny taking a shower in a sink to the song, “Breathe,” by Telepopmusik is just one of 500 hit clips that have broken the 1 million-view threshold.

Coubs’ viral potential has quickly attracted investors’ attention, and the startup raised its first $1 million from the Russian funds Phenomen Ventures and Brother Ventures in 2013. Investors have not disclosed the conditions of the deals, but said that they had received minority stakes.

In April the company signed a deal with Russia’s biggest seller of video commercials on the Runet, Gazprom-Media Digital. The deal has made it possible to offer advertisers customized Coub channels where they can create, upload and promote their commercial videos.

“Coub has attracted a huge audience of young and tech-savvy users and that is what makes it an ideal channel for digital ads,” says Tatyana Matveyeva, PR director of Gazprom-Media Digital.

“Coub is an ideal platform for creating catchy videos that can be used by brands in special competitions for customers and in interaction with clients,” continued Matveyeva, adding that, “these sorts of ad campaigns are able to generate up to 1.3 million unique viewers.”

Technology experts tend to believe that coubs have the potential to succeed internationally and attract the attention of foreign venture funds if it leverages its monetization model based on its clips’ viral promotion.

“Nowadays marketers are much more advanced in terms of using new channels such as social marketing compared to 2006 when Twitter was launched,” says Dmitry Galperin, Investment Director of Runa Capital, one of Russia’s largest venture funds. He added that Coub would likely have a shorter path to turning a profit than Twitter because of the growing popularity of viral advertising clips.

“Coub has spread virally quite successfully over the past few months. It hasn’t reached the success level of Vine or Instagram yet, but such services have their ups and downs, subject to user appeal and trends. Few people could imagine that Instagram would become so big back in 2011,” Galperin said.

Christina Bechhold, a New York-based investor and co-founder of Empire Angels, said that if Coub seeks to raise significant investment in America, it needs to “be able to replicate its strong user base growth outside their home market” and prove that their potential monetization streams are scalable.

Now as the company turns to the west, it will focus on its mobile apps in iOS and Android to make Coubs more social.

In an interview in late 2013, Gladkobrodov said that mobile apps would boost Coub’s social aspect. “We started as a creative community (with most coubs coming from the desktop as a remix of existing content) but we’re turning more social with the help of apps,” he told TJournal.ru.

Stanislav Timoshchuk, a long-time Coub user and a founder of Checkit, a geographic application that enables searches for goods and services worldwide, said that Coub’s growing mobile presence opens up a lot of opportunities for boosting its international user base.

“If Coub’s iOS and Android apps prove popular, and the company shows that it can change fast, react to users’ feedback quickly and broaden its global user base rapidly, then it will be a coveted prize for top investors,” Timoshchuk said.

Currently, the majority of Coub’s users are from Russia and Eastern Europe. The company’s founders said that it has recently seen a significant surge in usage from Hungary and Japan. However, the main focus is still on entering the U.S. market as Coub’s owners maintain that when a company can become popular in the U.S., then they will become popular everywhere.