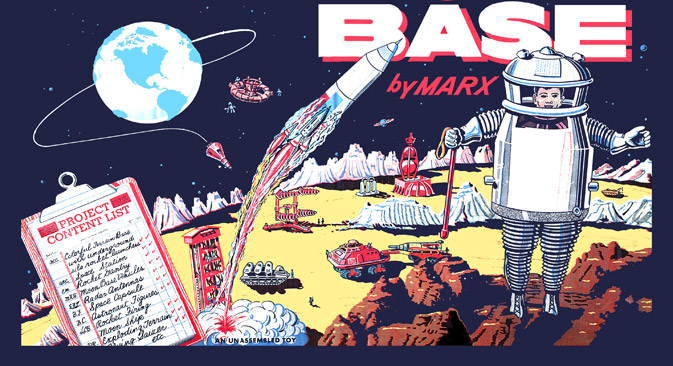 Roscosmos is slated to spend $280 million on the development of a moon base, a mobile manipulator crane, a grader, an excavator, a cable layer and a mobile robot for lunar surface exploration between 2018-2025. Source: Alamy / Legion Media

This summer, the Russian Space Agency (Rosсosmos) announced a number of ambitious projects. RBTH has created a list of the most exciting and expensive ones. Of course, not all of these projects will be fully implemented in the future, but if they are, they could revolutionize space forever.

Humans haven’t conquered space yet, but they have already managed to pollute it. According to the US Space Surveillance Network there are more than 16,200 loose objects orbiting the earth, which has the potential to destroy new space vehicles.

Why a film "about space" has no space in it

There is a chance that the plot of the film Gravity, where two astronauts played by Sandra Bullock and George Clooney are stranded in space after the destruction of their shuttle, could come true.

In August Roscosmos declared their plans to design a spacecraft for cleaning the geostationary orbit from spent satellites and LV upper stages. The project, called the Liquidator, is slated for development between 2018-2025 with a budget of roughly 10.8 billion rubles ($292 million).

Roscosmos plans to spend 900 billion rubles ($24.3 billion) for infrastructure to support spaceports. These funds will be used to build an extension of the Plesetsk cosmodrome as well as to complete the construction of the Vostochny cosmodrome and to support the Baikonur space complex based in Kazakhstan.

However, Roscosmos have come up with a more financially feasible option. If a dispute with Kazakhstan is resolved by 2020 the agency will be required to spend only 800 billion rubles ($21,6  billion). In that case, Roscosmos will be able to use Baikonur, as well as Russian cosmodromes. In that case 100 billion rubles ($2.7 billion) will be freed up to devote to the Vostochny space complex.

The remote sensing of the earth is one of the Russian space industry’s weakest areas. With no national program in place, Russian scientists have to rely on information from international satellites.

But a Federal Space Program (FSP) is slated for development between 2016-2025 and was created by resilient optimists promising to enlarge the orbital fleet by adding 26 hi-tech satellites at a cost of 358.6 billion ($9.7 billion).

The different projects within the FSP include (with projected costs in parentheses):

Resurs, a three-satellite program designed to capture images of the Earth in high and ultra-high resolution (55 billion rubles / $1.5 billion).

ES-SSO is an operating supervision space system for local emergency situations. It is composed of 10 satellites that orbit in synchronicity with the sun (106.3 billion rubles / $2.9 billion).

ES-GSO is a high-operating supervision space system for major emergency situations. It functions on an optical and radar band on a geostationary orbit (44.3 billion rubles / $1.2 billion).

Russian spacecraft were the first to fly over the dark side of the Moon and take soil samples, but they never managed to put a person on its surface.

Roscosmos is currently quite serious about moon exploration. The Agency is slated to spend $280 million on the development of a moon base, a mobile manipulator crane, a grader, an excavator, a cable layer and a mobile robot for lunar surface exploration between 2018-2025.

It appears that Roscosmos wants to be more than just a guest, but a full time resident.

A moon base without a moon vehicle is kind of beside the point, thus Roscosmos is developing a new rover that will search for natural resources. The Moon is full of resources, such as rare earth elements, titanium, and uranium, which the Earth does not have in abundant supply.

It is also rich in helium-3, which is a possible fuel for nuclear fusion. This new moon vehicle is called Moon-Mobile. Development should conclude by 2021, with testing lasting another four years.

In September 2014 plans for a super-heavy rocket with a120-150 ton capacity received preliminary approval by President Vladimir Putin. This rocket is one of the most expensive of Roscosmos’ ideas and its budget is twice as large as the Angara rocket, a popular spacecraft currently in use.

The goal of the rocket is to fly it to Mars; NASA has a similar rocket design under construction. The enormous budget undoubtedly makes this project a risky proposal.

7.    Spectr-RG for the exploration of black holes

In 2013 the Russian-German high-energy astrophysics observatory Spectr-RG was ready to be launched with the purpose of exploring galactic clusters and black holes with the eROSITA Roentgen telescope.

While the idea has been in existence since the late 1980s, the project was only restarted in 2005, requiring $135 million. The project was put on hold several times because of delays from the German telescope developers. The observatory should be ready by 2017.

Read more: Space Oddity: The legends of the Baikonur Cosmodrome>>>