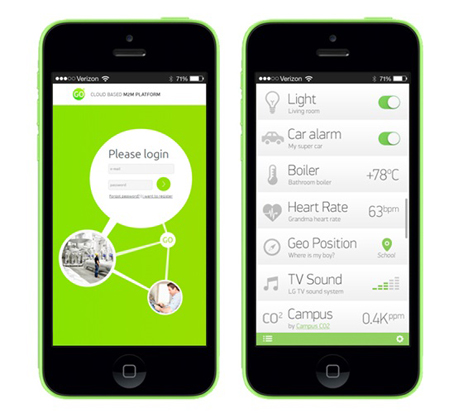 The Internet of Things, an interaction of devices, systems and services with millions of other such “things,” is being developed in Russia. A new cloud service, GO+, is aiming to grab a significant share of this new and emerging market.

The world’s first Internet of Things (IoT) was created by John Romkey, one of the fathers of the TCP/IP protocol, who hooked his toaster up to the Internet. The Internet of People, which it was initially called, transitioned to the Internet of Things in 2009, when the number of connected devices surpassed the number of users. The concept was born at the Massachusetts Institute of Technology (MIT) in the late 1990s and only recently appeared in Russia. However, it has already inspired Russian developers to create new start-ups. A new cloud service called GO+ allows users to unite a variety of devices, quickly deploy their own services and create new ones.

How to operate a coffee machine with a watch

Projects like GO+ are tools that make it possible to introduce various devices to each other. In GO+’s case, it can be any device, even ones that operate on different communication protocols, ranging from gadgets of the “smart home” variety including motion sensors and lighting to more sophisticated instruments. With GO+ users can also customize their own control scripts between devices.

“For example, let’s say you want the coffee machine to prepare a hot coffee for you when you enter the office,” Alexander Grankin, co-founder of GO+ explains. “It will determine your location using a GPS tracker. Then you’ll get a fitness bracelet like the Jawbone, and the coffee machine will, for example, be able to make your coffee with the wave of your hand.”

According to Grankin, everything started with a project involving the development of GPS and geolocation services. At that time it was called machine to machine (M2M) because it was based on transferring data between sensors from one machine to another.

Who will dominate this market?

At its core, GO+ utilizes the architectural concept of the social network. The user adds devices and can give other users access to their data. The user does not have to have a single real device, but can be signed on to hundreds of others in his or her social environment, such as weather stations, transport trackers, air conditioners and video cameras. With this concept, a person can come to a café, sign on to an air conditioner in their GO+ profile and operate it.

Internet services such as Twitter and fitness apps like Moves also fit into the IoT concept. For example, if Twitter and a GPS navigator were joined up, it could automatically broadcast data on the user’s travel directly to their Twitter feed.

Many large companies are procuring solutions in order to combine “things” with the Internet. Google, for example, recently bought Nest Labs, which produces sensors for “smart houses.” “It is possible that the major brands are planning to take over the market this way, so that later they can combine all of the vertical solutions they bought up into one horizontal one,” Grankin says. “Big corporations are preparing to pounce so they can occupy leading positions, because there isn’t a leader on the global market for the IoT yet.”

Vadim Chekletsov, Director of the IoT Russian Research Center and member of the Scientific Council of the Russia 2045 Initiative

The GO+ project is one of the few solutions in the IoT field that has great potential on the international market. This IoT platform, which is convenient and, most importantly, compatible with many standards, is the basis of the coming era of interconnectivity among the objects of the world. GO+’s advantage lies in its unique social network architecture and its capability to connect with any type of device.

Another IoT platform is being developed in Russia called Commandspot, which possesses unique and competitive advantages. Despite the fact that IT giants like Apple, Samsung and Google have greater opportunities to promote their IoT platforms by preinstalling them on their devices and integrating them into their products, small platforms can certainly find their niche.

There will be 50 billion smart devices in the world by 2020. The Internet of Things has the attention of most technology companies – both giants like Google, Microsoft, Intel, and Qualcomm, as well as start-ups. This niche provides an excellent opportunity for budding companies. The potential is enormous. For example, Jasper, an American IoT platform developer, got more than $1 billion during its initial public offering.

Today GO+’s aim is to create protocols for direct interaction among smart devices. A lot of development is under way in open source communities such as OpenHub, HomeSeer, and Connect2.me, as well as in large company alliances like AllSeen Alliance. But some challenges cannot be tackled in isolation. That’s why I like the idea of a platform that ensures cross-platformality. At this point, the security and reliability of inter-machine interaction is not being questioned very widely. I believe that interesting technological concepts in that direction will be in great demand.