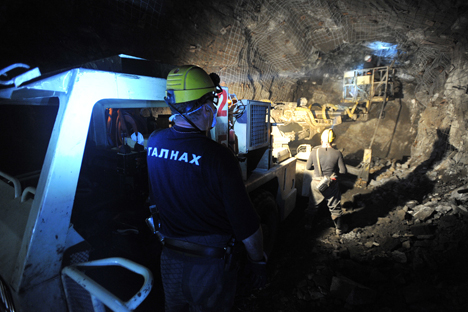 In the next three years, the Urals will launch production using new technology to extract rare earth metals from uranium ore. Scientists expect the project to help Russia return to a market that not so long ago was completely dominated by China.

Scientists from the Ural Federal University have developed a unique technology to extract rare earth metals from uranium ore. Their scientific acumen lies in the creation of a sorbent that makes the extraction possible. Pilot production will be set up using this technology in the near future. According to the scientists, this will slash the Russian market’s need for rare earth metals by a third, reduce the dependence of many industrial sectors on imports and put pressure on China, which has a monopoly on the world rare earth metals market.

Boosting production to bring prices down

Currently, 97 percent of all rare earth metals supplies are controlled by China, which often takes advantage of its monopoly by manipulating prices. Of the 120,000 tons of rare earth metals produced every year, Russia churns out a mere 100 of them, even though the Soviet Union was once one of the world’s leaders in this sector. Russia’s new technology will help boost output by an additional 100 tons within a few years.

Sergei Kortov, a professor of innovation at Ural Federal University, is confident that this unique technology will play a crucial role in import substitution for both raw materials and finished products, an important issue for Russia these days. It will also keep rare earth metals prices at bay on the world market. “There really isn’t this type of production in Russia right now, even though these materials are needed in many industries,” Kortov told RBTH. “Russia would find it economically beneficial to resume its own production of rare earth metals so that prices for the final product don’t increase.”

In the next three years scientists need to create a formula for pilot production of rare earth metals using a unique uranium-leaching technology. To promote this development, the government will allocate 300 million rubles ($7.8 million) to the university and another 360 million rubles ($9.3 million) will be financed by Moscow-based company CJSC Energy Projects, the university’s partner.

Revolution in technology: “Our time has come”

What exactly does this technology entail? Sulfuric acid is pumped underground, which dissolves uranium and rare earth. The resulting concentrate is removed and valuable components are extracted from it using a special processing complex.

The technology is revolutionary in that it utilizes a sorbent that selectively extracts uranium, rare earth metals and scandium from solutions without influencing uranium production. Scientists at Ural Federal University managed to synthesize this sorbent in conjunction with their partners.

The developer of the technology, Ural Federal University’s Institute of Physics and Technology, has been conducting research and development on rare earth metals for years. “We have been involved with rare earth metals for a long time,” Vladimir Rychkov, head of the scientific team and director of the institute, told RBTH. “We have always understood the situation in the world. There was a time when no one in Russia was interested in developing rare earth metals production, but we have been developing a technology for the future. Now our time has come.”

Rychkov hopes the new technology will enhance the efficiency of processing industrial products from uranium ore and facilitate import substitution for rare earth metals and scandium needs in the defense industry, radio electronics, instrumentation, nuclear equipment, machine-building, and the chemical and metallurgic industries. “The product line we are suggesting is enormous,” Rychkov said. “It includes metals, oxides, polishes, pipes, magnets, luminiphores and much, much more.”