Igor Sikorsky: Wings of the future 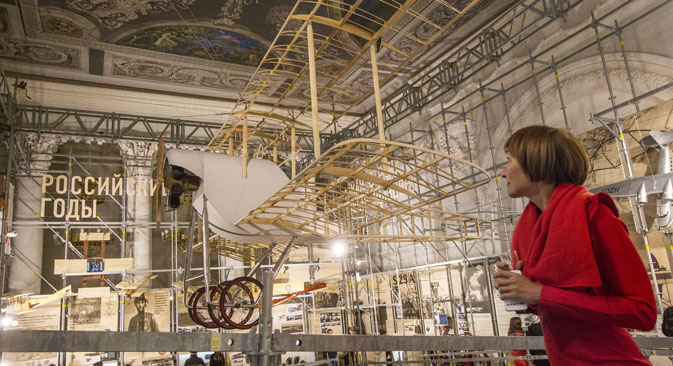 An exhibition honoring the 125th anniversary of the birth of Russian aviation constructor Igor Sikorsky will be hosted by the Polytechnic Museum in Moscow from October 24 to January 15. In the words of Sergei Rykov, the exhibition’s curator, "this exhibition is about how a man invents, dreams and follows his dream all his life, despite all the difficulties."

Igor Sikorsky, whose 125th birthday is being celebrated in 2014, is one of the most famous aviation designers in the world. Opening at Moscow’s Polytechnic Museum on 24 October, the exhibition was made possible by the Sikorsky Aircraft Corporation, who assisted in collecting the exhibition material. The Russian inventor immigrated to the U.S. following the 1917 Revolution.

Sikorsky became famous as a young man. Having endured a series of failures when creating the piloted helicopter, at the age of 21 he built and successfully tested his first S-2 plane. From 1912-1914 he invented the first multiengine Russky Vityaz (Russian Knight) and Ilya Muromets warplanes. The full-size copy of their fuselage is on display at the exhibition.

In Russia Sikorsky was also able to create the world's first serial destroyer, the S-16. However, the October Revolution soon forced him to immigrate to France and then to the U.S., where he founded the Sikorsky Aero Engineering Corporation thanks to financial support from composer Sergei Rachmaninoff.

Having built 18 types of planes by 1939, Sikorsky began producing helicopters. His company was the first to establish mass production of single-rotor helicopters with a swashplate.

The exhibition, "Sikorsky: Wings of the Future," is a continuation of previous collaboration between the Polytechnic Museum and the Igor Sikorsky Historical Archive. In 1999 the Sikorsky archive gave the museum 25 items, including the model of the first experimental helicopter produced in 1909 and the Sunbeam aviation engine. Both can be seen at the exhibition.

"What makes this exhibition special is that it's not planar," says Rykov. "The space at our disposal was not large, but still it gave us some interesting ideas. The exhibition evolves vertically, in the literal and figurative sense. In the exhibition the viewer ascends a spiral, learning about the life of one of the founders of modern aviation and his inventions.”

The exhibits include the Sunbeam and Argus engines, the S-16 propeller, the model of the Russky Vityaz plane, as well as many photographs, documents and even some of Sikorsky's personal belongings.

Sikorsky’s aircraft has landed in Russia

The exhibition was planned back in May 2014 when the organizers contacted representatives from the United Technologies Corporation, Sikorsky Aircraft's parent company.

"We wanted to create a big exhibition, an interesting one and that is why we postponed it for a time," explains Rykov.

"The American company gave us some material, photographs, sketches and other things we didn’t have." Sikorsky helicopters does not currently have representation in Russia.

Sikorsky Aircraft Director Stanley Prusinski visited the opening of the exhibition, however, Sergei Sikorsky, the son of the famous aviation constructor and the heir of his legacy, was unable to attend. "I know Sergei Igorevich," says Rykov.

"And he knows about our exhibition. He wanted to come. But he is old, you know. He will be 90 next year. It would be a difficult flight for him."

Five of Sikorsky's most famous inventions

The BIS-1 and BIS-2 two-column biplanes are among Sikorsky’s greater achievements. The first model did not take off but became a model for its creators. The second BIS had a more powerful engine and after some structural changes was able to take flight, becoming the third Russian airplane to fly in the sky.

The Russky Vityaz (Le Grand, S-21 or the Bolshoi Baltisky) was the world's first four-engine plane. It was created by Sikorsky as a reconnaissance plane in 1913 and set the record for flight duration.

The Ilya Muromets (S-22) was the world's first passenger plane and was built on the model of the Russky Vityaz. It set a record for load capacity (1,290 kilograms), for flight altitude (2,000 meters) and flight duration (6 hours, 33 minutes, 10 seconds). It was used during World War I, when a squadron of Ilya Muromets' became the first unit of bombers in the world.

The Sikorsky R-4 Hoverfly was the first serially produced helicopter in the U.S. It was released in 1942 modeled on the experimental VS-300 helicopter. It had one propeller and was used for communications and rescue missions.

The Sikorsky H-34 was the world's first helicopter to be successfully used for transporting cargo on an external suspension; it was the prototype for the SN-54 heavy lift helicopter. For a long time it was one of the most common helicopters in the world and was actively used in the Vietnam War.