Edward Crawley: Attitude is key to becoming an innovator 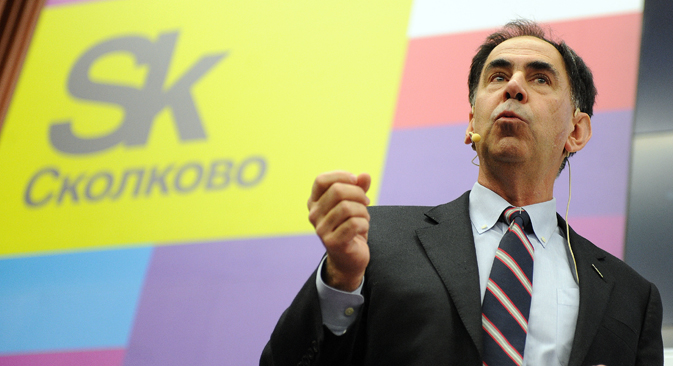 Edward Crawley, a professor at Massachusetts Institute of Technology at the presentation by the Skolkovo Institute of Science and Technology. Source: Alexey Fillipov / RIA Novosti

The Skolkovo Institute of Science and Technology (Skoltech) was recently founded in cooperation with the Massachusetts Institute of Technology (MIT). Almost half of first year students are already involved in startups. Edward Crawley, President of Skoltech and Professor of Aeronautics and Engineering Systems at MIT told RBTH about the driving force behind the success of the new program.

RBTH: Almost half of your students are involved in startups before they even graduate. Why is the program such a success?

Edward Crawley: We have designed the entire education of Skoltech around the idea that our students want to be innovators. We have built a curriculum and a set of experiences to give students the knowledge to become entrepreneurs. They learn how to be creative, critical, prepare a business plan, design a product, identify a market niche. We have three programs at Skoltech now: energy, IT and space.

But what determines whether a person is going to be an innovator or not is mostly about the attitude, about whether they are going to make an emotional commitment to become an innovator. Innovation means building something new and inherently means taking a risk.

So, what we have to do is convince our students that they are able to be successful when they take prudent risks, a very different mindset than one finds at Russian universities and around the world. We also have a very careful admission process.

RBTH: Many believe that Russia is not the best startup environment. Do you think this might change in the near future?

E.C.: That’s what we are trying to accomplish at Skoltech and at Skolkovo in general. We are trying to build an entire innovation system where entrepreneurs will be able to prosper. What we have today is a construction site. But we are starting to see laboratories being developed, new SMEs launched.

There is very interesting data on the impact of MIT and Stanford graduates on innovation. Trillions of dollars of the U.S. GDP comes from graduates of these two universities. Can Skoltech have such an influence in the long run? Absolutely, but this will take time.

RBTH: What was the impact of MIT on Skoltech’s programs?

E.C.: We have been able to identify good practices at MIT but, of course, they exist within the U.S. law. For example, the intellectual property rights are very clear in the U.S., but we can’t change Russian legislation overnight.

The important thing to do is to take good practices from the U.S. and other countries, put them together and adapt them to Russia. Another very important thing is access to funding. Many Russian venture capitalists are making investments outside of Russia because there is an international support system for this.

RBTH:Do you think your students might prefer to implement their ideas in the U.S. or elsewhere, where they’ve got better access to investment and clearer procedures?

E.C.: There is a lot of mobility among international entrepreneurs.

I started one of my own start-up companies in Beijing and Cambridge, Massachusetts. But we try to get students interested in Russia. When we work on projects, they are mostly projects within Russian companies.

So, we are starting to reverse this brain and entrepreneurship drain, when people think that the only option they have is to leave. We are trying to create a Russian option to them and if we make it attractive they’ll stay.

RBTH: Russian universities, even the best ones, are not highly ranked. What can be done to improve their position in international ratings?

E.C.: The global ranking of universities largely depends on the quality of articles published in English and international recognition. And I think that for 20 years the Russian universities have not been internationally recognized simply because they didn’t have resources to travel to international meetings and present papers.

I think the quality of the work, when it is presented in English, would make people recognize scholarship in Russia much more. And the resources, especially going to those universities that are becoming internationally competitive, will allow scholars to travel.

RBTH: India, Japan, China and the E.U. are making impressive progress in space. Do you think this will challenge the space dominance of Russia and the U.S.?

E.C.: I think the emerging space countries (such as India that sent a satellite to Mars and China that has a plan to build a space station) are catching up.

Innovations 2.0: The technology sector is preparing for a reset

I believe the U.S. and Russia just didn’t keep going. The technology that we are using now is largely based on the things we developed back then.

The most reliable launcher in the world today is still the Soyuz launcher, which is based on the design that Korolev developed in the early 1960s.

RBTH: Do you think the competition between the countries might have an impact on the development of space technology?

E.C.: You can argue that it’s good for the technology because it causes different national programs to compete with each other, but it’s very clear that none of the national programs actually have the resources for exciting missions like building a moon colony or sending humans to Mars.

So we have to find the way to balance the desire for the national programs to compete, but also to be able to work together. And this is a difficult formula to find and much more complicated than in the 1960s, when it was just a competition.

For example, the service might help tour operators avoid selling packages to flooded regions or assist agricultural companies seeking high crop yielding areas. It allows users the ability to access remote and complex services with a few clicks of the mouse.

Dream Beamer is a software program that removes a presenter from a projector image. Instead of the blinding light usually beamed onto a presenter’s face, a shadow is placed over the speaker. Dream Beamer has already received a HK$ 100,000 grant from the Hong Kong Cyberport for a proof of concept and has sold four licenses to the Hong Kong University of Science and Technology.

Easy Wallet is a mobile app that gives users advice about the financial services that are best suited to their personal needs. The advice is based on a client’s spending habits and places where they spend money most often. The service takes into account not only the balance and expenditure for each credit card, but also helps set goals and recommends the best credit cards and services to achieve these targets.