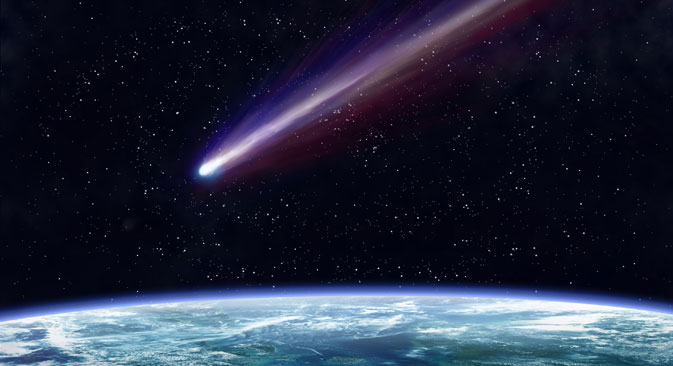 At the end of October Russian astronomers discovered a new cosmic body, which became known as asteroid 2014 UR116. It is 20 times larger than the Chelyabinsk meteorite and there is a possibility that its trajectory will shift towards Earth.

At the end of October the Russian MASTER robotic telescope complex noticed a new asteroid, 2014 UR 116. Its is 370 meters long, about 20 times bigger than the meteorite that exploded in mid-air over the city of Chelyabinsk in February 2013. The cosmic body’s trajectory will run near Venus and Mars, and there is a possibility that its path will shift towards our planet.

The asteroid was discovered by Denis Denisenko, an astronomer at Moscow State University's Astronomical Institute, who has already discovered seven supernovae and more than 50 variable stars. He spoke with RBTH about the potential threat that the asteroid poses to Earth.

RBTH: Where and when, supposedly, can the asteroid that you've discovered hit Earth?

Denis Denisenko: It's still unknown. We estimate that in the next six years it will not collide with Earth. The uncertainty of its position in space during the next encounter with Earth in October 2017 is calculated to be 1.8 million kilometers. It is also impossible to predict the asteroid's future encounter with Mars and Venus, which can substantially change its orbit.

RBTH: If it collides with Earth, will we have a chance of surviving or not?

D.D.: There is always a chance. Asteroids of this size (about 370 meters long) are capable of causing a catastrophe, but not the end of humanity. It is still impossible to predict the date or even the approximate place where 2014 UR116 might hit Earth, just like it is impossible to do so with any other dangerous asteroid.

RBTH: What is the MASTER system? How were you able to discover the asteroid?

D.D.: The system is unique because it is universal and is capable of carrying out several functions simultaneously. The MASTER system is similar to the Catalina Sky Survey, the Pan-STARRS and the Palomar Transient Factory. However, none of the three are capable of reacting to Gamma-ray bursts, those powerful but short-lasting bursts in the universe.

The other analogous systems (ROTSE, consisting of telescopes in the U.S., Turkey, Namibia and Austria, as well as the European BOOTES and GROND) have never discovered any potentially dangerous asteroids.

MASTER intelligent and mobile telescopes, however, have already discovered rays from objects that were so far away that their light was undetectable for the optical telescopes at the Swift space observatory.

RBTH: How do you interact with foreign space agencies?

D.D.: It is possible to follow the extinction of the source of a Gamma-ray burst or create the orbit of a new asteroid only by watching them from several observatories on various Earth longitudes. Two days after asteroid 2014 UR116's discovery, 28 telescopes from 10 countries focused on it. Most centers that collect, process and distribute astronomical information are now located in the US.

These centers include the GCN Gamma-ray burst network, the Central Bureau for Astronomical Telegrams and the Minor Planet Center. The data of potentially dangerous asteroids is analyzed at the NASA Jet Propulsion Laboratory in Pasadena, US and at the University of Pisa in Italy. The names of the new stars are given at the General Catalogue of Variable Stars Research Group in Moscow. Our MASTER project interacts with all these groups, laboratories and organizations.

RBTH: Many other dangerous celestial bodies have already been discovered. Why don't we see any real action aimed at developing some kind of protection from them? Or is it all highly confidential?

D.D.: There are projects in the world that are doing this, for example, the mission of the American NEAR Shoemaker probe studying the Eros asteroid, the Japanese interplanetary Hayabusa probe on the near-Earth Itokawa asteroid, and the European Rosetta mission studying the Churyumov-Gerasimenko comet. Spacecraft are sent to small bodies in the Solar System. Russia is planning the launch of a satellite to study the Apophis asteroid.

Catching a falling star: How a meteorite inspired Chelyabinsk

If we soon discover a rather large asteroid that has a 100-percent chance of colliding with Earth in say 15 to 20 years, then the projects will obviously become more active. So far we do not have a precise date of collision, therefore the danger is only theoretical.

According to 2012 estimates, the Solar System contains about 3,000 to 6,000 potentially dangerous asteroids. Moreover, as the Chelyabinsk meteorite showed, small cosmic bodies can also cause catastrophes. It seems that the danger threshold will have to be moved towards bodies with smaller sizes and an increase in the quantity of asteroids.

RBTH: You have discovered seven supernovae and 50 variable stars. Perhaps you are particularly lucky?

D.D.: The secret of having made so many discoveries is devotion to science, a certain fanaticism in the good sense of the word, and lots of work. But luck also plays a big role in astronomy.

Asteroid 2014 UR116 makes one revolution around the Sun once every three years with a precision of more or less one week. This means that every three years in October it approaches the Earth and becomes bright enough to be seen by search observatories such as the Catalina Sky Survey.

The last close encounter was in October 2011. The asteroid could have been discovered in the course of a week, or week and a half, but no one noticed it back then. Most likely, at the moment of minimal encounter and maximal shine at the end of October it flew out of the Milky Way into the Aquila constellation, where no one looks for asteroids; then it moved really fast and was perhaps unnoticed by the network of asteroidal observatories. Also, in the beginning of November 2011 the discovery was obstructed by the bright moon.

The secret of my discoveries can be summed up by one of Sherlock Holmes' phrases: "To look and to see, to watch and to observe are different things." In astronomy, this is the most important thing.

About the MASTER System

The MASTER robotic telescope system is capable of simultaneously solving many theoretical and practical problems in various fields of astronomy. MASTER telescopes are automatically focused on the sources of Gamma-ray bursts within seconds after being signaled by satellites.

This can lead to the discovery of supernovae, classical and dwarf nova stars, as well as near-Earth asteroids. The list of MASTER discoveries includes almost 20 types of objects that are exotic, unique and first of their kind. The MASTER system was fully developed at the Lomonosov Moscow State University under the supervision of Professor Lipunov.

The brain of the robotic telescope complex is a multifunctional software application that was also created at MSU. The telescopes are made at the Optika Moscow Association. The complexes are developed thanks to state and private investments.