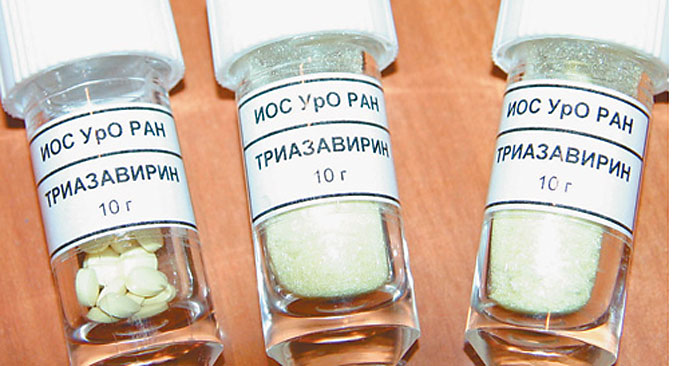 Before the end of 2014 Russian pharmacies will be stocked with the broadly active Triazavirin antiviral medication. Source: Press Photo

Scientists at the Ural State University in Yekaterinburg have created Triazavirin, a new antiviral drug that has a special mechanism for combating viral proteins and that effectively fights a large number of viruses and infections.

Russian scientists from the Urals have created a new antiviral drug that is capable of treating not only sophisticated viruses such as Ebola, but also a series of other common infections and illnesses provoked by influenza viruses.

Before the end of 2014 Russian pharmacies will be stocked with the broadly active Triazavirin antiviral medication, which was developed by scientists from the Chemo-Technological Institute at the Ural State University.

The drug is also effective against Crimean-Congo hemorrhagic fever, Rift Valley fever, the West Nile virus and viral infections that are dangerous for animals. Russian scientists believe that Triazavirin has a chance of becoming the new aspirin, which mankind has been using for almost 150 years.

The launch of Triazavirin was organized at the Medsintez Pharmaceutical Plant. According to the producer's calculations, the optimal volume of production could reach 12 million packets a year. In its first year Triazavirin will be sold only in Russia and only by prescription. In the future Russia also plans to launch the drug abroad.

Kiselyov says that Triazavirin has already attracted interest abroad. For example, two years ago the U.S. successfully tested it against the West Nile virus. In mid-September the drug was presented at a World Health Organization conference in Geneva.

"A comparative analysis of antiviral drugs against the Ebola fever showed that Triazavirin is one of the leaders," explains Kiselyov. "Out of all there is on the world market today, it is one of the best: It is least toxic, it has a good therapeutic index, it can be administered intravenously to the extremely ill and it is compatible with any other type of therapy."

The new Russian development belongs to the "triazolo-triazine" group, which has a special mechanism: It suppresses the earlier stages of cell infection that are vitally important to the virus.

A Triazavirin molecule, by interacting with the virus's proteins, makes the virus nonviable. The drug protects the organism in any phase of the illness. Such drugs have never been used in clinical practices; most of the antiviral medication used today acts by supporting the person's immunity or by eliminating the symptoms of the illness.

Petrov points out that Ural scientists Valery Charushin and Oleg Chupakhin were awarded the State Prize of the Russian Federation for the development of the fundamentals of the triazolo-triazine organic synthesis and the Triazavirin medication.

According to Vladimir Rusinov, a member of the scientific group developing Triazavirin and Director of the Chemo-Technological Institute at the Ural State University in Yekaterinburg, a broadly active antiviral drug already exists in the world: Ribavirin. However, it is toxic; Ribavirin accumulates in red blood cells.

For example, when during the SARS epidemic in China the sick were given an unprecedentedly large single dose of this medicine, the virus was eliminated, but the patient was left with damage to the liver and blood-forming organs. In comparison, Triazavirin's toxicity is practically non-existent.

"During the testing we increased the drug's dosage, but we still weren't able to kill the lab mouse," says Vladimir Rusinov, "which is proof of its insignificant toxicity."

After many years of laboratory testing on mice and primates, the drug was used to treat humans. Clinical testing to study the drug's therapeutic effectiveness on people infected with influenza of moderate severity was carried out successfully at the Research Institute of Influenza in St. Petersburg. The medication had been in development for over 20 years and was a result of fundamental multi-year research, started in the 1990s.

The medication was first highly praised by Russian Health Minister Veronika Skvortsova in 2009, when Russia needed protection from the swine flu pandemic. After this, thanks to the Healthy Ministry's support, the drug went through phase II and III of clinical testing and was registered in connection with the necessity of chemically treating the Ebola fever.

The main contribution to the conclusion of Triazavirin research was made by the Postovsky Institute of Organic Synthesis at the Ural Division in Yekaterinburg, the Yeltsin Ural State University, the Russian Health Ministry Research Institute of Influenza, the Scientific-Research Testing Institute of Military Medicine in St. Petersburg and the Virology Center at the Russian Defense Ministry in Sergiev Posad.