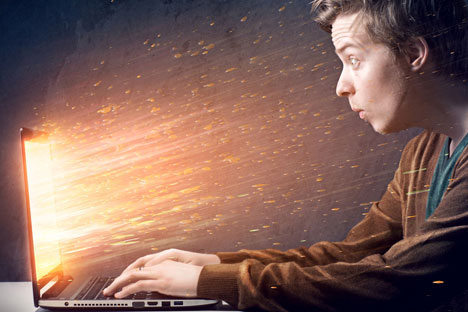 Facebook is looking to buy the first cinematic social network, Cinemawell.com, developed in the Russian city of Yekaterinburg. Source: PhotoXPress

CinemaWell.com, a fledging Russian online cinema developed in the city of Yekaterinburg, has created a social network of cinemas that connects filmmakers with the audience. This startup, which enables users to watch and discuss online films with a selected group of people, has attracted Facebook’s attention.

In late October 2014, Crunchbase reported that a social network of cinemas CinemaWell.com was acquired by Facebook for $95 million. CinemaWell.com’s founder Serge Petrov told RBTH that he was optimistic about the deal. However, he has neither denied nor confirmed the acquisition publicly.

“During the St. Petersburg International Media Forum held in October, we negotiated with many companies interested in partnering with CinemaWell.com,” Petrov said, adding that Facebook was among them.

The founder of CinemaWell.com said that the project’s unique feature, Internet Video Co-Viewing (IVCV), could easily be incorporated into existing social media platforms.

“It is quite hard to predict today what kind of content might be distributed the way that Cinemawell.com suggests,” says Dmitry Pashutin, media research and strategic analytics director of Ivi, Russia’s leading video-on-demand (VoD) provider. “In a world where almost any content is accessible with one click there is no need to wait hours for your film to begin.”

However, Petrov’s idea of scheduled video viewing seems to make sense for online premieres. The startup’s founder says that this option makes the project stand out from its competitors.

Petrov says that independent filmmakers can open their own online cinemas at CinemaWell.com if they don't want to abide by the strict rules of production companies and distributors. Petrov also suggested that the platform is also ideal for those that want to share their art with a large audience and get feedback. Filmmakers can also set a screening schedule and the prices for tickets. They will receive 80 percent of the revenues with the remaining 20 percent going to CinemaWell.

“It’s the first project on the Russian film market where filmmakers can get to know each viewer since all of them will access the online cinema through their social network accounts,” Petrov told RBTH. “Moreover, millions of people can attend a film’s premiere on CinemaWell.com as the virtual cinema can host unlimited number of viewers.”

In August 2013, Petrov tested the service out with an online premiere of Andrei Marmontov’s “The Gold,” a historical drama featuring the well-known Russian actors Sergei Bezrukov and Anna German. According to Petrov, the premiere drew 1,500 online viewers.

In an open letter to his daughter published in early 2014 Hollywood director Martin Scorsese analyzed the new film industry landscape.

“In the future, you’ll probably see less and less of what we recognize as cinema on multiplex screens and more and more of it in smaller theaters, online, and, I suppose, in spaces and circumstances that I can’t predict,” Scorsese wrote.

His reasoning is not far from what is now happening in the online video market that is rapidly expanding all over the world.

According to research published by iKS-Consulting in March 2014, Russia is the largest online video market in Europe with 60 million unique viewers. One third of them, or 24 million people, use the Internet to watch VoD services monthly.

Yet, Russian online video services still offer huge potential through connected devices. According to Megogo, one of the leaders among online cinemas with over 10 million users in Russia, more than 57% of views on Megogo come from Smart TV and mobile devices. The number of Android and tablet users is over 5 million with more than 1.5 million iOS users.

My religion is Facebook and Coca-Cola: Russian art takes on consumerism

“One of the main trends for all players on the VoD market is that traditional television is being replaced by Over The Top (OTT) technology,” Victor Chekanov, the CEO of Megogo Russia said, referring to the content delivered through the internet rather than via a multi-system operator.

Tvigle, another top player on the Russian online video market and pioneer of professional online video broadcasting in Russia, suggests that innovation can get in the way of video distribution.

According to Yakovlev, the legal online content sector is the last remaining segment among all advertising markets in Russia that will still experience growth. He also thinks that the market niche of online cinemas has not yet reached its potential, offering that it is open to newcomers and will see enormous boom in the next 3-5 years.