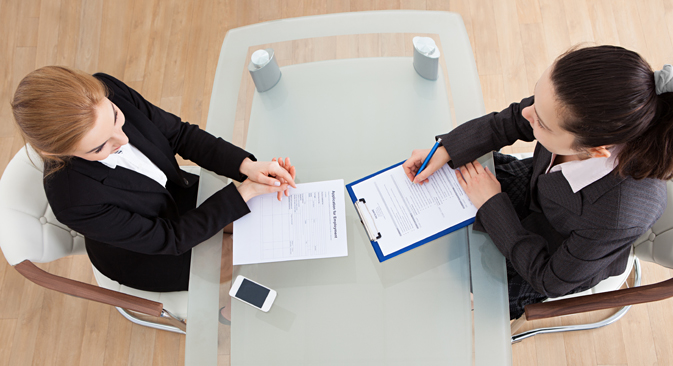 The AmazingHiring application has two functions: searching for a candidate and evaluating their professional qualities. Source: Lori / Legion Media

The AmazingHiring application, which automates headhunting in the IT sector, will be released in the near future.

Russian developers have created the AmazingHiring application for finding IT personnel. It not only searches for a candidate, but also analyzes their professional qualities. Investors believe that the project will be a success: in 2013 the Ukrainian SMRK Investment Fund and the Russian Starta Capital Venture Fund invested $300,000 in the company. In September 2014 the service was able to attract $500,000 in seed funding from SMRK and business angels.

In 2015 the developers of AmazingHiring intend to secure their presence in the Belorussian and Ukrainian markets, and then enter the U.S. and other countries. America already has its analogues to AmazingHiring: TalentBin and Entelo. However, according to the founders of the Russian project, the search systems in those applications do not take into consideration whether the candidates match up with the employers' corporate culture.

Sergei Dmitrichenko, a general director at a recruiting agency, had selected personnel in the IT field for more than 10 years and dreamed of automating the process of selecting and analyzing candidates before interviewing them. "Headhunting" had been done by hand by studying information in social networks and professional communities. The efficiency of the search was low: one recruiter was often able to close only one or two vacancies per month. 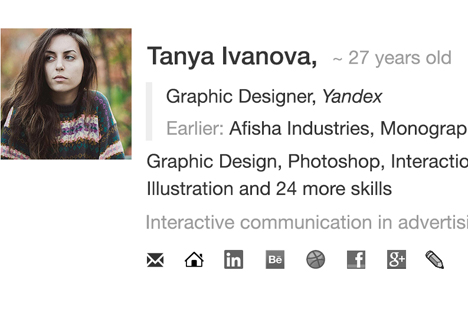 In mid-2012 Dmitrichenko turned to programmer Vitaly Obernikhin for help in developing a special software application. Initially the partners wanted to create an application for personal use, but after two months they understood that many other companies and recruitment agencies would also be interested. At the end of 2013 Dmitrichenko and Obernikhin introduced a beta version of the AmazingHiring web application to the market.

The AmazingHiring application has two functions: searching for a candidate and evaluating their professional qualities. In the first case the system works like a search engine: it processes open sources on the internet such as social networks, professional communities and forums. If the candidate's information is identical on various sites (education, date of birth, mailing address), the system groups the data into one file. 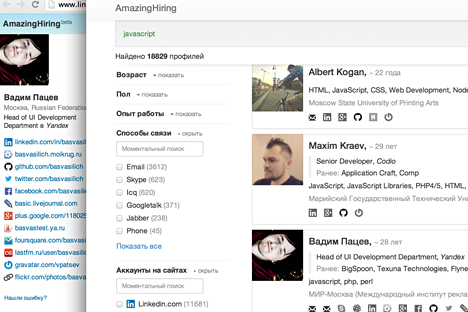 Subsequently, the application evaluates the candidate's professional capabilities and qualities. It analyzes if the candidate is willing to change his current job, how competent they are in their field and so on. According to the recruitment parameters (education, qualification, skills), the application then gives a candidate a score of one to five.

Currently, AmazingHiring helps recruiters effectively select specialists only in the IT field: SAP consultants, Java Script developers, SEO specialists and others. Why did the entrepreneurs develop the product specifically for the IT field?

"Our application selects personnel from the internet because programmers are actively present on the net," says Dmitrichenko. "Moreover, the service is arranged to meet complicated HR requirements, such as selecting candidates according to dozens of parameters." 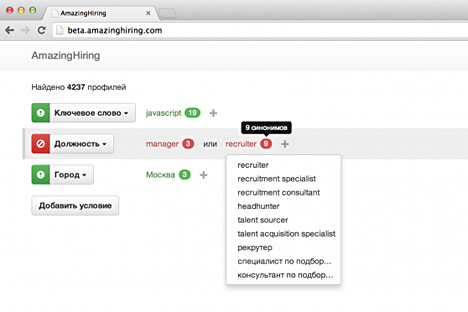 In the future, the entrepreneurs plan to develop software products for selecting specialists in other professions, with the exception of top managers (due to the small market) and line staff (because of the few standard requirements for qualified candidates). By the end of 2014 AmazingHiring plans to launch a web application for recruiting designers.

"We are now perfecting the application and starting in 2015 it will select an employee in view of the corporate culture and the employer's requests, so that the new specialist can ideally fit into the company," says Obernikhin. "To accomplish this, the system will analyze additional factors: the potential candidate's interests, the education, his or her personal qualities, hobbies and other details."

Obernikhin and Dmitrichenko estimate the volume of the current Russian recruitment market at about $300 million and that of automated headhunting services at $170 million.

At the moment, AmazingHiring has approximately 60 clients in Russia who have purchased the application's one-year subscription. The clients include famous tech companies such as Yandex, Russia's largest search engine, and the Kaspersky Lab, a leading developer of anti-virus software.

Small companies purchase the service to recruit one or two employees, with larger companies using it to recruit five or more. At first Obernikhin and Dmitrichenko offer their potential clients a free trial for four weeks, after which they can negotiate their terms of collaboration. Currently, the cost of accessing the program for one recruiter is $500 a month and $3,500 a year.

According to Dmitrichenko, by using AmazingHiring an HR manager can save half of the time needed to recruit a candidate. But most importantly, he can evaluate the jobseeker's competence even before the interview.

Yekaterina Yermolaeva, director of Pruffi, an IT-sector recruiting agency, is doubtful that AmazingHiring will reach beyond the IT field. She agrees that the software does save time in selecting an employee, but it often finds specialists who are already well known to HR managers. Also, the application cannot find professionals that do not have social networking accounts.

AmazingHiring is in the longlist of the 100 highest-rated startups by the Russian Startup Rating, the largest startup evaluation service in Russia. The top 50 out of 1,600 contenders will be presented on the 8th December, 2014.