Profitable conversation: How to make money on chats 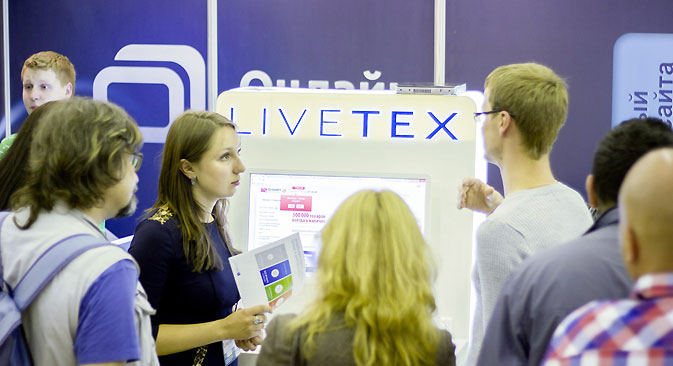 Three years ago LiveTex became one of Russia's first online consultants. In the future the company intends to offer its services to international firms.

A few years ago entrepreneur Vladimir Bakuteev, co-owner of Homework, a network of centers that assists students with their written assignments, established a chat on his company site. The service helped to create personal contact with clients, which often led to sales. But the service had a weak point: the popup chat window. Clients often held a stereotype of invasive online consultants and they would not engage in chats.

Bakuteev needed to find a solution. So, in 2011 the LiveTex online consultant was born. Later, in the summer of 2012, the company started offering the service of LiveTex calls, which helped site users call the company with one click, while helping the company take these calls on either a mobile or stationary telephone, or readdress them to a office telephone operator. 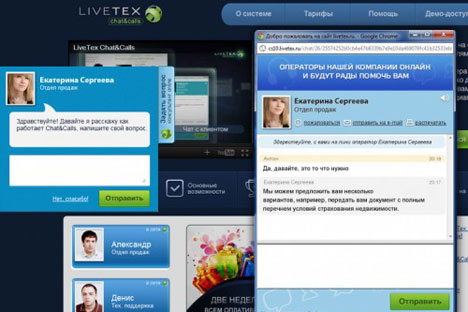 The online consultant service costs approximately $26 a month for one operator in a 12-month plan. Source: Press Photo

In spring 2013 LiveTex launched a lead generator that automatically gathers information on users that follow the site during non-working hours. In October 2014 LiveTex created the X-widget service that connects a client with a manager in 28 seconds. Currently the LiveTex service works as a complete solution, which contains numerous functions, but at the same time has a single management system.

According to Bakuteev, LiveTex services help companies raise the quality of their customer service, increase sales and automate marketing. For example, internet stores show an average increase of online sales of 20 percent, with the number of abandoned shopping carts dropping to 30 percent.

The growth of client requests on car dealer sites is six percent. Car sales, as well as accessories and spare parts, grew an average of four percent. Real estate companies have the potential to increase their sales, while decreasing the number of unfinished surveys on their sites by 30 percent.

Currently, LiveTex has 5,000 clients. Among them are many Russian internet leaders and large organizations, such as the Yota wireless internet provider, the Tinkoff bank, the TELE2 telecommunications operator and the Yulmart online store.

"The Yulmart online store has been using LiveTex since April 2013 and currently has at least 10,000 chats a month," says Bakuteev. "One indication that we are succeeding with them is that 96 percent of the chats end successfully and the average response time is one minute. The HeadHunter online recruiter installed our service in 2012 at a time when less than 10 percent of their customers were willing to use the chats. By the end of 2013 the percentage doubled. Now 50 percent of the incoming communications to the site's technical support area are chats."

The cost of LiveTex services depends on the quantity of connected products that the client needs and the duration of the contract. The online consultant service costs approximately $26 a month for one operator in a 12-month plan. The cost of the X-widget is related to the result of its work: the plan includes quantitative indicators, such as its uptime, and qualitative ones, such as the number of requests.

Currently there are several companies in Russia that offer this online consultant service for sites. According to Ruward Track, in terms of the number of installations, the JivoSite system is the leader. It offers a free version with limited functions.

"Our competitors place their bets on the small business segment, while we focus our aim at medium and large businesses," says Bakuteev.

"We have different pricing systems, marketing approaches and levels of client services. Currently we occupy 50 percent of the online consultant market in terms of turnover."

According to Bakuteev's estimates, in the next year or two the company will use at least four online channels for communicating with clients that automate not only the chat with the site's users, but also the marketing.

Bakuteev believes that LiveTex's share in the world SaaS market in the online chat segment is almost four percent. Currently the company works in the CIS market, but is not opposed to the possibility of expanding internationally.

LiveTex does not disclose its revenues, but in Bakuteev's words in 2013 they increased sales by 85 percent compared to 2012. In the summer of 2014 the Vaizra Capital Fund invested $4 million in the startup becoming its first investor. Vaizra Capital belongs to former shareholders of VKontakte, Russia's largest social network.

According to Sergei Akashkin, senior investment analyst at the Prostor Capital Venture Fund, LiveTex has the potential to succeed on the world market. The service was the first in Russia to offer an online solution for organizing communication between large businesses and their clients.

"In the West large companies such as Kayako, Olark and LivePerson already work in this area," notes Akashkin.

"Hence there are limited prospects there, which is why LiveTex must enter related markets. There LiveTex will be able to fight on equal terms in various niches, including with both small and medium business. But considering LiveTex's strong technical options, it has the potential to become a big international company, one that could compete with them all."

Read more: Investors get a taste of industrial startups at Slush exhibition in Finland>>>