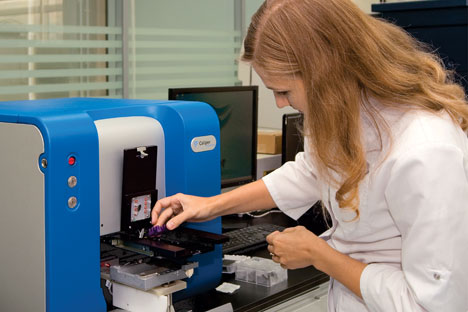 The year 2014 has been a breakthrough for finding cures for cancer in Russia. Scientists propose new methods of fighting the most common and aggressive tumors.

At the end of November 2014, Biocad, a Russian biopharmaceutical company, created a new "smart" technological platform. The platform can be used to develop extraordinarily unique and complex medicine, whose active components are molecules, including some that have never existed in nature. The platform was developed as part of the unique MabNext project, which creates medication based on monoclonal antibodies for curing oncological diseases. They are produced by immune cells and can be used against almost any natural antigen. The platform was developed using new “de novo” gene synthesis methods, high-efficiency screening and mathematical modeling techniques.

"The only successful way to develop the Russian pharmaceutical industry is to create new blockbuster medicines from scratch," says Biocad General Director Dmitri Morozov. Currently the company has more than 10 innovative monoclonal antibody-based drugs that are in various phases of development. Their advantage is the targeted effect that they have on particular cells and molecules. Monoclonal bodies neutralize the tumor without touching the organism's healthy cells.

According to Biocad specialists, thanks to the "smart" platform the laboratory phase of the revolutionary medication for curing one of the most aggressive skin cancers, melanoma, has been completed. The platform was used to select several dozen molecules capable of quickly blocking the functions of the receptor that contributes to the development of this type of cancer, as well as others. Specialists predict that using monoclonal antibodies against the PD-1 antigen will stop the development of the tumor in 30-40 percent of cancer patients. The medication should be available on the market in 2018-2019.

Today a radioactive capsule (microsource) smaller than a rice grain can be implanted in a tumor. The capsule irradiates the small area around it so that the healthy organs and cells surrounding the tumor remain unharmed. A joint project between the European firm Eckert & Ziegler and Rusnano called BEBIG produces microsources for implants in the prostate gland. They have good biocompatibility and ultrasound visualization and are inserted with the guidance of a USI apparatus or computer tomograph.

In August 2014 a new type of cure was introduced in Russia called MIBG neuroblastoma therapy. "MIBG is a metaiodobenzylguandine, a molecule that is actively captured by tumor cells," explains Alexei Maschan, director of the Federal Center of Children's Hematology, Oncology and Immunology. "It includes radioactive iodine, which accumulates in tumor foci and irradiates them from within."

As a result, tumor cells receive a bigger dosage of radiation in respect to traditional radiation therapy. Such therapy prepares the patient for the autotransplantation of bone marrow. The Russian Radiology Center had a special protective treatment room installed to carry out MIBG therapy. The patient must remain in the room a few days after the introduction of the medication, until most of the MIBG leaves the body as the patient and everything they discharge are radioactive during this period.

The 28th Russian Oncological Congress took place in November 2014 presenting 20 innovative cancer cure projects. They were the finalists of the OncoBioMed 2014 competition, a joint project between the Skolkovo Foundation and the RUSSCO professional community of oncologists and chemotherapists. One of the winners, Roman Kholodenko, develops antitumor nanostructures that are capable of connecting tumor gangliosides, substances that participate in the realization of intercellular activity and suppress a tumor's development.

The innovations also included the Biosoft.ru test system for early cancer diagnostics of the large intestine and a new compound founded on platinum and organic substances for curing oncological diseases from the Nobel Company. "Among the more than 200 startups from the Skolkovo biomedical cluster, about 50 develop oncological projects," said the Skolkovo press office. Most of them are still in the preclinical test phase. However, some may appear on the world market in the near future. For example, the clinical testing of a drug from the Incuron Company, based at Skolkovo, is being carried out in Russia and the U.S.