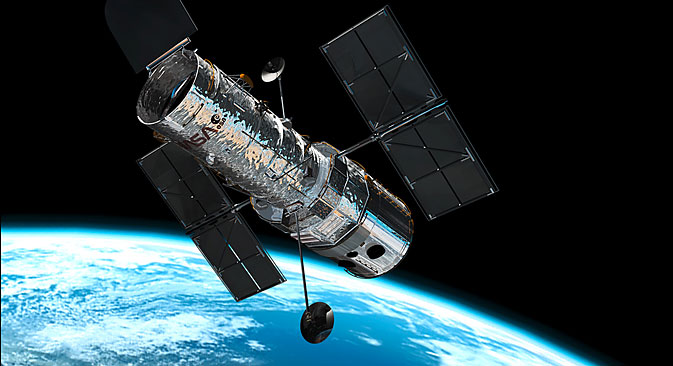 At the end of December 2014 a group of Russian researchers discovered the new KKs 3 dwarf galaxy, which is thousands of times smaller than the Milky Way. Such galaxies are considered satellites of our galaxy and the Andromeda Galaxy.

Russian astrophysicists led by Professor Igor Karachentsev from the Russian Academy of Sciences Special Astrophysical Observatory have identified a new dwarf spheroidal galaxy (dSph). Called KKs 3, the discovery was made on the orbital Hubble telescope. According to the scientists, the new galaxy’s mass is 10,000 times less than that of the Milky Way.

The scientists published the results of their work in the Monthly Notices of the Royal Astronomical Society. In the last 10 years about 30 dwarf spheroidal galaxies have been discovered using systematic searches in the environs of M31, also known as the Andromeda Galaxy. More than a dozen such galaxies have been found in the nearby M81 group. The hunt for isolated spheroidal objects is extremely difficult, since it requires monitoring large parts of the sky and extraordinary attention to highly sensitive details.

"The Hubble can see stars as distinct dots"

Russian physicist Igor Karachentsev told RBTH that it had taken the group 15 years to make the discovery. "We had worked for a long time with our own BTA telescope located at the Special Astrophysics Observatory. We were able to take thousands of photos of the nearby galaxies. The distance of these galaxies can be measured with about five percent accuracy."

The BTA telescope, located at the Special Astrophysics Observatory on Semirodniki Mountain in the Karachay-Cherkessia Republic, was first put to use back in 1977. Back then it was the biggest telescope in the world, although today it is the 18th largest in terms of the diameter of its glass.

Karachentsev said that due to reports on the BTA observation programs, astrophysicists from Karachay-Cherkessia are among the very few Russian scientists whose request to use the Hubble telescope was granted by the international committee.

"Our discovery was made possible due to the Hubble telescope, because the image it shows does not undulate and the stars indicating the galaxies are seen as distinct dots," remarks Karachentsev. "All ground-based telescopes are obstructed by the atmosphere."

The Hubble’s prospects for Russia

The Hubble telescope was launched by NASA into the Earth's orbit and has been of service to the world astronomical community for the last quarter of a century. It functions only upon request. Scientists from all over the world, including Australia, China and Russia, make annual requests to use the telescope for their projects.

Russian scientists find evidence that life may have originated in space

The competition among the requests is high as only one out of every seven projects is approved. Still Igor Karachentsev says that NASA allows astrophysicists from all over the world to use the telescope in order to attract new "minds" and ideas, as well as to have the telescope function at its maximum potential.

Engineers have estimated that the Hubble can work efficiently for another five years. In four years another telescope will be launched into orbit: the even more powerful James Webb Space Telescope.

It has a 6.5-meter-diameter mirror; by comparison the Hubble’s is only two meters. The new telescope will also have enhanced perceptive capabilities as well as other structural improvements. All optical details for NASA telescopes are produced in Arizona.

Read more: The Martian Chronicles of Anastasia from Russia>>>