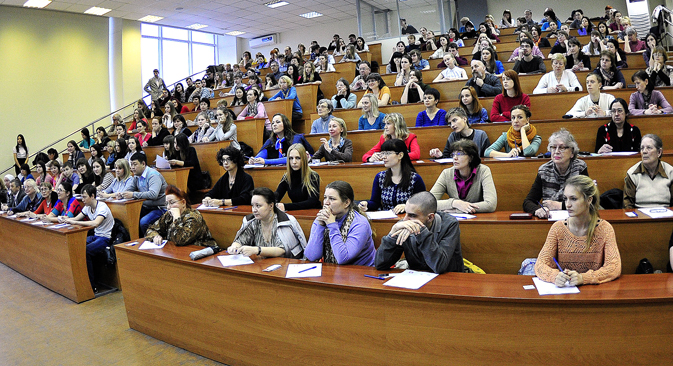 The center will open in early 2015 and simplify the admission process for foreign students looking to enter Russia’s leading universities.

The 15 Russian universities that make up the Global Universities Association are creating a unified center to recruit foreign applicants.

Maxim Khomyakov, the director of the center and vice rector for international affairs at Ural Federal University in Yekaterinburg, told RBTH that the center would open at the beginning of this year.

However, “it will only have a minimal impact on the group [of foreign students] in 2015,” Khomyakov said. “We can expect serious results by September 2016, because in most countries applicants for 2015 have already decided where they will matriculate in terms of both country and university.”

Why does Russia need a recruiting center?

The center’s primary function is to help universities attract highly motivated students to fulfill their budget quotas for foreigners. Quotas for foreign students – 20,000 were allocated to all of Russia’s universities in 2015 – are currently distributed by the Federal Agency for the Commonwealth of Independent States, Compatriots Living Abroad and the International Humanitarian Cooperation (Rossotrudnichestvo). Therefore, the recruitment center will not only attract students, but also enhance the appeal of the 15 universities that comprise it.

To make the quota, candidates should visit the nearest Rossotrudnichestvo office, submit the necessary documents and indicate the universities where would like to matriculate in order of preference.

Yaroslav Kuzminov, rector of the Higher School of Economics, said that not all foreign students selected for the quotas are capable of mastering the curriculum at the best universities. “Many of them face problems with the language or are not able to master the material,” Kuzminov said.

“Universities need to screen them out. In order to overcome that problem, the universities themselves need to participate in recruiting students.”

The members of the Global Universities Association stand to benefit the most from the new center, but Khomyakov says the goal is to promote “the brand of Russian higher education.” Russia is not always considered as an educational option and foreign students “only turn their attention to Russia at the very last minute,” he said.

The center’s duty is to get the best applicants to go to the Rossotrudnichestvo office and apply to the universities that best meet their needs. According to Khomyakov, the center will work “along the entire spectrum of educational fields at the leading Russian universities. They [members of the Global Universities Association] are all very different. The universities are located in different regions and offer very specific upsides.”

Interest in Russian will only grow due to tension, says U.S.-based linguist

Khomyakov says that comparing the various universities shows that they can all stand out on their own merits for different reasons. “With a cleverly constructed advertising campaign, there will be no competition between them,” he said.

Some state quotas are currently allocated directly to the best universities. However, Rossotrudnichestvo distributes the lion’s share of quotas in line with “Russia’s foreign policy priorities and agreements with foreign countries,” Khomyakov said. “For example, if Russia is going to build several nuclear power plants in Vietnam, then it makes sense to promote Russian physics education in that country.”

Read next: Why study Russian? It’s not all politics>>>