Russia ready to show the world where the drugs are 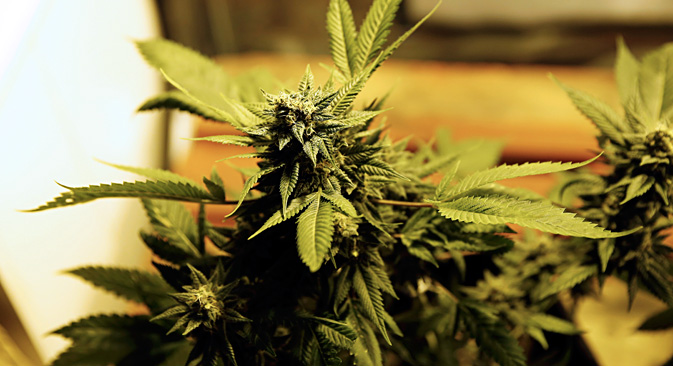 New technology can successfully be used to look for drug cultivations. Source: Reuters

Russian Space Systems will give foreign countries photographs of drug crop cultivations located on their territories.

In the beginning of February 2015 the Russian Space Systems company (RSS) finished testing a system for monitoring drug crops. The spectrozonal photographic technology helps reveal the contrasting areas of land with illegal cultivations all over the world.

The Deputy General Director of RSS, Yevgeny Nesterov, says that the company is prepared to show interested countries photographs of cannabis and poppy fields. This information may be of potential interest to both governments and private companies.

The RSS has its own Scientific Center to assist in monitoring Earth. According to RSS representative Roman Kirillov, the center plans the space photography, carries it out, collects the data, processes it and gives the information to its client. The center receives data from both Russian and foreign space remote sensing space instruments. "We can identify and determine the cultivations that have appeared in a certain seasonal period," remarked Kirillov.

Until recently the monitoring center collaborated mainly within the framework of the Federal Space Program and agreements between the Russian Space Agency and the European Space Agency, as well as space agencies from France, Germany, the U.S., Italy and other countries. However, according to Kirillov, the company is now open to collaboration with commercial enterprises.

The conditions for providing such information will be worked on later, but experts doubt the possibility of commercializing this technology. "Most likely, RSS's main clients will be Russian and foreign government authorities," says Alexei Belyakov, vice president and executive director of the Cluster of Space Technologies and Telecommunications at the Skolkovo Foundation. "It is difficult to commercialize this information, because many photographs come from foreign satellite operators."

How precise is it?

The system of monitoring drug crops from space was established in Russia in the late 2000s. In June 2013 a device known as the hyper spectrometer was installed on the new generation Resource-P remote sensing satellite.

It motivated the development of technology that detects drug crops. However, the instrument was used mainly for updating maps, monitoring concrete situations and protecting the surrounding areas for organizations such as the Russian Ministry of Nature and the Ministry of Extreme Situations.

In December 2014 the Resource-P 2 space apparatus was launched. It increased the center's opportunities for monitoring the Earth regarding hyper spectral observance, information capacity and photographing frequency by two times.

According to Kirillov, the advantages of the spectrozonal photography that RSS uses lies in the fact that this technology helps acquire information on the objects' spectral characteristics. This means that the crops can be identified in the spectrum's various ranges, since they differ in their components.

"It is rather difficult to discover fields that are illegally planted with cannabis or poppy since they are carefully concealed and guarded," says Andrei Shokol, acting director of the Scientific Center for the Operative Monitoring of the Earth. "However, a spectral analysis of the crops helps the satellite detect small cultivations."

Experts believe that the technology can successfully be used to look for drug cultivations, but doubt its 100-percent precision. "The technology has lots of potential and is similar to the one that is currently used for evaluating farmland conditions," remarks Belyakov.

"The unique image on the photograph can help determine the concrete type of drug crop. One photograph can capture a breadth of 30 kilometers. But like all technologies, it still needs to be developed further."

In Belyakov's opinion, after receiving the satellite's photographs it is important to use drones to obtain a more precise idea of the type and dimension of the drug cultivation.

The Federal Drug Control Service is forming a unit to fight drug crime on the Internet, FSKN chief Viktor Ivanov said. "The sluggish blocking of websites which can be reached by those possessing minimal knacks, moreover, anonymously a minute after they are blocked can hardly be called an action of a subject. We need to shift from response to scenario reflexive management of these processes. So, the FSKN is creating a special unit tasked with the effective and targeted deterrence of global drug crime," Ivanov said.