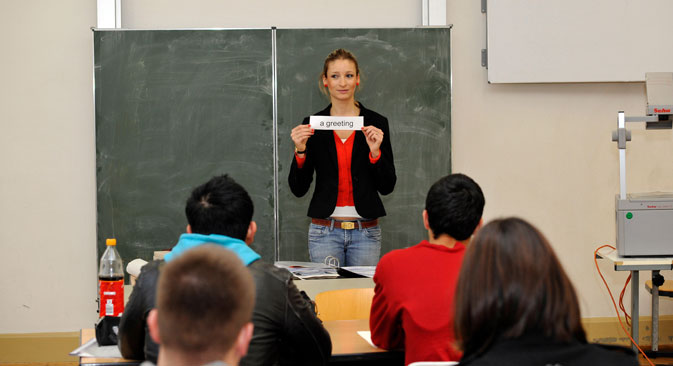 The Easy Ten Russian startup, whose application has been downloaded from the App Store 700,000 times (650,000 of these were in Russia), intends to enter the world market in spring 2015.

"We intend to become the only entry point for those wishing to learn foreign languages, as well as an instrument that could help teachers find new students and teach the ones they already have," says the company's founder Dmitri Zaryuta.

In Zaryuta's words, in comparison to other educational applications available on the market, Easy Ten's unique feature is the simplicity of its interface, as well as the clarity of its study process. Moreover, in using a single method for all languages, which is based on learning separate words, it allows one users to add new languages relatively quickly.

Currently, the application contains seven languages: Russian, English, Spanish, Portuguese, Italian, German and French. It also has several interface languages including Chinese, Japanese, Korean and Turkish, which at present are not available for learning.

Easy Ten's founder says that since launching the first version of the application some users have been able to learn more than 6,000 words. This is why Zaryuta believes that the potential for users is limitless. "Our dictionaries are at the same level for all languages, which is why there are no differences," he says.

The method of memorizing words in the application consists of four components: repetition, presenting the material in small portions, game models and the possibility to select what you want to learn.

Zaryuta says that to learn a word it must be repeated a certain number of times: "The intervals must be as long as possible in order to minimize the frequency of repetitions and create the effect of emptiness, but they must also be rather short so that the user will not completely forget the word."

The presentation of the material in small portions (from one to 20 words per day) is based on a statistic computed by flurry.com, an authoritative service that analyzes mobile applications. According to this statistic, users of educational applications can add vocabulary in as little as 56 seconds per day.

Why do you need to learn Russian?

The gamification process has the user competing with themselves: they take exams that test their knowledge of words and either receive or lose points. After each "circle" they are given a choice: either to go ahead or to beat their own record. With each exam the application suggests new tests, increases the user's involvement and exercises all aspects of their memory.

As for personalization, the user is provided with choices regarding the theme, course and selection of words from the teacher. Alternatively, the application can also make its own recommendations.

"The application takes into consideration the content region that each unique student uses,” says Zaryuta. “For example does the user want vocabulary related to domestic animals, cars or Elvis Presley? No one has ever produced such a mobile gadget."