Professor Moty Cristal: Why culture matters when negotiating with Russians 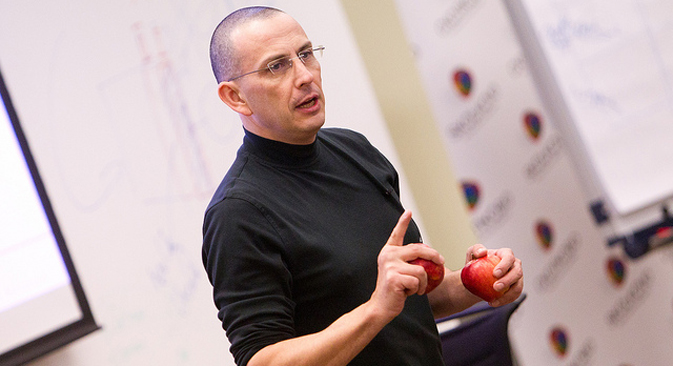 "For westerners, it's simple: you have money, I have a good product, let's do business. It doesn’t work in Russia. You need to invest time." Source: Moscow School of Management Skolkovo

Moty Cristal, a professor of Professional Practice in Negotiation Dynamics at the Moscow School of Management Skolkovo, spoke with RBTH about why Russians avoid bargaining and who is in an advantageous position following the Minsk talks on Ukraine.

RBTH: Does culture matter in the negotiation process?

Moty Cristal: It matters a lot. Negotiations are conducted between people, between human beings. And a human being is a combination of his or her own psychological profile, education system and culture. Culture defines many of the characteristic behaviors of a human being.

For many years the classic negotiation literature coming from America argued that there is a preferred way to negotiate, which is the "win-win" strategy with the classic rational attitude toward negotiation being to maximize profit (a win-win strategy aims to find a solution advantageous for both parties - RBTH).

When I studied at Harvard 20 years ago, cross-cultural elements were still under-appreciated. There was one right way to negotiate: using the win-win strategy. And I, as an Israeli coming from the Middle East, said you have to incorporate cultural elements, because there is not just one right way to negotiate with Americans, Jordanians or Palestinians. Even Harvard did an abrupt turn and acknowledged the fact that culture matters today.

RBTH: Do Russians conduct business negotiations differently from other cultures?

M.C.: Russian people that grew up and were educated in the Soviet era negotiate differently than a young 23-year old or even a 35-year-old Russian entrepreneur or high-tech visionary. Russian business culture has seen a dramatic shift over the past 20 years from a very “sila”-oriented (power - RBTH) negotiation culture.

One of the key elements for a win-win cooperation strategy is the capability to share information. But information sharing is not in the DNA of Russian people. Russians still have a long way to go to adopt or change their mentality from a power-based mindset to an interest-based or a win-win-based one.

RBTH: What would you name as the key difference of the Russian negotiation style?

One is what I call empire perspective. Russians do perceive of themselves as belonging to an empire. This is why some elements that are very common to the rest of the world, Russians are very bad at. They don't know how to bargain, because they prefer to negotiate. They think, “I see the big picture; I see negotiations as a battle.” In going to the market, I leave it to Indians, Tajiks or Uzbeks. This is why I say to my Russian colleagues: if you go to India to negotiate a project, take an Uzbek or a Tajik as part of your negotiation team. Because they are very good at bargaining.

Doing business in Russia: Tricks of the trade

The second element is the concept of “otnosheniye” (relations - RBTH), which is a fundamental value in Russian culture. The idea is, if you don't trust someone, you don't share information. This is why in order to do business you need to have very, very good and deep otnosheniye with your partners. In order to have good otnosheniye, it has to be tested over a long period of time. And this contradicts the Western mindset that time is money.

The West sees relationships in a very instrumental way. I can pick up the phone and call the supplier that I worked with five years ago and say, you know, I want to reestablish business. In Russia it will not happen. Here you have to work to build otnosheniye. I ask Americans and other westerners, how much time you think you need to invest just in being social - drinking, eating, going fishing or going bowling just before you get to start talking about business. For westerners, it's simple: you have money, I have a good product, let's do business. It doesn’t work in Russia. You need to invest time.

RBTH: Is this the same way that negotiations are done in politics?

M.C.:It's different, because there is no win-win outcome in politics today. There is what we call a strategic alliance, or alliances, which reflect some sort of the win-win idea in a sense, that sides have the same strategic goals at one particular point of time. There are alliances that are much deeper, like those between the U.K.-U.S. and Russia-China. In politics sila is the only game in town, although in business this is not always the case. In business I can be a very small player with no funds, but I have the technology, the knowledge. But politics is the pure power game.

RBTH: Let's take an example. Who do you think won the Minsk talks over Ukraine?

M.C.: I think that looking at it from a perspective of winning and losing is a completely wrong perspective to analyze the situation. You need to adopt a systemic language of equilibrium or patterns, or dynamics. Currently the West is managing to generate the dynamics that corner Russia more and more. You can talk about strategic victory or tactical victory.

I have no clue what Russia's end game is, but it wanted results. There are so many possible outcomes to the current situation. At least the West clarified what their strategic aim is: to get Russia out of Ukraine and bring Ukraine closer to the E.U. and the West.

Why today’s Russia and the West cannot understand each other

The West’s behavior shows that - I see it as a negotiator - they have already given up on Crimea. If the parties were able to stabilize the equilibrium, that Ukraine is Ukraine and is closer to the E.U. and Crimea goes to Russia, I think that this is a kind of equilibrium that the West would have accepted. The question is what is Russia's end game? In today’s politics the definition of power “full” or power “less” is completely different. Russia cannot use its military might because of the consequences, because of many things. But there is no doubt that if Russia wanted to it could occupy Ukraine in three hours. Why don't they do it?

The big question is, to what extent do you define your interests or prioritize your interests. What is more important for the Russian government: to continue the fight and support the militants or get the sanctions lifted? But this decision will not wait forever. Today with oil prices going down, I think priorities should be with economic decisions rather than political goals. But, tomorrow oil prices could be on the rise and the decision could change. It is a dynamic system.

Infinity minus infinity: The future of mathematics and technology>>>

Yaroslav Sergeyev has invented a new kind of arithmetic and patented the "infinity computer" in the U.S. and Europe.