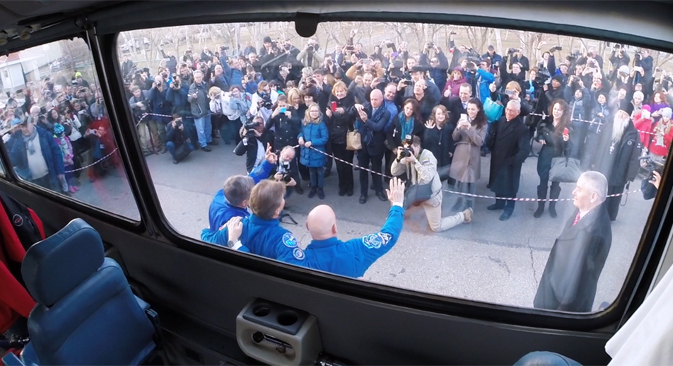 Russian cosmonaut Mikhail Kornienko and NASA astronaut Scott Kelly have recently embarked on a marathon 342-day mission aboard the ISS. It is a historic endeavor as no one has ever spent more than seven months aboard the ISS. But what does it take to boldly go where no man has gone before? Let’s take a look at the preparations the team went through before lift-off and watch the first footage sent back from the station.

1. The crews always arrive at the launch site two weeks before lift-off.

2. During the next 14 days the astronauts and all specialists that work with them live in an enclosed and secure area. This is called an “observation regimen” and has but one purpose — to prevent the astronauts from falling ill.

3. The team’s daily routine involves a lot of physical exercise, including workouts with special equipment designed to partially simulate weightlessness.

4. Twelve days before lift-off, the astronauts take part in something they call “spacecraft fitting.” At this stage, the team members try out their spacesuits to check their quality. The commander and flight engineers also test communications and navigation tools.

5. The spacecraft and spacesuits are brought to Baikonur Cosmodrome several months before the launch so that there is time to double-check everything and fix any problems.

7. Precisely two hours and two minutes before the launch, the astronauts enter the ship. The psychological support team helps them relax and they put on some music.

8. The team working on the launch comprises 500 people.

9. A flight to the ISS takes about six hours.