Astronomers have found water molecules in a distant galaxy 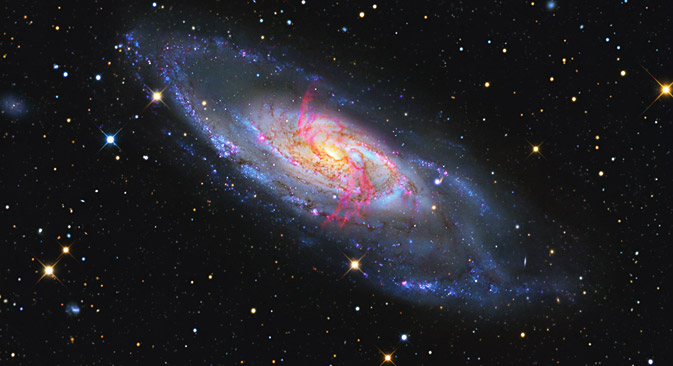 Seen in the light emitted by hydrogen molecules when they become ionized, these arms display an artificial red hue to make them visible in the image I produced. The extra arms are now believed to be caused by high energy jets emanating from an active 40 million solar mass super-massive black hole menacing the galaxy’s center. Source: GaBany / NASA

For the first time, water molecules were discovered in a black hole at a distance of 24 million light-years from Earth. Astronomers have found this H2O-like substance thanks to a new method that enables the measuring of distances to extragalactic objects more accurately and to study the structure of the universe. RBTH has tried to find out what this discovery means for science.

In April 2015 Russian astronomers reported the successful registration of water molecules in the remote galaxy NGC 4258, located at a distance of 24 million light-years from Earth in the direction of the constellation Canes Venatici. The discovery was made by scientists from the Kourovka Observatory of the Ural Federal University (UrFU), together with colleagues from the Astro Space Center of the Lebedev Physics Institute, the U.S., Poland, Holland and China.

What does water in a distant galaxy mean? It is not necessarily indicative of the existence or possibility of the origin of life, according to Andrei Sobolev, head of the study program of cosmic masers (acronym for ‘microwave amplification by stimulated emission of radiation') at the RadioAstron project and a senior researcher of the UrFU Astronomical Observatory. "In this case, the radiation of water has been registered in the area of a supermassive black hole,” Sobolev told RBTH. “Life like ours is impossible in such conditions."

For the first time data was obtained by ground-space interferometry, a method capable of giving a fantastic image featuring detail and accuracy of the measurement of the object’s position. Observations were made with the help of the RadioAstron project, which consists of a radio telescope on a Russian satellite and ground-based instruments located in different countries.

The new method can significantly improve the angular resolution of a telescope, so it is possible to distinguish very fine details. With the use of the RadioAstron project, the potential to improve the ability to zone in on a particular item is as high as 25-30 times. This will enable scientists around the world to much more accurately study the structure of the universe. Additionally, this should help them measure the distance to objects inside our galaxy and beyond, explore the motion of gas in areas where stars are formed and near supermassive black holes and explore the nature of unique space objects.

"Scientists have shown for the first time the possibility of such observations using the new method,” Sobolev said. “It significantly exceeds the capacity of any ground instrument. Now, scientists around the world will be able to measure the position and velocity of space objects and determine the distance to them much more accurately. This project gives us a specific tool for studying the structure of our entire universe."

The authors of the method

The method of interferometry was invented by the head of the international project RadioAstron Nikolai Kardashyov, along with Gennady Sholomitsky and Leonid Matveyenko. According to Sobolev, the first space satellite with a radio telescope on board was launched as part of the project HALCA by Japan in 1997, but this tool was not able to observe water masers. Because of the accident at Fukushima and several other factors, Japanese research in this area was interrupted. China is also conducting work on a project in space interferometry.

The UrFU Astronomical Observatory is located in the village of Kourovka 80 kilometers from Yekaterinburg. The large team that studies the cosmic masers as part of the RadioAstron project includes scientists from Japan, the U.S., the Netherlands, Australia, China, Germany, Spain and other countries. "This work cannot be developed without broad international cooperation, with radio telescopes located throughout the world," said Vladimir Kruzhayev, the UrFU vice-rector for science.

Cosmic masers are natural "lasers" within the radio range with unique properties. They are extremely bright – a trillion times brighter than our sun. The observation of masers permits the ability to measure the distance to space objects and the speed of their movement using a direct method. By these measurements, scientists were able to study the structure of our Galaxy. The RadioAstron project, which enables scientists to see Sun-sized objects at a distance of more than 2,000 light-years, has opened the possibility of taking direct measurements of distances to other galaxies. 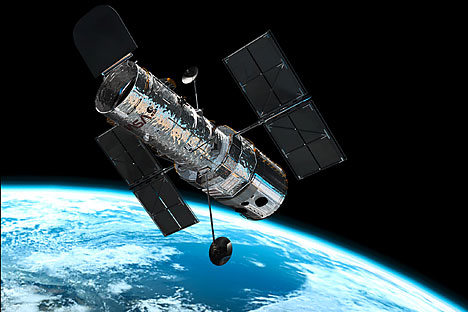