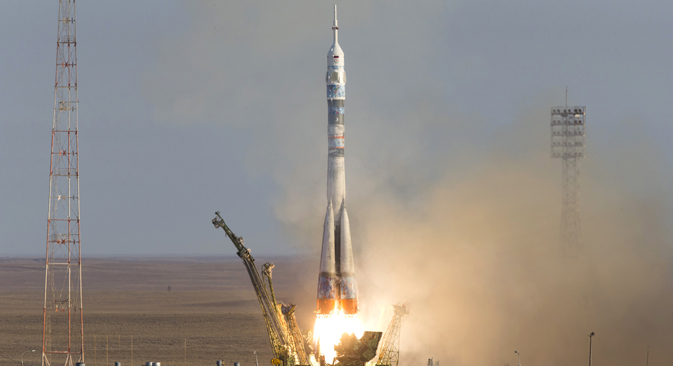 An RBTH correspondent visited the largest space center in the world, the Baikonur Cosmodrome, which marks its 60th anniversary on June 2, and the newly built Vostochny Cosmodrome in order to peek into the past and reflect on Russia’s future.

Baikonur was the first cosmodrome in the world and to this day it remains the largest. It was from here that the first rocket, with the dogs Belka and Strelka, was launched. Yuri Gagarin became the first human to journey into space after launching into the cosmos from here. After the collapse of the USSR, Baikonur ended up in a different country – Kazakhstan. Russia continues to lease the facilities. In 2004 the presidents of the two states signed an agreement extending the contract through 2050.

In 2007 Russia decided to build a cosmodrome on its own soil. The new site for the ambitious plans will become the Vostochny Cosmodrome in the Amur Region in Russia’s Far East. Many await the completion of its construction. The Russian Space Agency (Roscosmos) is waiting, as are those that dedicated their life’s work to Baikonur. Years ago, they left everything to come here and start their lives over from scratch. They are somewhat anxious, as they don’t what lies ahead for them.

Desert in the middle of an oasis

I went to Vostochny before flying to Baikonur. My flight from Moscow to Blagoveshchensk was in the evening. I could not sleep and instead looked out the window at the changing clouds and red-orange sun for nearly the whole flight. We were in the air for about seven hours. 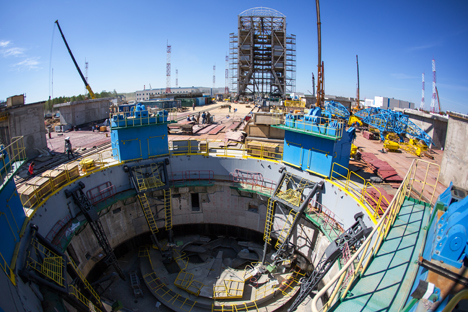 View of the flame deflection structure at the Vostochny Cosmodrome in the Amur Region. Source: Igor Ageyenko / RIA Novosti

At the airport we got into cars and drove along a bumpy road for another four hours to the distant city of Uglegorsk. Black squirrels and grey hares keep running across the road. We made a stop on the steep banks of the Zeya River. The panorama that unfolded before me took my breath away.

The next day we went immediately to the Vostochny construction site, 20 minutes along the road through an absolutely blinding sandy cloud of dust. The construction workers, already accustomed to inspections, paid no attention to us. “And what did you come to see?” a grey-haired friendly man asked us when he met us at the facility. “There is nothing in here, only a fence, sand, dogs…” However, the launch pad already loomed through the sand. And the first buildings of the future city Tsiolkovsky are rising in the village.

A new space story is being written here. The Vostochny Cosmodrome is supposed to ensure Russia’s independent access to space. In time it is slated to become a major center for space research and create new opportunities for the development of the Russian Far East and give a new impulse to the Russian space industry. However, the date for the cosmodrome’s opening keeps getting pushed back and the process itself is accompanied by scandals tied to the waste and embezzlement of construction funds.

Oasis in the desert

Before embarking on my exciting flight to Baikonur, I had to write so many letters and send so many requests to so many different government offices that all the joy of the upcoming trip nearly evaporated; every step was coordinated. Approval had to be obtained for each little detail and my mobile phone never stopped ringing.

We flew for just over three hours. The view did not change for the entire last hour of the flight. We land on the steppe. An employee from the security service of the cosmodrome is there to greet us at Krayny Airport. We go through many security checkpoints. “Tatyana, I understand that everything needed to be checked in the 1960s. But there probably aren’t any cases of espionage now, are there?” I say after yet another document inspection. “You are wrong in thinking this way. All sorts of things happen here,” Tatyana replies. Seeing my eyes grow wide, she lets it be known that no details will be given out. 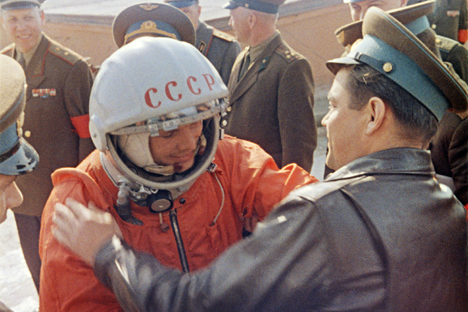 Finally, we reach the entrance to the city. A wistful camel stands at the gate. As soon as we get through the security checkpoint, to the left and to the right, green trees begin to flash in view, as if we have entered a new climate zone. The city has one foot in the USSR. It is seen in everything – the central market, the signs, the lack of 24-hour cafes. Half the city is dressed in the same uniform. They all work at the cosmodrome.

They were the first

In Baikonur everyone tells stories about the first Russian rockets, the cosmonauts. Here at Baikonur there are those that worked alongside the ingenious Soviet designer Sergey Korolev. These are the people that made Russia’s first space launches happen.

Over half of the world’s first space launches were made at the Baikonur Cosmodrome. It was from here that Earth’s first man-made satellite was launched. Among the many aircraft sent from here were the manned spacecraft series Vostok, Voskhod and Soyuz; the Salyut space stations; Mir; the reusable Energia–Buran system; interplanetary spacecrafts; and scientific and military satellites. To this day, Baikonur is among the world leaders for launches per year.

Tatyana accompanies me for all three days in Baikonur. “You know, I am 43,” she says. “And I don’t know what’s ahead. Everything is here. My whole life is here. I understand that no one will take us there - to Vostochny. I don’t know what will happen to us. Although they have said that they won’t give up on Baikonur until 2050…” Tatyana looks at me. I remain silent and am surprised by her worries. She is prepared to relocate to the distant Amur Region and start everything all over. Again.

There is an extraordinary pitch-black sky over Baikonur. And there are extraordinary people working there, people who lit up and still light up the stars of Russia’s space history. 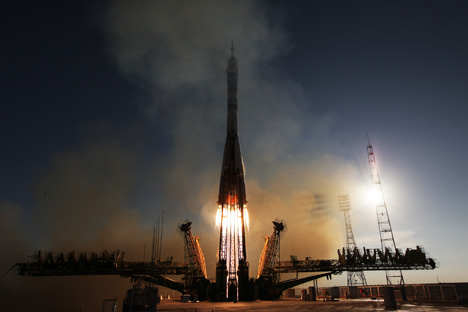 Space Oddity: The legends of the Baikonur Cosmodrome