Earth in danger of being surrounded by rings of debris 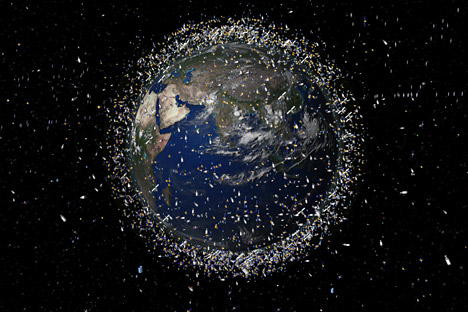 70 percent of all catalogued objects are in low-Earth orbit (LEO), which extends to 1200 miles above the Earth's surface. Source: ESA

The International Space Station (ISS) could become equipped with an ultra-modern laser gun to help protect it from space debris. However, according to scientists this may not be enough. Without a comprehensive approach to the problem, within 200 years debris could form rings around the Earth similar to the ones surrounding Saturn.

In 2017, the ISS will set up the Extreme Universe Space Observatory, which will monitor space debris. If the project proves successful the scientists will develop a laser gun. It is expected to fuse dangerous particles from a distance of about 100 kilometers and then direct them towards Earth where they will burn up in the atmosphere. The project was developed by the Riken Computational Astrophysics Laboratory of Japan.

Scientists believe that lasers represent just one of the possible way to clear low Earth’s orbit of unwanted particles. Russia is planning to create the Liquidator satellite scavenger by 2025, which will remove parts from defunct satellites. The Lomonosov satellite, which will observe space debris, is set for launch in December 2015.

Space debris flies at a speed of about eight kilometers per second. “The problem is very pressing,” Alexander Zheleznyakov, a scientist at the Tsiolkovsky Russian Academy of Cosmonautics, told RBTH.  “In recent years, small pieces of debris often hit spacecraft, causing serious damage. A two-centimeter piece of debris can completely destroy a spacecraft. If even a grain hits a piloted spacecraft, it will cause depressurization and the death of astronauts.”

Where does orbital debris come from?

Scientists around the world are trying to solve the problem of space debris. According to Ivan Moiseev, the scientific director of the Space Policy Institute, until recently, Russian and American space services were trying to track the movements of debris pieces during launches of spacecrafts or to correct their orbits. “The laser is useful because it can heat up the debris,” Moiseev says. “When it starts evaporating a jet thrust is created. The debris flies towards the Earth's atmosphere and burns up in it.”

The space debris issue became particularly acute after the collision of satellites Cosmos-2251 and Iridium 33 in 2009. The incident literally “showered” low Earth orbit with debris at an altitude of 700-900 meters. Scientists have counted tens of thousands of large fragments of a few centimeters in size and millions of smaller ones.

Another case that seriously complicated the work of space services was an experiment by the Chinese military after they shot down their own weather satellite in 2007. “The fragments of the missile and the satellite will always revolve around the Earth,” Moiseev says. He believes that in order to prevent similar disasters in the future, it is necessary to introduce a legal framework for regulating space. Additionally Moiseev thinks that the countries participating in the ISS project should agree on how to share the costs of a laser gun being developed by Japanese scientists. “Until a decision is made, nothing important can be done,” Moiseev adds.

The situation is close to critical

Mankind began studying the problem of space debris in the early 1990s. Back then scientists from the U.S. and the Soviet Union had already prepared a number of major forecasts that are starting to come true. According to some experts, the situation is gradually getting out of control.

“It is thought that the amount of debris will be critical when it will start reproduction (of debris) on a mass scale,” says Yury Zaitsev, head of the Institute of Space Research. “We are now at a level that can be called close to the critical point.”

According to Professor Andrey Nazarenko, author of the book “Space Debris Modelling,” debris fission causes a dangerous process when fragments collide at high speeds. “Measures such as lasers are local,” says Nazarenko. “They can solve the problem of safety for one spacecraft or satellite. According to our estimates, in some 200-300 years humans will not be able to launch spacecraft because space debris will form rings similar to Saturn's rings around the Earth. Our planet would simply be constrained by these small particles. It is possible that this could lead to serious climate changes.”