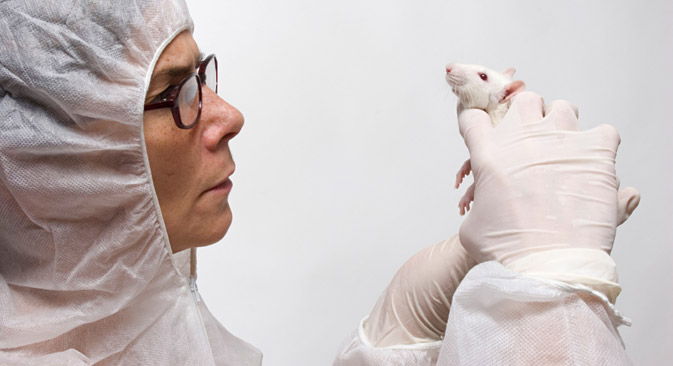 The scientists studied three areas of rats’ brains: the midbrain raphe nuclei, the hippocampus and the frontal cortex. The two test groups of rats exhibited some significant differences in the structure of these areas. Source: Alamy / Legion Media

Siberian geneticists have discovered a correlation between aggressive behavior in rats and neurodegeneration. The researchers hope their study could help cure neurological conditions in humans, although research in this area is just beginning.

It is a well-established fact that the loss of brain cells leads to various neurological diseases, including Parkinson's and Alzheimer's. But as a study recently published by the Institute of Cytology and Genetics (IC&G) of the Russian Academy of Sciences suggests, there could be much more to it than that.

According to the study, the loss of brain cells could also be the cause of aggressive behavior, which had been, until recently, considered a personality trait rather than a disorder. The Institute's geneticists claim that it is possible that people become aggressive not because of their environment or difficult circumstances, but due to biological factors. For now the scientists’ conclusions mainly come from their studies on rats, although they hope to extend research to humans in the future.

The experiment conducted by the researchers involved two strains of rats bred for 40 years in IC&G's evolutionary genetics laboratory in Novosibirsk. The strains were bred from common brown rats. For about 75 generations, they were selected based on one trait: how comfortable they were around humans. Some of the animals were friendly and calm, while others acted with hostility. Observing their offspring, the scientists remarked that aggressive behavior was hereditary.

“During the past few years our lab has been conducting comprehensive research on several proteins, including brain-derived neurotrophic factors, or BDNF (a protein encouraging the growth of new neurons, found mostly in the brain),” says Vladimir Naumenko, a doctor of biology and the head of Neural Genomics Laboratory at IC&G. “We suspected this protein was involved in the regulation of aggressive responses. So, we decided to test our theory using selected rats to find out what was going on in there.”

It turned out one of the possible causes of aggressive behavior involves the loss of brain neurons, which happens at the early stages of central nervous system formation both in humans and in animals. After birth, some of these cells die and those that remain form the structure of the brain. If the number of lost neurons is too high or too low, it can lead to serious mental illness later in life.

The scientists studied three areas of rats’ brains: the midbrain raphe nuclei (neuron clusters found in the brain stem), the hippocampus (a major component of the brain located in the medial temporal lobe) and the frontal cortex. The two test groups of rats exhibited some significant differences in the structure of these areas.

The aggressive rats had high levels of the proBDNF in the hippocampus and the mibrain raphe nuclei. Unlike BDNF, which is required to form new connections between neurons, its precursor proBDNF acts in reverse, being responsible for the death of unnecessary cells.

“To determine what actually happens in the brains of rats, we will need to carry out further studies, counting the cells and taking into account other factors of cell death,” says Naumenko. But the data already gathered by the scientists suggests the death of cells happens more rapidly in “mean” rats.

The research by these Siberian scientists sheds some light on the mechanism of brain cell death and its influence on behavior in rats. Additional studies are needed to show whether the same principle applies to human brains.

“Even now we can say that highly aggressive behavior could be referred to as a neurological disorder, and perhaps someday it could be treated like depression,” Naumenko says. “However, it is unlikely that would happen anytime soon. Our research is just a first step in proving this link. Besides, the neurotrophic factor we are studying is far from the only cause of brain cell death, there are numerous other factors. That's why we will need to conduct additional experiments on animals, before proceeding to tests on humans.”

According to the biologist, once the exact mechanism behind this process is understood, people could find a way to modify the behavior of aggressive people. “That said, we are simply studying the genetic phenomena, and influencing them is outside our field,” Naumenko adds.