Cloak, dagger and scientific brilliance: The making of the Soviet atom bomb 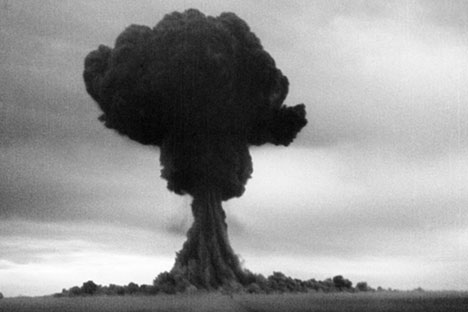 The nuclear arms race began over 60 years ago, and according to the Stockholm International Peace Research Institute today there are about 15,850 nuclear warheads shared by the United States, Russia, the United Kingdom, France, China, India, Pakistan, and North Korea. An estimated 1,800 of the total warheads are on high alert.

The Soviet Union entered the nuclear club on August 29, 1949 at exactly 7 a.m. when a blinding flash lit up the Semipalatinsk test site area, followed by a loud crackle of electric wires that quickly died out leaving only silence. The test of Soviet Union’s first atomic bomb, the RDS-1, was successful.

The nuclear arsenals of the United States and Russia

The Soviet Union surpassed the United States in terms of total number of nuclear missiles in 1969, outmatching it by the total number of warheads in 1977. The American nuclear arsenal peaked at 31,255 warheads in 1967, while the Soviet arsenal reached its peak at about 45,000 in 1985. Currently, under the terms of existing agreements, Russia and the U.S. exchange data on the status of their nuclear forces twice a year, on March 1 and September 1. According to the latest data, as of September 1, 2014 Russia has 1,643 active warheads, while the U.S. comes a close second with 1,642 warheads.

Engineers began working on the project in 1943 after Soviet intelligence agents in the U.K. acquired classified scientific information on nuclear energy. Several spies had also infiltrated some of the U.S. nuclear research facilities.

“The data on the American plutonium bomb obtained by our agents made it possible to avoid several errors during the development of the RDS-1 device, helping to reduce time and costs,” Professor Valentin Kostyukov, head of Russia’s Research Institute of Experimental Physics in the city of Sarov, told RBTH.

Since the early 1940s the U.S., the U.K., and the Soviet Union were racing to create a nuclear weapon. At the end of 1941, the American government allocated huge funds for nuclear research, and the result was “The Gadget,” an implosion-design plutonium bomb, detonated on July 16, 1945 in New Mexico as part of the Trinity test.

Now was the time for a demonstration of power. The U.S. wanted the world, and the Soviet Union in particular, to see their newly acquired destructive capabilities. Japan, an ally of Nazi Germany, was selected as the target for the strike to end the Pacific War. On August 6, 1945 the U.S. atomic bomb, Little Boy, was dropped on Hiroshima. Three days later on August 9, Fat Man was dropped on Nagasaki. Hundreds of thousands of Japanese were killed in seconds, while others were doomed to a slow death of radiation sickness. 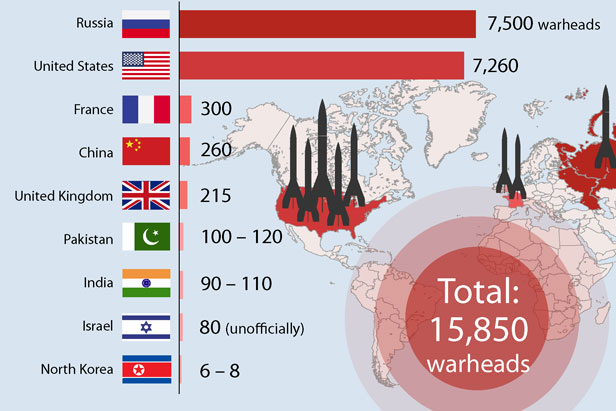 The atomic bombing of the two Japanese cities was a shock to Soviet leader Joseph Stalin. The development of nuclear weapons promptly became one of Moscow’s top national security priorities. The USSR’s best and brightest, including physicists Igor Kurchatov and Pyotr Kapitsa, began working on the project.

A triumph of Soviet science and intelligence

The data gathered by Soviet agents saved a lot of time.

“It was clear from the very beginning that many of the technical solutions implemented in the American prototype were far from perfect,” said Professor Kostyukov.

Which countries have nuclear weapons?

Officially, eight states possess nuclear weapons. The Soviet Union conducted 715 nuclear tests from 1949 to 1990. The U.S. detonated more than a thousand nuclear devices from 1945 to 1992, and is the only country to have used such weapons in war. Apart from the USSR and the U.S., the U.K., France, China, India, Pakistan and North Korea are also recognized members of the nuclear club. Israel is believed to have nuclear weapons, but it refuses to say so officially. In total, more than 2,000 nuclear weapon tests have been conducted in history.

“Soviet scientists could, even at the initial stages of the project, offer better solutions both for the device as a whole, and for its individual components. However, the authorities wanted to get a functioning bomb reliably and at minimum risk.”

Kostyukov believes the decision to implement the American designs, which had already been proven functional, was the only reasonable way to proceed given the tense atmosphere. The general design of the RDS-1 replicated that of Fat Man, but its external shell and electronics were developed independently by Soviet experts.

“The work done by our scientists in the 1940’s was a real masterpiece, considering how primitive their equipment was,” said Vadim Simonenko, deputy scientific director of Russia’s Scientific Research Institute of Applied Physics in the city of Snezhinsk. “This research revealed the path to understanding phenomena occurring at high energy densities, like thermonuclear combustion, novae, and supernovae.”

American officials were confident that Moscow would not be able to make a functioning nuclear weapon earlier than 1954, but the Soviet Union conducted its first successful atomic bomb test in 1949. The events that occurred at the Semipalatinsk test site put an end to the U.S. monopoly on nuclear weapons.

The news about the Soviet atomic bomb shocked the U.S. Government. So, in July 1949 the Americans formulated a nuclear war plan, Trojan, calling for the atomic bombing of 70 Soviet cities.

“Had the Soviet Union not developed an atomic bomb, it would have eventually been destroyed or, at best, subdued by the United States,” believes Alexander Vdovin, professor of Moscow State University’s Faculty of History.

In 1970, the Treaty on the Non-Proliferation of Nuclear Weapons entered into force, with 190 states currently being signatories. In 1996, the United Nations General Assembly adopted the Comprehensive Nuclear-Test-Ban Treaty, which has not entered into force due to non-ratification by some states. Only India, Pakistan and North Korea have conducted nuclear weapon tests since the adoption of the treaty. 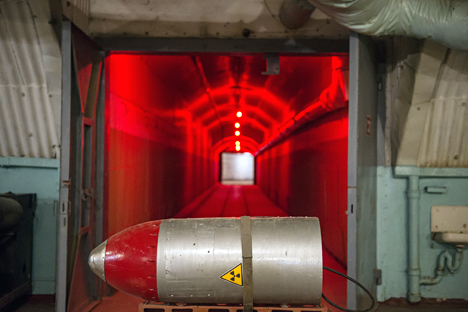 Read more: Russia to safeguard its own nuclear facilities without American help