Will it? Won’t it? Watching the Soyuz rocket launches with Putin 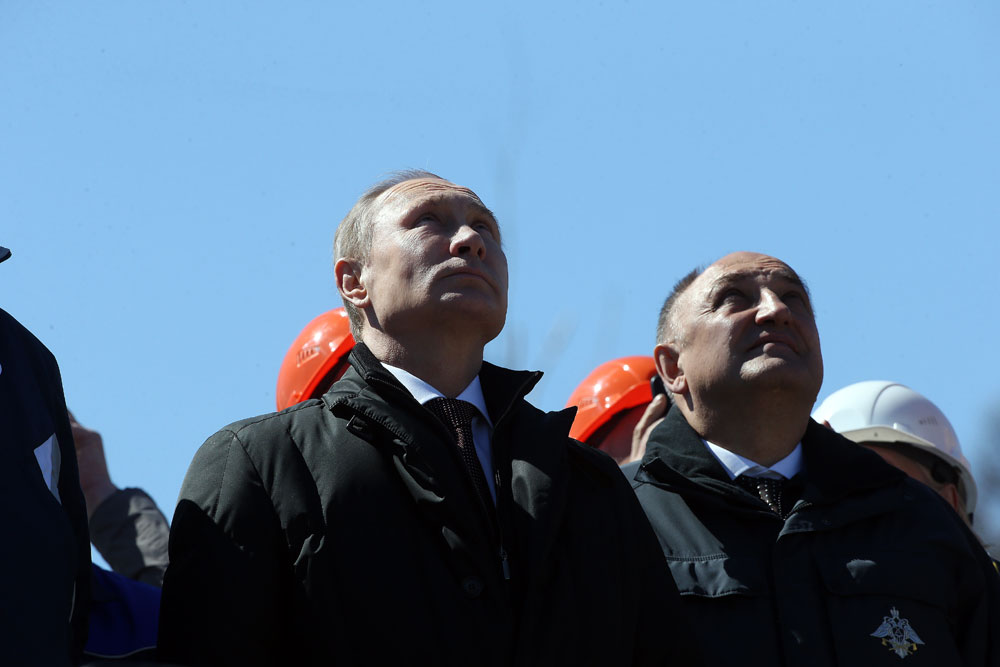 Olesya Kurpyaeva / RG
On April 28, Russian President Vladimir Putin once again came to the Vostochny Cosmodrome to see off the Soyuz space rocket, following a failed launch the day before. Read the ironic reportage by Kommersant's special correspondent Andrei Kolesnikov on the events in the observation room during the launch.

The observation post was about to be entered by Deputy Prime Minister Dmitry Rogozin, the head of the presidential administration, Sergei Ivanov, the head of Roscosmos (the Russian Federal Space Agency), Igor Komarov, and Russian President Vladimir Putin. Again, the same team as the day before.

But the conversations among Roscosmos' employees were different. They were discussing that the previous day's launch had been blocked by the automatic systems, and that this time, the launch would be, of course, successful, simply because the automatics would be shut off, to make sure that nothing happens this time…

Alexander Ivanov, first deputy head of Roscosmos and the head of the State Committee, was here and available, just like the day before. He said that the malfunction of the day before had been immediately found.

"Was it immediately replaced?"

"Everything was replaced, just in case!" said Ivanov.

He was a little brighter today than yesterday. Roscosmos' first deputy head also said that he knew that something had gone wrong the day before by the voice of the announcer. And finally he realized what it was about at the word "air purge."

"And at what word will it be clear that all is well?

Meanwhile, there were people in helmets. They were builders who had probably been brought not only to attract the attention of the president, but also to divert attention away from him, if something went wrong.

The builders walked somehow very sadly, as if they were on their way to their own execution. They understood that should anything go wrong they would be the first to be struck by divine anger, something that – in case of a new failure – no one dared to even think of.

The builders were, meanwhile, arranged in a warm, friendly semicircle. And it was finally joined by Vladimir Putin.

And after a while: "Key to ignition!"

The builders stood motionless, even petrified, although it was so windy that they should have been swayed a little.

"Air purge," exclaimed the speaker in the same voice.

However, there was no uncertainty in this voice. No confidence, too. In general, there was nothing in it. It was the same as yesterday. I did not like this. Incidentally, it is at this stage that we were stuck the day before.

At this point, I broke down and asked Putin:

The question was, of course, dangerous to him. A minute and a half remained before the rocket’s take-off. To give a forecast in this situation was a thankless task.

He thought and added, lest there be any doubt:

"There's no doubt about it."

"There was no doubt yesterday, too!" I remembered.

"By the way, I had doubts yesterday," the president said. "And serious doubts at that."

In reality, there was already less than a minute left. I understood what Putin wanted to show – his absolute confidence, and that he stayed not in vain, and that he accepted the challenge: he makes it clear that, yes, he can say that it will fly just before the start, and no superstitions will stop it. And he had something else to say.

So he said, very quietly:

"You should doubt. But you should believe, too."

And again, it turned out that he did not finish.

"And we should work. That's that…"

"Did you work on it yesterday?

"Lift-off!" the speakers said either icily or mercilessly, or in no tone at all.

‘This is a world record’

The rocket soared. And I already heard:

"Forty seconds! Pitch, yaw, rotation are normal. Sixty seconds, flight is normal... 100 seconds, the parameters are normal ... One fire engine to the launch pad... Copy that, separating the engines!.. 170 seconds..."

That's when the builders rushed to embrace each other.

Now Vladimir Putin was talking with them:

"The equipment went a little too far yesterday, and it was possible to launch it yesterday."

Well, yes, that is, it was possible to disable the automatics yesterday.

Putin moved away from the builders, but before turning his back to them, raised his index finger, looking at me, "I told you it would fly...

There was nothing to argue with.

But Sergei Ivanov was talking about how long they were choosing a place for the spaceport – no less than two years. He was asked how he would celebrate.

"I won't," he answered. "The schedule was severely disrupted, as you might guess. No, straight onto the plane!"

"So you will celebrate on the plane," I assumed with a high degree of certainty.

"No." He gestured, but not very convincingly.

I then asked him whether it was possible to build the spaceport sooner.

"You know," he shrugged, "with such difficulties, with such screw-ups..." He hesitated.

"With stealing, to build it in five years, from a scratch to the first launch... It's not a cottage, it's a world record! Of course, we do not record it, but still ... I was in Kourou (Centre Spatial Guyanais), and the spaceport there took much longer to build. And [Vostochny] has fundamental differences from Baikonur, it is many times more convenient. We just need to build a runway, a hotel, all the services...

"Of course." I supported him. "Foreigners will come!"

A senior employee of Roscosmos, who had heard the conversation, felt it his duty to inform me that the launch had been broadcast on both days to Space Center Houston as part of the strategic partnership with the U.S.