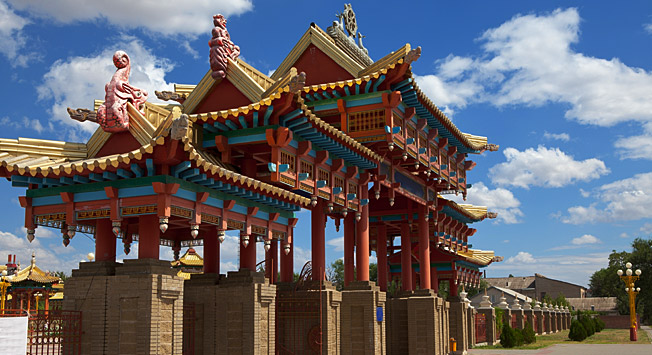 Southern gates of the Golden Temple of Shakyamuni Buddha in Elista, Kalmykia.

Lori/Legion-Media
Russia is home to approximately one million Buddhists.

A new messenger service that seeks to unite 500 million Buddhists all around the world will be launched in Kalmykia, a Russian region with a large Buddhist population, the NSN news agency reported on May 26. Approximately $1 million will be invested in the project. The main investor and creator of the project is the former President of Kalmykia, Kirsan Ilyumzhinov. He has already developed the application for the App Store and Google Play.

“It is similar to other messengers: free, capable of sending video, mail, making phone calls,” Ilyumzhinov said. “Additionally it will disseminate sermons from Buddhist patriarchs.”

Initially, the messenger service was scheduled to be launched in May to coincide with Gautama Buddha’s birthday. It has been postponed until summer, when the 14th Dalai Lama celebrates his 81st birthday, which is on July 6.

The Dalai Lama's opinion was taken into account during the creation of the application, according to Ilyumzhinov. He said that the concept of a Buddhist messenger occurred to him while he was speaking at an international conference in Thailand three years ago.

“When I saw [so many] people sitting in front of me in the lotus position, the idea flashed through my mind,” he said.