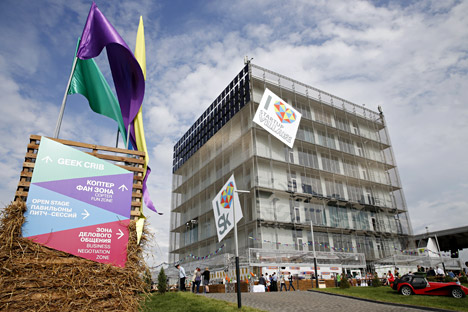 A view of the Hypercube building in Skolkovo.

Russian scientists from Skoltech have put forward a filtering system that generates recommendations sensitive both to positive and negative user feedback, as reported by Skoltech’s press service.

The ACM RecSys 2016 conference, where the study’s results will be presented, will be held in Boston in September.

"With our algorithm, there are generally no restrictions to the amount of positive feedback that can be provided by a user. Instead, a person could specify his negative experience but the system is still able to give his further recommendations. The individual can start with some movie/book/audio track (liked or disliked) and the system will generate compatible suggestions. And of course, the more the user interacts with the system, the more accurate are the recommendations generated by it," says Evgeny Frolov, one of the developers.

Recommender platforms help personalize user experience in content consumption based on individual taste. Nowadays, every internet user has come across such systems, for example, when you visit an online page of your favorite bookstore you are likely to get a personalized reading list based on your previous purchase history and personal preferences.

Netflix, Amazon, Pandora, Spotify and many other companies generate a considerable amount of revenue with recommendations they produce.

Broadly speaking, recommender engines can be applied in many areas for almost any kind of goods or services.

Recommender systems can help an individual decide which movie to watch, which book to read next or which hotel to book for vacation.

According to the developers, the most modern algorithms are almost insensitive to negative feedback and generate suggestions which are not compatible with a particular user, but the new model proposed by Russian scientists can deal with every type of user preference.

The proposed model may find its applications in different areas, such as online shops or media content providers.