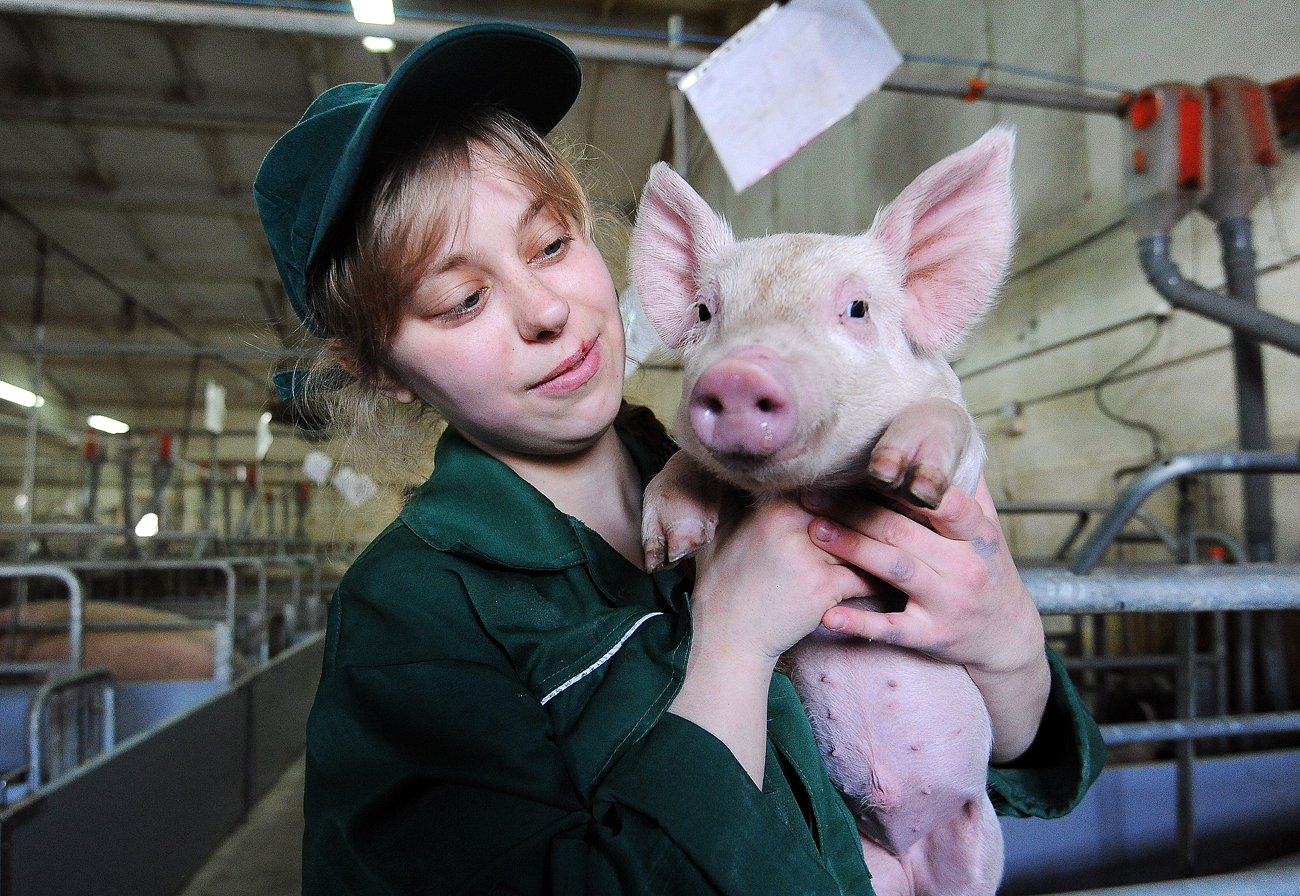 A worker of the Rodnikovsky pig-breeding farm holds a piglet. The farm specializes in raising and processing purebred pigs of meat breeds.

Until recently one of the animal kingdom's most deadly diseases, the African swine fever (ASF), was unstoppable. The only way to slow down spread of the virus was to cull and burn infected animals. Thanks to efforts by virologists from Russia and the U.S., there is a chance to entirely defeat the devastating virus.

“Previously when developing a vaccine traditional methods of neutralizing the virus were used, but when the animal was infected with another form of the virus, it still faced certain death,” said Denis Kolbasov, head of the National Research Institute of Veterinary Virology and Microbiology, which is located in a Moscow suburb.

The ASF virus is the only species in its genus but it can easily mutate, spreading not only among mammals but also among ticks in Africa, where mutations can also occur.

The international research project was launched a year ago and is expected to last a total of three years. It brings together some of the best minds from Russia's National Research Institute of Veterinary Virology and Microbiology, and from the state universities of Illinois, Nebraska and Connecticut in the U.S. To combat the virus, American scientists are working with genetic material and bioinformatics systems, while their Russian colleagues are conducting animal tests.

Researchers already studied the genome of the ASF virus and pinpointed the area responsible for its variability. By manipulating this area scientists were able to create a vaccine by changing the virus' traits and rendering it harmless. According to clinical tests, the new vaccine guarantees full protection against the virus for 60 days.

This breakthrough will help create medicines and vaccines that can be sold. Nevertheless, more work needs to be done. For example, it's not yet clear what effect the vaccine has on pregnant sows, the immunization rate has not yet been determined, and the animals’ condition a year after immunization has yet to be studied.

“In the next phase I hope we will be able to identify those specific sections of the pig gene responsible for defense against this virus,'' said Denis Kolbasov. ``If there is just one section and it is identical for all types of the virus, then it will be possible to develop a universal vaccine. If not, and should a new type of the virus emerge, then it will be possible to promptly respond to the situation and quickly develop new vaccines.”

The project's results were published in July this year in the Journal of General Virology. The research is funded with a grant from the Russian Science Foundation (RSF) (in Russian), which is committing up to 5 million rubles (about $76,000) annually for the project.

ASF virus research is underway in the U.S., UK, Germany, France, South Africa, Spain, and Russia. Russia's first case of ASF was recorded in Dec. 2007. Since then, the virus has not undergone considerable mutation in that country.The ASF virus is not a threat to humans but it causes considerable losses for pig farmers. Overall, Russia has had over 500 outbreaks of the disease, resulting in losses of 30 billion rubles (over $460 million), with about one million pigs culled.