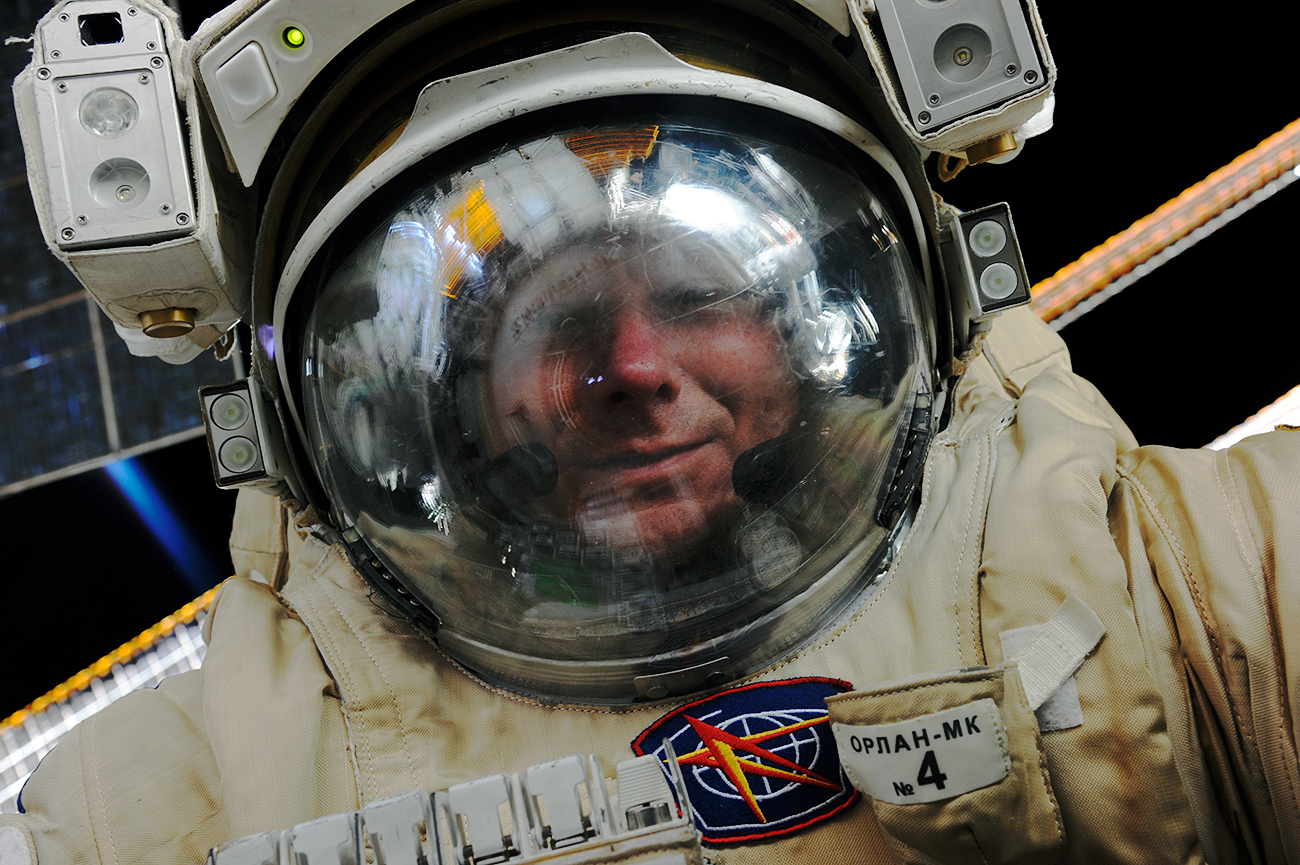 "Many astronauts believe Russia's official ban on alcohol in space is harmful." Photo: Cosmonauts Gennady Padalka during his tenth spacewalk.

Roscosmos
Life as a cosmonaut is not as romantic as it seems. Anyone who has been in orbit will tell you that it’s very difficult work, leaves you with little free time, and is enormously stressful for your body. Russians, however, cannot live without a celebration and friendly get-togethers over a bottle of spirits, even in outer space.

The first alcoholic drink went to space in 1971, destined for the Salyut-7 orbital station. One of the cosmonaut's birthday occurred while he was in orbit, and friends gave a present before launch: they hid a bottle of Armenian cognac in the wristband used for measuring blood pressure.

Later, inspectors found dozens of caches in various stations where alcohol had been hidden. Officials don’t deny this. Vyacheslav Rogozhnikov, co-chairman of the chief cosmonaut selection committee, admits that almost all cosmonauts have such stashes. "This is categorically forbidden, but alcohol still appears. I don’t know where it comes from."

Pickles on the stomach

Most likely, Rogozhnikov is not entirely forthcoming. A sneaky plan to take ‘necessities’ on board a spaceship was described by the Hero of the Soviet Union, cosmonaut Igor Volk. In 1984, before the launch of the Soyuz, he brought with him two jars of pickled cucumbers and a bottle of cognac.

"It’s impossible to take aboard more weight than the alignment of the seat can handle," Volk explained. "My partner Volodya Djanibekov and I thought of everything. A week before the launch we didn't eat anything except bread and tea, and we lost almost two kilograms (4.4 pounds). We packed everything in little cellophane bags and when we were being dressed, we placed the bags in the spacesuits. That's how I took off with pickles on my stomach." 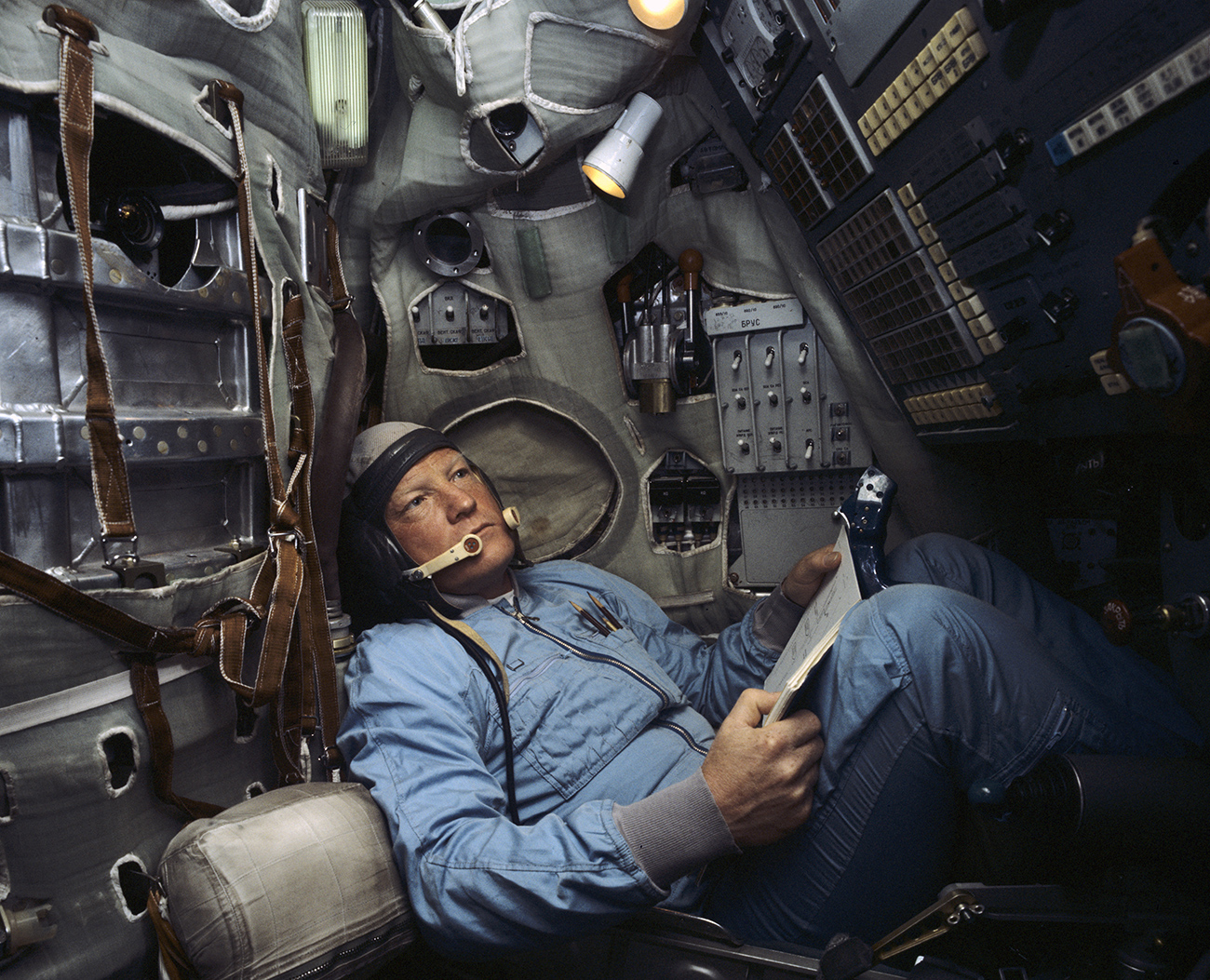 Alcohol was sometimes taken on board in printed material. "It was a thick book, and you’d remove the cover and instead of the pages you put in a bottle; about a liter and a half could fit. The most important thing is that it doesn't gurgle."

Cosmonaut Georgy Grechko, who recently passed away and spent 134 days, 20 hours, 32 minutes and 58 seconds in space, talked about a different, more complex scheme. In orbit, in order not to have muscular atrophy, exercises are required for at least two hours a day. For this purpose, the spaceship has special suits with mechanisms inside that force the muscles to work in zero gravity. Cosmonauts, who replaced each other in the station, left the stashes in these suits.

"Once in a new physical education suit we found a half-liter flask with the label Eleutherococcus B (a natural tonic)," Grechko remembered. "When we opened it, we saw cognac! We calculated that each day before bed we could each drink 8.5 grams, but we managed to drink only half of the flask. We just weren't able to drink the rest. Liquid has the same zero weight as air, which is why it doesn't spill out. And if it’s squeezed out, it just mixes with the air into froth. That’s why we had to leave half of the flask where we found it.

"We were amazed when the next cosmonauts returned to Earth and told us they had finished the cognac! How? They had devised a method – one cosmonaut floated to the ceiling and grasped the flask with his teeth and the second hit him on the head. The first descended and the liquid by nature of inertia spilled into his mouth. Then they changed places." 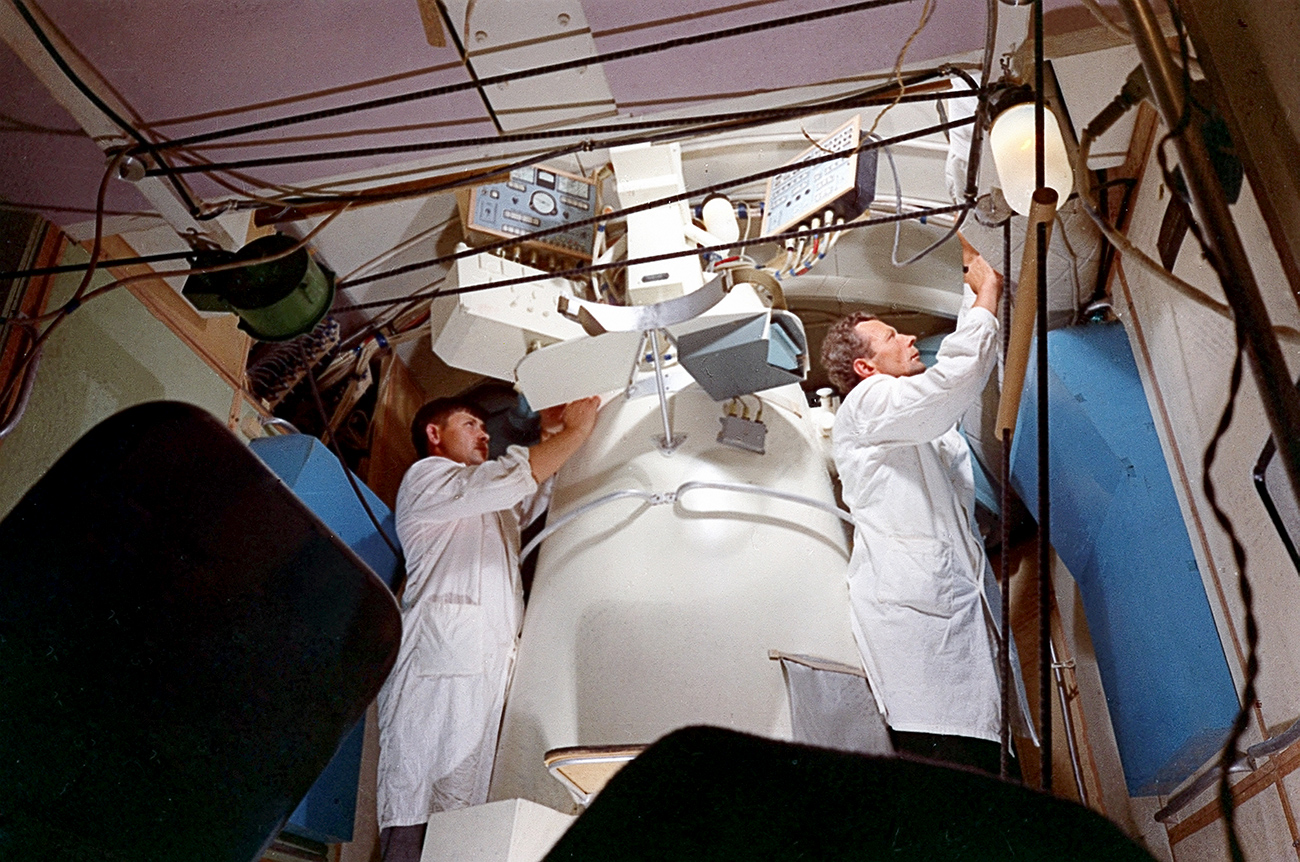 "The most difficult thing was to take the bags to space, bypassing the various checks." Men at work assemblying the orbital station Salyut (launched on April 19, 1971).

Many astronauts believe Russia's official ban on alcohol in space is harmful. Alexander Lazutkin, who spent 184 days in orbit, talks about this openly. "Once, because of an anomaly in the station, the air composition in the compartments changed. Even the doctors at the Mission Control Center recommended a bit of alcohol in order to neutralize the harmful factors."

Two-time Hero of the Soviet Union, Valery Ryimin, agrees with Lazutkin. "All people who fly will tell you a sip of cognac in space relieves tension and has a positive effect on the body. Once, before launch, I bought 12 bottles of Armenian cognac, which I poured into soft plastic bags with screw stoppers.

"The most difficult thing was to take the bags to space, bypassing the various checks. Six liters were placed in certain caches; that’s not a lot if you consider that the flight was to take a year and a half, and in this period there’d be another two missions that would bring six more cosmonauts to the station. Obviously, the cordial hosts met the guests with a feast. The small sip of cognac was called bul'ka. On Earth this is 20 grams, which is nothing. 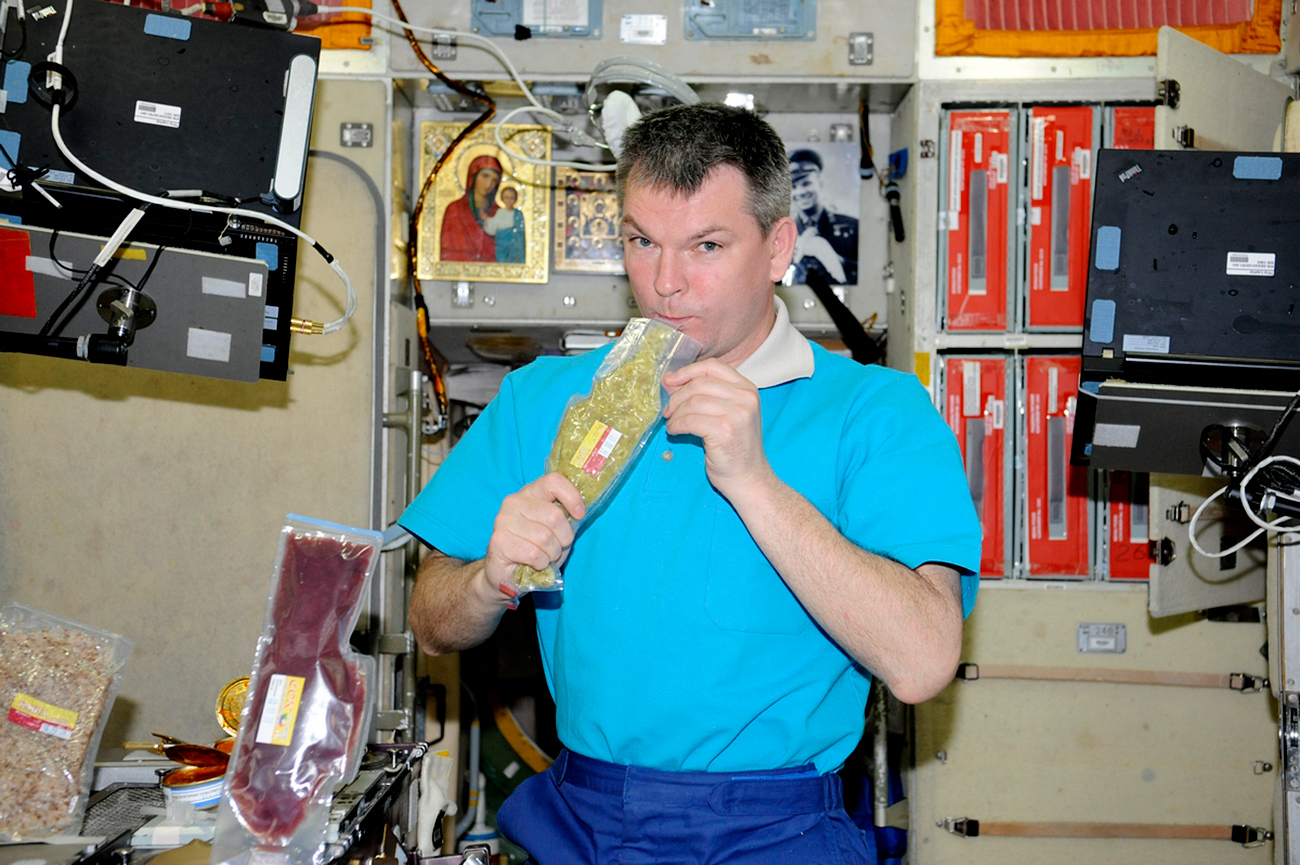 "The tiny drop of alcohol has a fantastic effect in space: it calms you down, removes the tension." Photo: On board of the International Space Station.

"In space, bul'ka is a magical elixir. For example, we had a hard day and the following day was a difficult experiment," continued Ryimin. "We get into our sleeping bags but we’re not sleepy at all. The bul'ka saves you. You don't down it all at once. You hold the bul'ka in your mouth, on your tongue and then slowly swallow it. You stretch out the process for 10 minutes.

"The tiny drop of alcohol has a fantastic effect in space: it calms you down, removes the tension. You quickly fall asleep and in the morning you get up invigorated. This is better than a sedative, which you get addicted to quickly. The common opinion is that Armenian cognac is the best alcoholic beverage in space. I am convinced that it’s necessary to legalize alcohol in space in small quantities, for example, as a sedative."

Strange as it seems, the most difficult thing for cosmonauts who like to relieve stress is returning home. Almost all say it’s very difficult to get rid of the habit of "standing" objects in the air.

"This happened to me," said Pavel Vinogradov, who flew to space seven times. "The first time I returned from space I asked my wife for a glass of water. I drank it and just let the glass go, without thinking what I was doing." 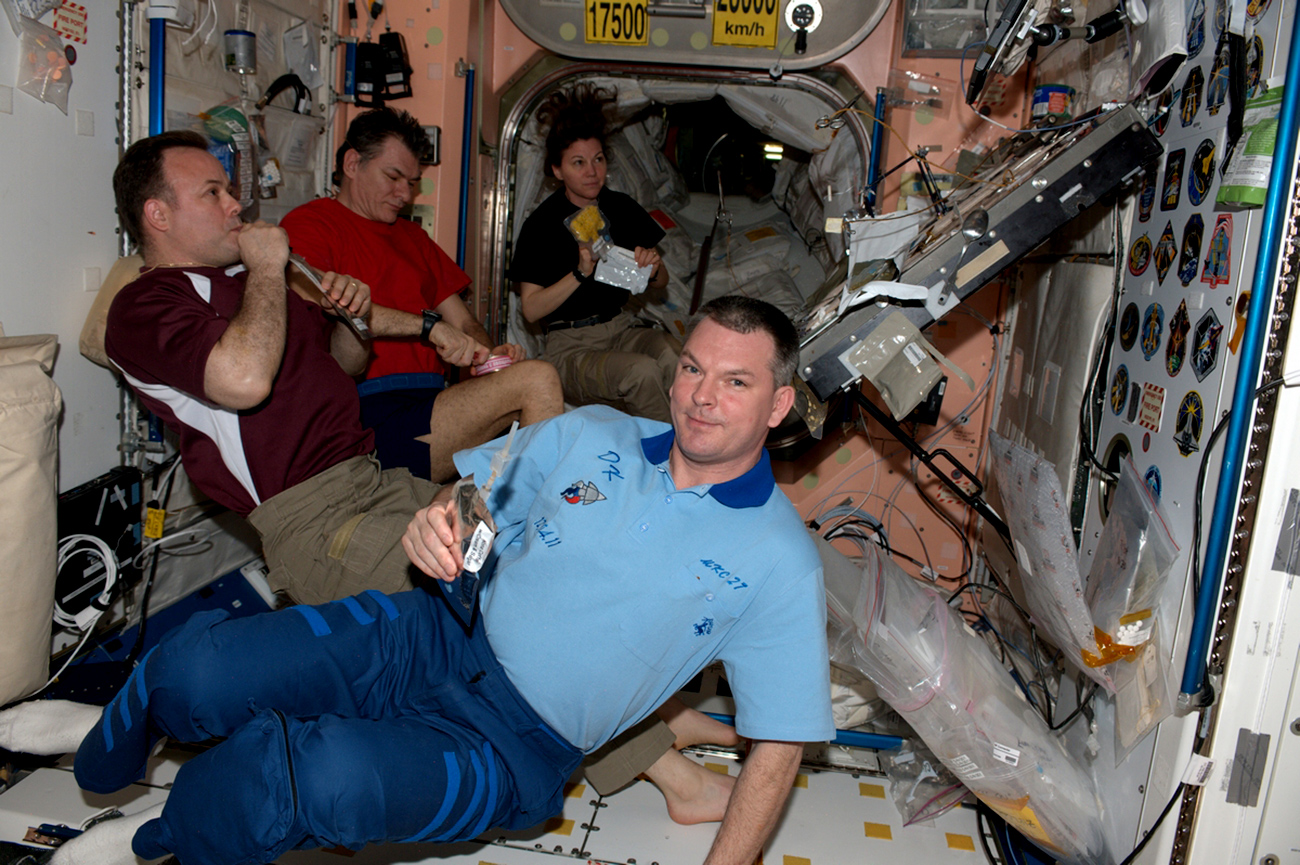 "All people who fly will tell you a sip of cognac in space relieves tension and has a positive effect on the body." Photo: On board of the International Space Station.