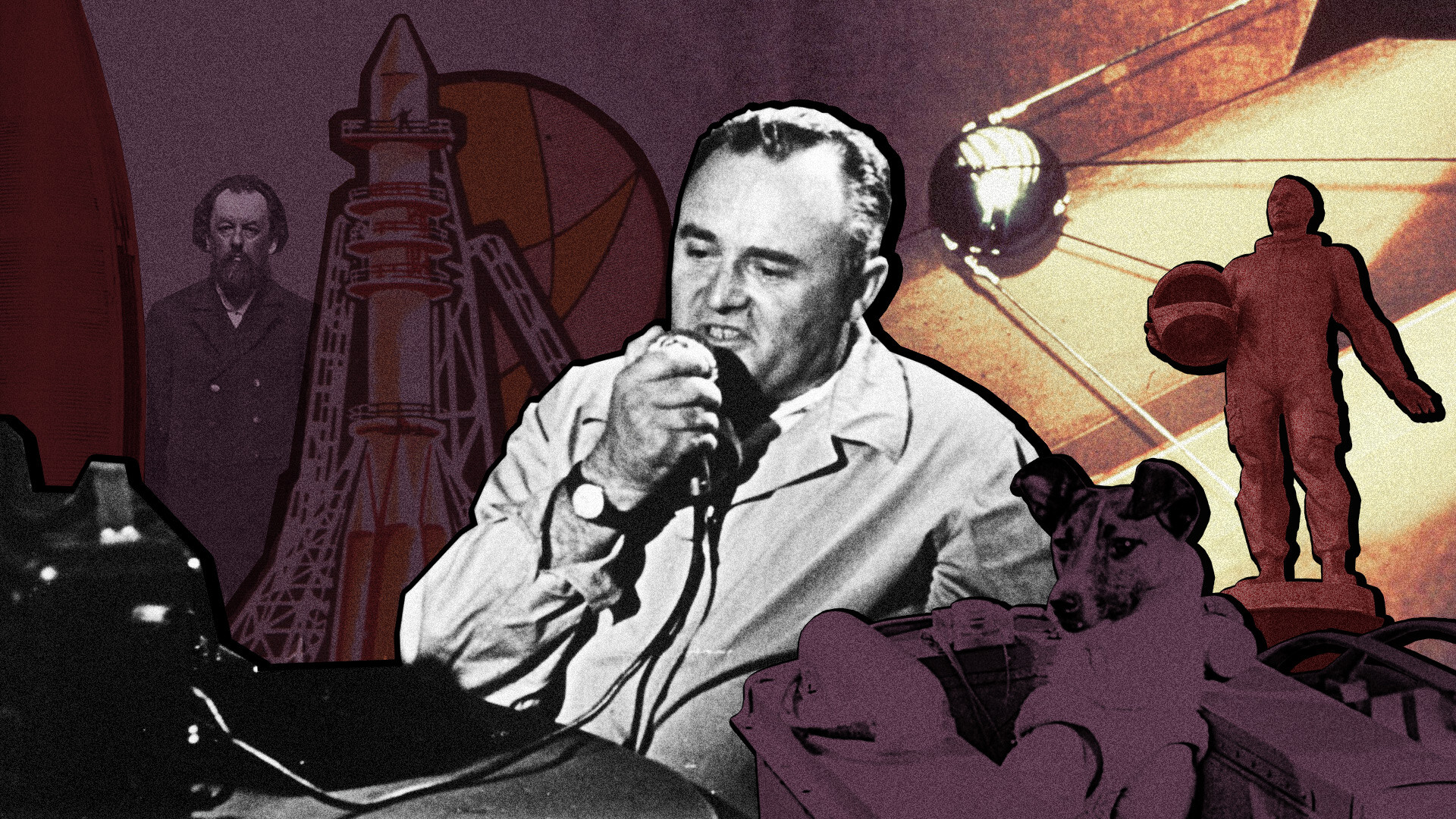 Kira Lisitskaya (Photo: NASA, Sputnik)
World cosmonautics are still developing Korolev's ideas and without him the USSR’s space triumphs would not have happened.

Korolev can easily be called a wunderkind because he realized his first successful developments while still in school. At the age of 17 he presented his engineless airplane. At university (in 1926 Korolev transferred from the Kiev Polytechnic Institute to the famous Bauman Moscow State Technical University) he designed the first glider in the USSR, which was supposed to be used for performing intricate aerobatics, including the dead loop. Soviet flying ace Vasily Stepanchonok eventually carried out the flight successfully. Korolev, who was a certified pilot, was unable to execute the flight due to an illness.

After his first meeting with the pioneer of astronautic theory Konstantin Tsiolkovsky at his home in Kaluga, Korolev's interest shifted to reactive movement. In the 1930s, together with his associates Korolev founded the Group for Studying Reactive Movement (GSRM), which then evolved into the Reactive Scientific-Research Institute. 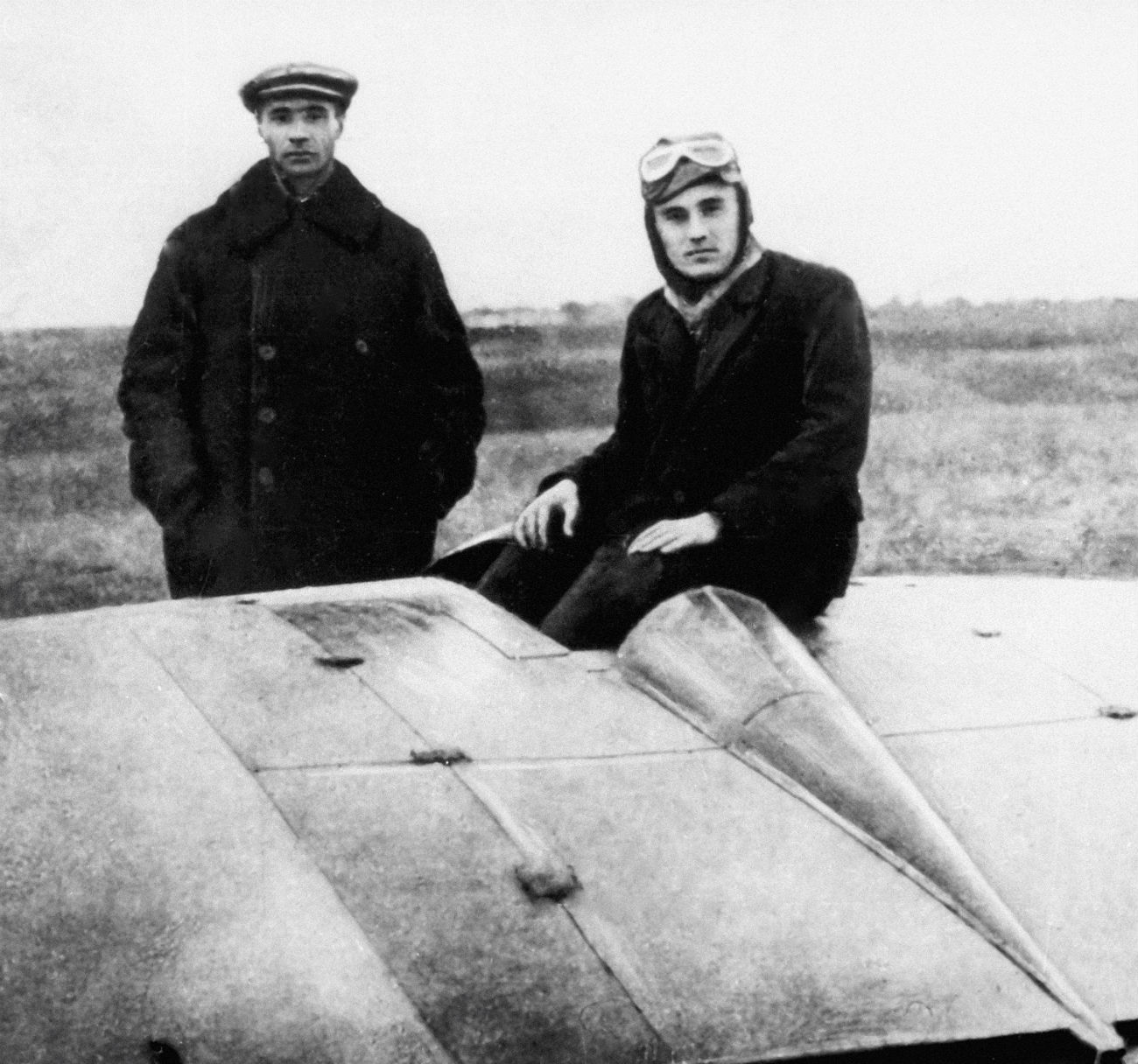 3. Bombers in a prison design bureau

Sentenced to 10 years in labor camps, Korolev was sent to Kolyma and Vladivostok, but in the summer of 1940 was retried and after the second verdict (an eight-year sentence) was sent to the special NKVD Central Design Bureau-29 (CDB-29) in Moscow. It was headed by four constructors, who were also prisoners, including Andrei Tupolev, the famous aviation constructor and Korolev's former supervisor at the Bauman University. It was in the CDB-29 that the best Soviet bomber (from the viewpoint of technical characteristics), the Tu-2, and the most mass-produced bomber, the Pe-2 dive-bomber, were created. In 1942 Korolev was transferred to Kazan, where he continued working on rocket engines.

Two years later, by order of Joseph Stalin's decree, Korolev was released without completing his sentence and his charges were dropped. In 1946 he was appointed chief constructor of the Special Design Bureau-1 (SDB-1) in a small Moscow suburb called Kaliningrad (now it’s called Korolev). The bureau's main objective was to create an equivalent of the German V-2 and since all the blueprints had been lost, the calculations had to be done from scratch.

In 1948 the first test flights of the R-1 took place. However, Korolev was simultaneously involved in the development of several generations of missiles. In 1954 Korolev's construction bureau produced the R-5, the first ballistic missile with a nuclear charge, and two years later it constructed the R-7, the first intercontinental two-stage ballistic missile, which was capable of delivering a nuclear warhead to practically any point on the planet. It was this missile that presented the opportunity to conquer space and became the basis for all of today's rocket carriers. 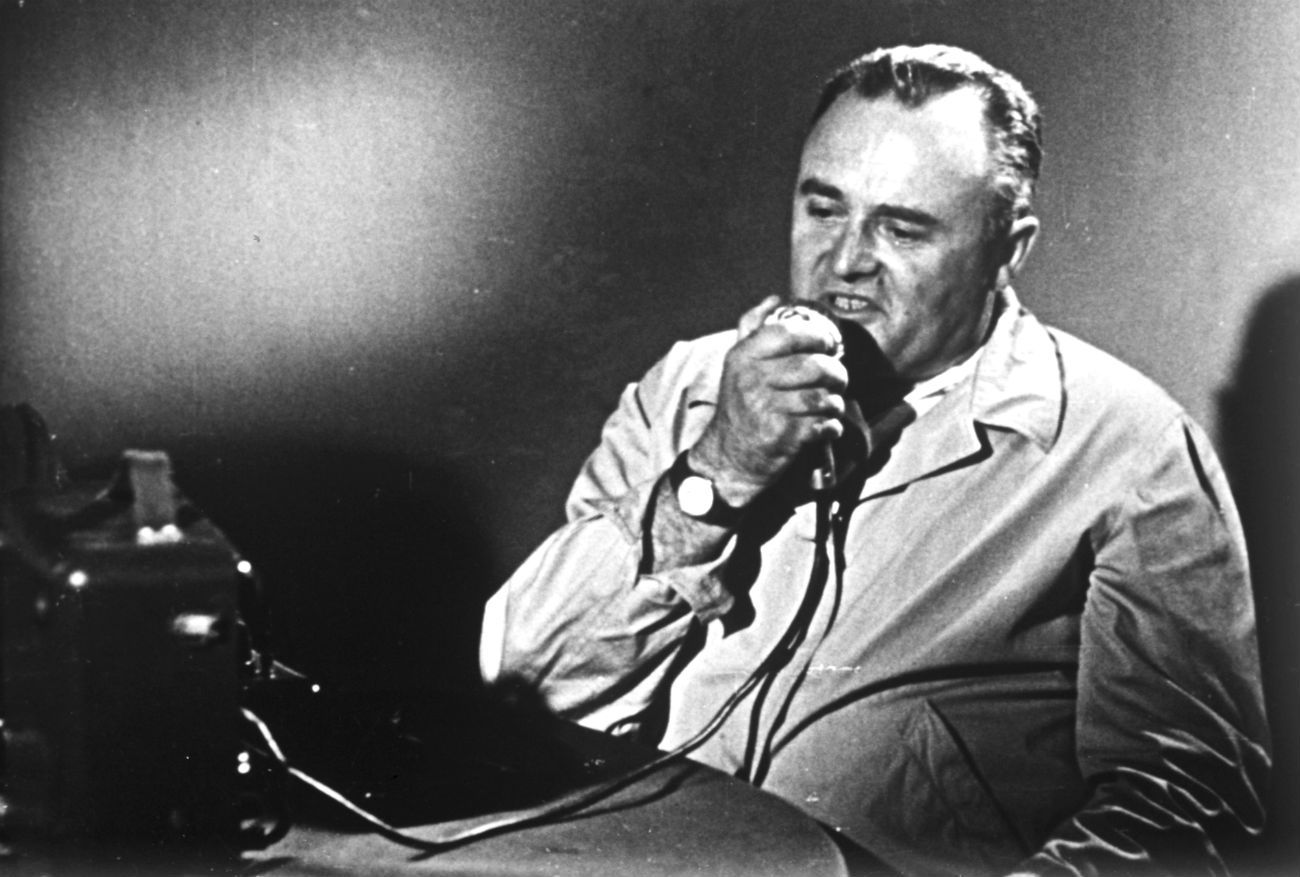 Before the R-7 flight tests, a group of constructors from Korolev's design bureau proposed sending an artificial Earth satellite to space and the authorities accepted the proposal. Based on the combat missile Korolev developed the system of three and four-stage carriers. On Oct. 4, 1957 the first artificial Earth satellite called Sputnik-1 (in Russian “sputnik” means satellite) was launched into orbit. Two years later the automatic Luna-2 station became the first manmade object to conduct a space flight, waving the Soviet banner above the Earth. 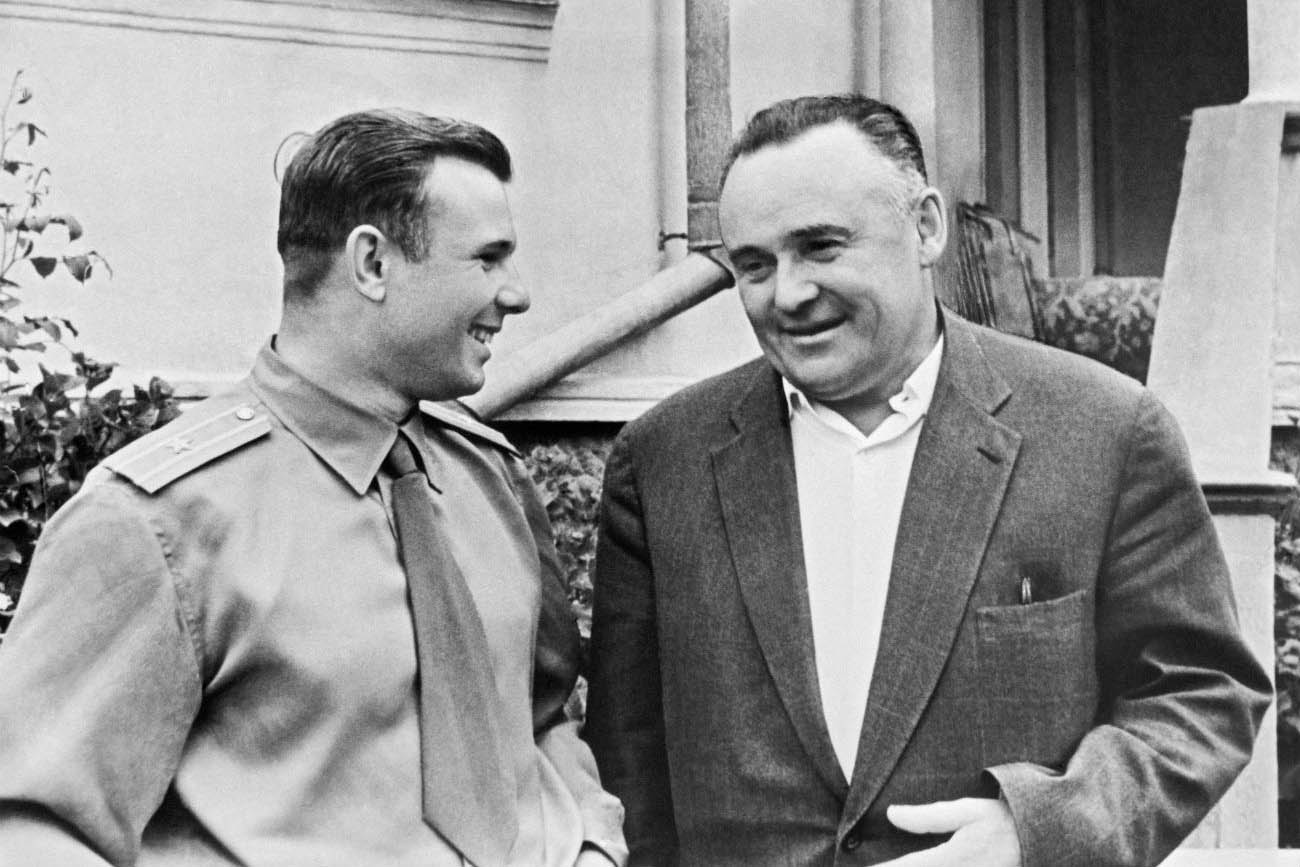 Korolev's energy was inexhaustible and in the first half of the 1960s under his supervision the USSR made many breakthroughs in space. On April 12, 1961 Yuri Gagarin became the first person in space, in 1962 a joint flight of the Vostok-3 and Vostok-4 spaceships took place and in 1963 Valentina Tereshkova became the first woman in space (afterwards, only three other women would fly to space in the USSR and Russia). In 1964 the USSR launched a new spaceship, the Voskhod, and for the first time there was a multi-member crew, made up of three people. Finally, on March 18, 1965 Alexei Leonov became the first cosmonaut to conduct a spacewalk. 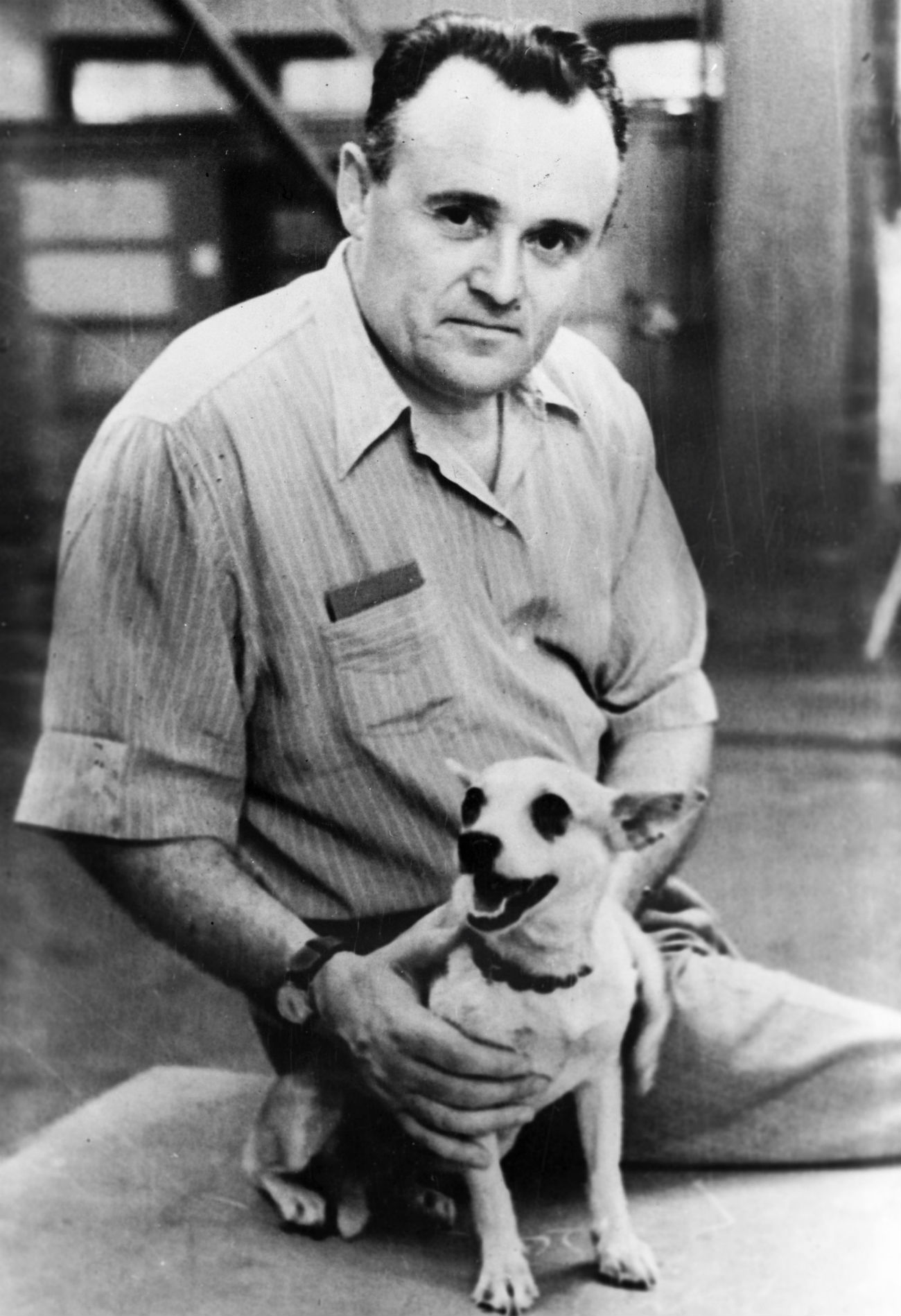 Sergei Korolev with dog before putting it in orbit,1960. Source: RIA Novosti

7. Orbital station projects and landing on the moon

Perhaps, had circumstances been different, Alexei Leonov would have been the first Soviet cosmonaut to land on the moon (such was his role in the piloted moon program). However, without single leadership the development went slowly. In 1966 Korolev died from an illness and several years later Brezhnev canceled the program. Another of Korolev’s idea, which occupied him in his last years, was to build an orbital station where cosmonauts would live and work for a long time without spacesuits. A step in this direction became the creation of the Soyuz spaceship, which included a living compartment. Unfortunately, Korolev did not live to see the spaceship's first launch in 1967.

QUIZ: 10 simple space flight questions that are difficult to answer