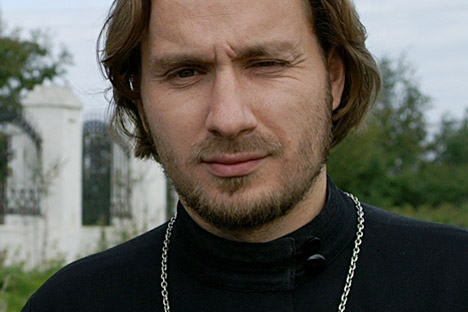 The Rev. Dimitri Sverdlov was banned from performing church services for five years. Previously, he wanted to apologize to the Pussy Riot members for the "furious hatred" displayed by "sections of the Orthodox community." Source: Golos-obitely.prihod

The Rev. Dimitri Sverdlov, who had previously called for atonement for the “furious hatred” directed at Pussy Riot, is barred from serving for the next five years.

The Rev. Dimitri Sverdlov, a priest from Moscow Region who became famous after offering to apologize to punk band Pussy Riot for the aggressive behavior of the Orthodox faithful, has been banned from performing church services for five years. A decree to that effect was published on the website of the Moscow Diocese.

"My career in the Russian Orthodox Church (ROC) ended yesterday. A friend phoned me today to say that the Moscow Diocese had posted a decree banning me from serving for five years. No condolences, please. I'll post more details later," wrote Sverdlov on his Facebook page.

Sverdlov, a priest of the Church of the Holy Apostles Peter and Paul in the village of Pavlovsk (Moscow Region), stated back in March 2012 that he would like to apologize to the arrested members of Pussy Riot for the "furious hatred" displayed by "sections of the Orthodox community," following the punk band’s protest in Christ the Savior Cathedral. His remarks caused an uproar.

Dimitri Sverdlov's lifestyle is unlike that of other members of the ROC: he blogs and writes, often voicing criticism of the Church. During the last State Duma elections, he worked as an observer, noting violations at his local polling station.

In September 2012, the diocese relieved him of his duties as rector of St. Peter and Paul Church and sent him to work "on the staff" of the Cathedral of All Saints in Domodedovo. Sverdlov did not serve in his new position, however.

"For the voluntary neglect of his parish, Father Dimitri Sverdlov is banned from administering mass for five years and declared supernumerary," read the decree, which was signed by Metropolitan Juvenal Krutitsky and Kolomensky and published on the website of the Moscow Diocese.

As explained by the press secretary of the Moscow Diocese, the Rt. Rev. Nikolai Balashikhinsky (Pogrebnyak), Sverdlov was punished for having gone on vacation without informing the hierarchy, which was a breach of common protocol.

Pogrebnyak, a bishop, considers the five-year ban to be a sufficiently "soft" punishment, as Sverdlov has not been permanently relieved of his duties; the priest is only banned for a certain period, after which he will be able to return.

"If he conducts himself with decorum, then in five years he will be able to submit a petition to return and resume his duties," said Pogrebnyak.

On the question of whether Sverdlov's punishment was related to his public statements about the ROC, Pogrebnyak's answer was negative, but he noted that this was his personal opinion.

"When a person opens his mouth without thinking, he will inevitably commit blunders. If a person, for example, jaywalks without even looking, sooner or later something is bound to happen to him," said Pogrebnyak.

Senior Archdeacon Andrei Kuraev commented on the decision of the Moscow Diocese: "When I compare the restrictions placed by the ecclesiastical authorities on other priests, I am perplexed by the length of the ban. I understand that his willful departure from the parish was a factor in the decision, because that is a canonical violation. But to be banned from serving for five years and expelled from the diocese? I can only cite the case, two years ago, of a group of Abkhazian monastic priests who announced that they were subordinate to no one and did not recognize the authority of any of the patriarchs, for which they received a one-year ban from administering their duties."

The article is based on materials from RIA Novosti abd NEWSru.com.