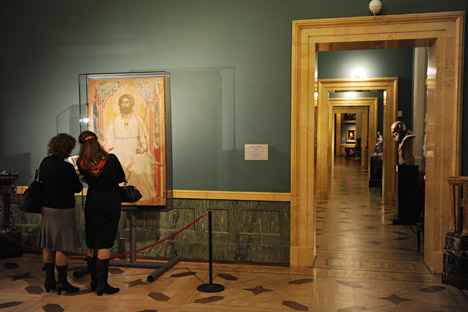 The historical role of museums has always been to preserve the cultural heritage — part of which is the ecclesiastical heritage, according to Mikhail Piotrovsky. Source: Sergey Ermokhin / RIA Novosti.

Should museums return religious valuables to the Church? Director of the State Hermitage Museum Mikhail Piotrovsky recently discussed this issue with the Rt. Rev. Nazary of Vyborg, Superior of the famous St. Alexander Nevsky Monastery.

Director of St. Petersburg's State Hermitage Museum Mikhail Piotrovsky recently sat down with the Rt. Rev. Nazary of Vyborg, Superior of the famous St. Alexander Nevsky Monastery to discuss one of the most important issues in relations between the Church and the art community: church valuables now kept in museums and whether or not they should be given back to churches.

Rossiyskaya Gazeta: What is your attitude with respect to the question of returning museum valuables to the Church?

Rt. Rev. Nazary: What was taken away from the Church should be returned; but to simply suddenly take these things back is as impossible as it would be to suddenly leave them. We understand that we can and must look for compromises. To begin with, I think we should be able to find and accept a “zero option.” 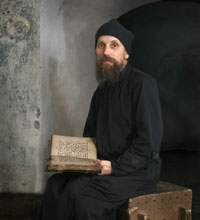 In pictures: A mix of Russian Orthodoxy and modern photography

Mikhail Piotrovsky: As far as the relics are concerned, I absolutely agree. We prepared a list of relics — the Hermitage has some 50 fragments of relics — for possible return to the Church. Everything had been agreed upon, but, when it came time to transfer the relics in the Kremlin, it turned out that, in addition to the relics, we were also supposed to return the vessels in which they were kept — vessels which are of artistic value.

And so, in Moscow everything came to a standstill. But all the preparations have been made so as to do this. We, incidentally, have returned some Armenian Church relics.

RG: The Church wants to get back what was taken from it, but museums are resisting. Why?

M.P.: The historical role of museums has always been to preserve the cultural heritage — part of which is the ecclesiastical heritage — and to pass it down in a somewhat different context. It is true that during the revolution the cultural values of opponents were trampled, but one of the functions of museums is to take things out of the previous context, call them art and, already independently, preserve them.

Nazary: Hung in a museum like a painting, an icon doesn’t lose its sacred content; but this doesn’t depend on the museum.

After the Revolution of 1917 the Soviet authorities requisitioned church plate, icons, frames and much else. Some of these valuable objects were destroyed (melted down), while others were sold abroad. Still others were saved in museums. Since the fall of the Soviet Union, the Russian Orthodox Church has insisted on the restitution of its valuables, including real estate and religious objects.

M.P.: However, museums are visited by people who do not go to church. Therefore it is very important that they see in museums our religious art.

Nazary: Anyone can walk into a museum or a church. We don’t ask people at the door: “Are you a believer or not?”

RG: Do you have examples of decisions that suited both sides?

Nazary: We have precedents of collaboration. For the millennium of the Baptism of Rus, museums gave our monastery 15 objects on loan. Every year, we report on them and confirm our responsibility for them. In our life, the public looks only for examples of dull-wittedness. No, if there is a basis and serious arguments, the Church will make compromises and not just “grab,” as angry bloggers claim: “The Church wants a ton and a half of silver.” But silver is important only because what is so very holy should not be in plastic.

We do not need the state to bring us a ton and a half of silver in bars.

RG: Can the Church calmly accept objects returned to it by museums and guarantee their safety?

Nazary: We often hear the accusation: “The Church will not be able to preserve museum valuables.” There is some truth in this. It’s not any church or monastery that is qualified to preserve a cultural masterpiece. But I can say with complete accountability: our lavra is qualified. We have a studio for restoration and experienced specialists, and the possibility of showing objects of great cultural value in exhibitions in our museum.

But I will not deny that there are churches in which a cultural masterpiece could be lost. When I sometimes visit the ancient churches in the Yaroslavl region and see beautiful icons being carefully wiped, even though their top layer of paint is ready to come off as it is, I feel as if I might have a heart attack.

The gallery: The unique collection of Russian religious painting

Nazary: Of course! We don’t want amateurs; we seek only licensed specialists to do our restoration work, although they charge much more. Mikhail Borisovich, will you be surprised if I tell you that some of our workers are from the Hermitage?

M.P.: And why not, if it’s after their main workday?

Nazary: In addition to expositions, monasteries and churches need special storage vaults built according to all the rules, with temperature control and so on. In this connection, I had a “seditious” but important thought.

If the Church and museums were to arrive at a genuine understanding, then our icons — cultural masterpieces — could be kept in their storage vaults, on the condition that they remained ours, and, when necessary, we could take them for services or for exhibitions in our church museum. We would draw up an agreement on handing them over for safekeeping, and, by way of payment, we could give the museum the right to show them.

M.P.: That’s right. Dynamic scenarios like that should work in the 21st century. At the same time, we need a system of guarantees, electronic surveillance and so forth. I think that museum objects could be with the Church temporarily, and church objects temporarily in a museum, where they could be the subjects of scientific investigations.

The full version of the article is available in Russian here.