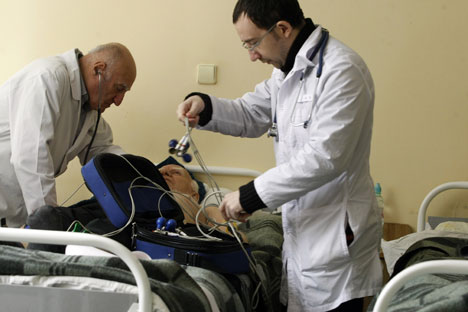 Humans may someday learn to live without a physical body, keeping their consciousness alive in a lab and communicating with machines by speaking a universal information language. Source: ITAR-TASS

Dr. Roman Deyev speaks about the paradigm of preventive medicine, turning people into cyborgs, and what kind of medicine awaits us in the far future.

Discussions of the future of medicine are both intriguing and provocative. The outlook for the development of medicine depends on the evolution of our perception of the world around us (from the planetary to the nano-level), as well as the emergence of researchers capable of breaking away from the rigid framework of accumulated knowledge and making an “asymmetric” proposal (thus making a qualitative breakthrough).

Robotic surgical systems are pushing surgeons away from the operating theatre and into gaming rooms.

Dr. Anthony Atala’s first successful lab-engineered bladder was followed by Paolo Macchiarini’s advances in regenerative medicine: tissue-engineered organs became a reality. The only thing left is to refine cultivation and bioprinting technologies for tissues and organs.

Gloomy predictions about human cloning and “growing” homunculi for organs never came true. The technology of humanized organs is much more promising.

During the first decade of the 21st century, we all had high and somewhat romantic hopes about cell technology (regenerative medicine): conclusions were hastily made that they were the future of medicine and that they held great promise. We hoped that cells extracted from a body and prepared in a lab would someday be effective in fighting the things doctors cannot defeat today, including the fatal outcomes of heart attacks, malignant growths and genetic diseases.

A few years later, it became clear that, despite the wealth of experience accumulated by researchers, no real progress in cell technologies had been made; we were pretty much where we had been in the second half of the 20th century.

Whether or not there will be any breakthroughs is a major historical question. And it may call for a dramatic shift in the research paradigm: we should be looking to predict the development of any given pathology, to employ preventative measures rather than simply developing new means to “repair” the body.

However, for preventive medicine as a culture of the consumption and provision of medical services to work, researchers and developers, as well as healthcare executives, will have to go deeper than the cell level — that is, they will have to go into the molecular and genetic levels.

As a Nobel Prize winner and the discoverer of two strands of DNA, James D. Watson once said: “We used to think that our fate was in the stars. Now we know, in large part, that our fate is in our genes.” The phrase immediately caught on.

In order to “repair” genetic disorders rather than acquired illnesses, new technologies are required.

One of the most ambitious approaches is the creation of an artificial chromosome in a lab.

It appears that you can take a regular chromosome, remove all of the unwanted sections, leave only those responsible for its doubling before cell division, and integrate a “fault free” gene between them. Or, as the Russian researcher Vladimir Larionov has shown, you can assemble an operational, artificial chromosome by picking synthesized DNA sections (including the required therapeutic gene or an enormous lump of another chromosome) – the same way you pick beads for a necklace. When assembling the chromosome, you can add regulating sections to manage the process of removing the chromosome from the cell when necessary.

As soon as this artificial chromosome is placed into a cell of a sick body, it helps generate missing proteins; the body, with its genome reinforced this way, gradually gets better.

Aleksei Tomilin, associate member of the Russian Academy of Sciences and head of the Laboratory of the Molecular Biology of Stem Cells at the Institute of Cytology says this: “Artificial chromosomes can be of major importance for the treatment of many diseases, including hereditary diseases. The main advantage of artificial chromosomes over other vector systems is that they don’t modify the host’s genome in any way and can be extracted from cells. Stem cells are the most convenient way to transfer artificial chromosomes into a patient’s body.”

A leap in time

It is abundantly clear that medical science has developed in leaps and bounds. By the beginning of the 21st century, we had eradicated a number of serious infectious diseases, improved the general quality of people’s lives and increased the average life expectancy by several decades.

However, as we accumulate knowledge, it becomes clear that the next quality breakthrough is only possible if the ideology of medical science and the healthcare system change dramatically, so that diseases can be anticipated and prevented.

The possibilities facing humankind are limited only by our imagination, and they instill hope in the terminally ill.

Some of these possibilities look like they have been borrowed from science fiction. The Russian neurobiologist Dmitry Kuzmin, who currently works at University College London, delivered a lecture last year entitled “People and Medicine of the Future.” In the lecture, he dwelled on the possibility of turning humans into cyborgs, which could extend the human lifespan to 120 years.

The first steps have already been taken: the development of Alzheimer’s disease and Parkinson’s disease can be slowed or even stopped with the help of a brain implant.

Humans may someday learn to live without a physical body, keeping their consciousness alive in a lab and communicating with machines by speaking a universal information language. The diseases affecting cells and tissues – the things that age our bodies – will become a thing of the past. But this is just one of the options for the medicine of the future.

Roman Deyev holds a doctorate in medicine and serves as the research director at the Institute of Human Stem Cells.