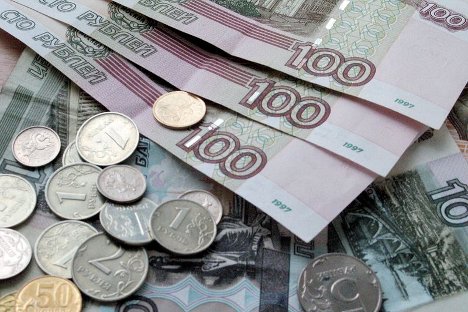 Russians have been borrowing more money than they can pay back. Source: Rossiyskaya Gazeta

Consumer lending continues to be a lucrative business for banks in Russia, which price in the risks of late payments and defaults.

Russians have been shopping hand over fist in recent years, and borrowing more money than they can pay back to do it.

Last year, overdue consumer loans surged, but analysts say that as long as world oil prices don’t plunge, a slew of emerging safeguards is likely to keep the credit bubble from bursting.

According to data from the Bank of Russia’s Financial Stability Review for 2012, the overall volume of consumer loans with overdue payments of 91 days or more grew year on year by 12 percent in the third quarter of 2012, the highest growth rate in the past two years.

But consumer lending continues to be a lucrative business for banks in Russia, which price in the risks of late payments and defaults, and they have been pursuing potential clients with fervour, plastering shopping malls and subway stations with ads for seemingly easy credit.

As a result, the sector has been boosting the volume of personal loans, sometimes at the expense of lending to the real sector of the economy.

Russian banks expanded loans to individuals by 39 percent in 2012 compared with 12.7 percent growth in loans to businesses (not counting financial firms), and earned a record profit of over 1 trillion roubles ($33 billion), Central Bank First Deputy Chairman Alexei Simanovsky said January 17 on the sidelines of an economic forum in Moscow.

According to the National Credit History Bureau, consumer credit remains the most popular type of retail lending by the number of loans issued, accounting for just under 70 percent of the domestic retail loan market.

At the same time, as of November 1, 2012, overdue household debt, made up mostly of consumer loans, equalled about 4.4 percent of the total, with loans to individuals at 7.39 trillion roubles ($238 billion) and overdue loans at 325 billion roubles ($10.5 billion), according to data from the Central Bank of Russia.

The IMF warned Russia in mid-2012 that it faced the risk of a credit bubble due to the rapid growth in consumer credit over the past decade and that the national economy could very easily overheat.

Local financial analysts have noted the risk as well. If banks aren’t careful, they may find themselves in dire straits – short of liquidity or, worse, find their capital falling below required minimum levels.

“If the volume of loans extended to individuals grows further, the latent cumulative credit risk will begin to manifest itself, largely for the portfolio of point-of-sale lending, which has been actively developing in the past few quarters,” the Central Bank said in its 2012 stability review, the most recent one available.

In the meantime, Sequoia Credit Consolidation, a private debt collection agency, has warned that the volume of bad debts transferred by banks to collection agencies could soar in 2013 by 25 percent compared with last year’s level of 155 billion to 160 billion roubles.

While consumer lending will continue to grow in 2013, analysts predict a slower pace; moreover, they say that a number of factors will keep the credit bubble in check – including regulatory measures by the Central Bank, consumers’ concerns about their real wages and improvements in verifying potential borrowers’ credit worthiness.

Some new regulations will leave banks less room to manoeuvre as they will have to set side more funds to recover potential losses from bad loans.

“Some banks that pursue riskier lending policies may face problems but the situation in the banking sector as a whole will remain under control,” she added.

Analyst Yekaterina Kondrashova, of the Investcafe market research firm, agreed that the regulator’s measures would help avoid any credit bubble, but said Russian citizens’ uncertainty about their future and their real wage growth was the main factor that would trim their spending habits this year.

“That is why they will delay taking out loans for the purchase of a car or household appliances,” she said.

At the same time, as of last year, credit history bureaus have started playing an increasingly important role in Russian banks’ lending practices and should help banks improve their portfolios of personal loans.

“Banks normally take three to five business days to assess clients’ creditworthiness and check if they have also taken out loans from other banks,” she said.

“This is because our citizens’ income depends heavily on world prices for oil … and other raw material resources,” he said, adding that a drop in global demand for Russian export commodities – similar to the plunge experienced in 2008 – “could see the growth of overdue debt and defaults by borrowers.”

In the meantime, bank lending to individuals will continue to grow, although at a slower place, he said.

“Russian consumers can keep taking out loans because the provision of individuals with loans remains at a low level compared with Europe and the United States. This growth in lending will come to a halt when the market is saturated,” Tretelnikov said.

Simanovsky of the Central Bank said in November that he expected the growth of overall crediting in Russia to slow to 20 percent and consumer lending to 25-30 percent.

“After the rapid growth in the number of consumer loans extended in the first three quarters of 2012, the lending market is returning to a calmer state of development,” National Credit History Bureau chief Alexander Vikulin said.

Of all lending instruments offered by banks to Russian citizens in 2012, credit cards were the fastest growing, the bureau reported last week. While loans provided via this instrument still make up only 23.3 percent of the total number, their growth almost doubled in 2012, from 44.8 percent in 2011 to 74.8 percent last year.

The rest of the remaining 7 percent or so of the market is made up of auto loans and mortgages, with the latter becoming increasingly popular, growing by 50.5 percent in 2012, up from growth of 35.4 percent in 2011, according to data from the National Credit History Bureau.