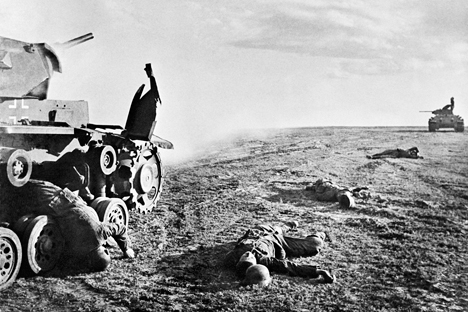 World historians tend to disagree about the significance of the Battle of Stalingrad for the outcome of the World War II. Source: Zelma / RIA Novosti

The Soviet Army scored many victories during World War II that were no less brilliant in terms of strategic results and military skill. Why, then, does Stalingrad stand out among them? The 70th anniversary of the Battle of Stalingrad marks a fitting occasion on which to reflect on this question.

The academic discipline of history and the growing cooperation among nations demand that the spirit of confrontation be banished from military history, requiring scholars to provide a profound, truthful and objective picture of World War II — including the Battle of Stalingrad. This is necessary, in view of the fact that some wish to falsify the history of World War II and “re-fight” it on paper.

World historians tend to disagree about the significance of the Battle of Stalingrad for the outcome of the World War II. After the war, Western scholars claimed that it was not the Battle of Stalingrad but the Allied victory at El Alamein that marked the biggest turning point of the war. For the sake of fairness, it has to be said for that the Allies scored a major victory at El Alamein, and this victory made a substantial contribution to the defeat of the common enemy.

Strategically speaking, though, the Battle of Stalingrad took place over an enormous territory (38,410 square miles), while the El Alamein operation was carried out on a narrow strip of the African coast.

The Battle of Stalingrad lasted 200 days and nights (from July 17, 1942 until February 2, 1943), while the battle at El Alamein lasted 11 days and nights (from October 23 to November 4, 1942). Moreover, the two battles cannot be compared in terms of intensity and ferocity. At El Alamein, the fascist bloc lost 55,000 men, 320 tanks and about 1,000 guns, whereas, in Stalingrad, Germany and its satellites suffered 10-15 times bigger losses. About 144,000 of their troops were taken prisoner, and a 330,000-strong army group was destroyed. The Soviet army also suffered huge losses — 478,741 men dead. Many of these lives could have been saved. Even so, the sacrifice was not in vain.

The military and political significance of the two battles stands no comparison. The Battle of Stalingrad took place in the main European theater of the war, where its outcome was being decided. The El Alamein operation took place in North Africa, which was a secondary theater of hostilities whose impact on the course of events could only be indirect. The world’s attention at the time was focused on Stalingrad, not El Alamein.

The Wehrmacht’s major defeats and huge losses at Stalingrad undermined Germany’s military-political and economic position, putting it on the brink of a deep crisis. The number of tanks and vehicles Germany lost in Stalingrad equaled the number that the German industry had produced in six months; the number of weapons they lost was equal to four months’ output; the number of mortars and small arms was equal to two months’ output. To make up for such huge losses, the German war industry had to work at the limit of its capacity. The manpower shortage became acute.

The debacle on the banks of the Volga River left an imprint on the Wehrmacht’s morale. The rate of desertion and disobedience in the German army increased, and the crime rate in the army rose. The number of death sentences passed by Hitler’s justice system on German servicemen increased markedly after Stalingrad. The German soldiers became less determined and came to fear being outflanked or encircled. Some politicians and top army officials began plotting against Hitler.

The Red Army’s victory in Stalingrad shook the fascist bloc, had a dispiriting effect on the German satellites and sowed panic and irreconcilable contradictions in their camp. To ward off the imminent catastrophe, the Italian, Romanian, Hungarian and Finnish leaders started looking for a pretext on which to pull out of the war and ignored Hitler’s orders to send troops to the Soviet-German front. Starting in 1943, not only individual soldiers and officers, but whole units of the Romanian, Hungarian and Italian armies began to surrender to the Red Army. Relations between Wehrmacht servicemen and those of Germany’s allies became strained.

The crushing defeat of the fascist hordes near Stalingrad also had a sobering effect on the rulers of Japan and Turkey, which abandoned their plans to declare war on the Soviet Union.

The success of the Red Army in Stalingrad and subsequent operations of the 1942–1943 winter campaign aggravated Germany’s international isolation. In 1942–1943, the Soviet government established diplomatic relations with Austria, Canada, Holland, Cuba, Egypt, Colombia and Ethiopia, and restored diplomatic relations with Luxemburg, Mexico and Uruguay.

Thus, it was the Battle of Stalingrad that broke the back of Wehrmacht and marked the start of a turning point in World War II, in favor of the Allies.

Makhmut Gareyev isan army general, veteran of World War II, and president of the Academy of Military Sciences. He holds a doctorate degree in military and historical sciences.