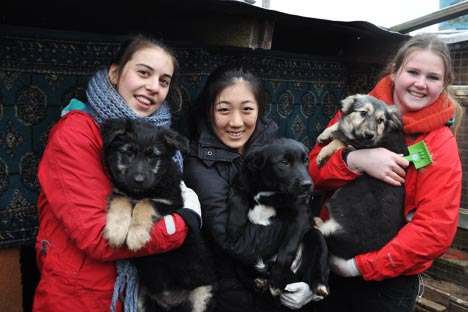 For many foreigners, volunteering provides relief from isolation — and help to local hospitals, orphanages and other communities in need.

Living abroad can be a lonely experience, especially in the first month or year when expats still struggle to find a way in to the culture, society, and most importantly, friendships with locals. Some foreigners find that a hospital ward or an animal shelter provides unlikely solace. Whether it’s weekly mentoring or manning a Christmas bake sale, many find that volunteering develops relationships year-round.

“For foreigners, charity is a habit,” said Lyubov Sidorova, vice chair of the Nastenka Foundation, which works with expat groups to help children with cancer. “Many of them have the resources, meaning money, time and skills, and they’re ready to share them with others.” Russia Now celebrates three expats who have deepened their lives in Russia through volunteerism.

Taking the bite out of abandoned dogs

Jiyoon Park once felt uneasy around the stray dogs that roam Moscow’s streets. “They’re intimidating because they’re barking. I used to be terrified of dogs.” Now she plays with them, walks them and feeds them as part of “Call of the Wild,” a group she started that raises money and volunteers for Moscow’s overloaded animal shelters.

Park, 17, is a student at the Anglo-American School of Moscow. Born in Seoul, South Korea, she spent time in both her native country and Spain before her father’s job moved the family to Russia four years ago.

While doing research to fulfill a school charity requirement, Park encountered “Zov Predkov,” a shelter outside the city. Many of its 500 dogs were abandoned by their owners. Park visits the shelter once a month with several other students, helping clean out pens and walk the animals. She also leads charity bake sales and tries to interest families in adopting animals.

The drive to the shelter is long, unmarked and bumpy. But Park says it’s worth it: “The dogs seem really happy every time I visit.” Perhaps even more important is the human interaction. “Since I live around my school, I usually just meet international families,” Park said. “But since I’ve been going to the shelter, I’ve been meeting more Russians, and I’ve been learning more about them and what they think.”

A helping hand for children in hospital

Pamela Spivey’s southern warmth feels just as at home in a Moscow pediatric ward as it does in her native Charleston, South Carolina. “There has been more than one time that a parent has started crying, and you can just reach out and hug that person and just share that moment,” she said.

Spivey, 53, relocated to Moscow in 2010 with her husband, who works for the Caspian Pipeline Consortium of British Gas. Now she heads Spread Sunshine, a charity project run by the American Women’s Organization (AWO) together with Nastenka.

Spivey and several other women bring food to the pediatric oncology unit of a local hospital. “We take snacks like juice and candies, or crackers for the babies and small toys,” she said. With the help of Nastenka’s Russian-speaking staff, they visit with patients and their families. “There’s a language difference, but it doesn’t seem to matter,” Spivey said. “You can just connect heart to heart, emotion to emotion, and just be there for somebody.” Other AWO members support Nastenka by donating diapers and toys. The group organizes a Christmas Arts and Crafts Festival, which this year raised around $35,000.

Last year, the women met Yuna, a 10-year-old girl being treated on the ward. “She used to follow the cart down the hall with us and draw pictures for the staff. She was just this bright spirit,” she said. After Yuna passed away last summer, the group has become more dedicated than ever to helping the hospital.

“No matter where you live in this world, people all want the same things,” Spivey said. “These experiences just remind you of that and teach you to get down past the cultural differences, past the language differences, to the things that connect us as humans.”

Finding friends for the disabled

While many expats come and go, Denise Roza has made a lifelong commitment to Russia — and helping the disabled people often pushed to its outskirts.

Roza, 51, is the head of Russia’s Best Buddies, the international nonprofit that seeks to integrate people with developmental disabilities into the community. She oversees a program of 150 volunteers at Moscow schools and universities. Each commits to meeting with a mentally disabled person for one academic year.

Born in Chicago, Roza has lived in Russia since 1989. She founded Perspektiva, a disability nonprofit, in 1994. Interested in doing more outreach to the intellectually disabled, she started Best Buddies in 2009 after meeting founder Anthony Kennedy Shriver at a conference.

In the organization’s office, she juggles phone calls in effortless Russian. “I’ve been here too long,” she laughs when she can’t remember a word in English.

She said one of the most successful friendships to date is between Vika and Vera. “When Vika was getting her driver’s license, Vera was even sitting in the backseat.” Volunteers and families come together at group events such as the Christmas cookie-decorating party, held this year at Spaso House, the American ambassador’s residence.

According to Roza, the concept of charity is only beginning to develop in Russia. “Volunteering really isn’t part of the culture,” she said. “It’s changing, but it’s still very new.” To combat dropout, Roza has spearheaded extra sessions and leadership trainings. She is also in the process of developing a new employment program. “Most people with intellectual disabilities will go to a school, but after that there’s nothing. That’s it. So they end up sitting at home,” she said.

Roza turns quiet when asked about herself, but she’s happy to talk about her work: “What Best Buddies has given me is an opportunity to get to know people with developmental and intellectual disabilities,” she said. “It’s important to really be a part of their lives.”