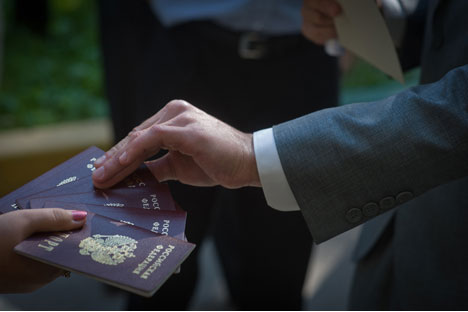 Russia is a good place to be if you are rich, and, if you want to lower your tax bill by being in Russia, you do not have to go so far as to receive a Russian passport. Source: Beznosov Mikhail / PhotoXPress

Gerard Depardieu’s Russian adventures have been a blessing to the establishment, advertising Russia as a way out for the rich looking to avoid high taxes. Experts say the path to Russian citizenship is not so easy.

After French actor Gerard Depardieu triumphantly received his French passport, Deputy Prime Minister Dmitry Rogozin tweeted: “In the West people aren’t very clued up on the details of our tax system. As soon as they find out, we can expect rich Europeans to migrate to Russia en masse.”

Since the mass protests kicked off in Russia last year, the Russian authorities have had to respond to the intelligentsia seeking refuge abroad, trying to convince both themselves and their compatriots that, in actual fact, this is all a show: no one really wants to leave Russia. And, right on cue, Depardieu arrives in Russia, having fallen out with French President Francois Hollande over his tax bill.

“Let’s just say this issue has already been decided, and decided in a positive way,” said Russian President Vladimir Putin, answering a question about Depardieu’s citizenship at a press conference in December. Depardieu contacted the Russian Ministry of Foreign Affairs himself and even wrote a personal letter to Vladimir Putin, according to the president’s press secretary, Dmitry Peskov. A few days after the French actor applied for Russian citizenship, a decree was published on assigning Depardieu citizenship, the president handed him a Russian passport at a special meeting in Sochi, and Depardieu was officially accepted as a citizen of the Russian Federation in Mordovia.

Russia is a good place to be if you are rich, and, if you want to lower your tax bill by being in Russia, you do not have to go so far as to receive a Russian passport. You can be a citizen of any country — or even a citizen of no country. The only criterion is that you have to be physically located in Russia for more than 183 days over the course of 12 consecutive months. Trips out of the country for recreational, health-related or educational purposes do not count. If you meet these criteria, you will only have to pay 13 percent. Moreover, Russia is rare in that it does not have a graded tax system depending on income.

“It would be even more favorable to live in Kyrgyzstan or Kazakhstan: there income tax is just 10 percent, but I doubt many people know about this,” says deputy director of the Center of Fiscal Policy, Alexander Deryugin.

So, in theory, Russia has what it takes to tempt rich, tax-weary, Europeans. However, in practice, the picture is quite different. “Here in Russia a heavy tax burden is placed on business, so businessmen are not flocking here in droves; but, for ordinary citizens, it does indeed seem favorable. But if this is a one-off PR-stunt, and the authorities are actually doing it in the interests of attracting wealthy foreigners to Russia, then the president needs to personally reassure people that he is not going to suddenly raise income tax or move away from the flat-rate system,” says Deryugin.

Even the wealthiest overtaxed Europeans who suddenly decide to join Depardieu in Russia will find that the path toward Russian citizenship can be long and windy. “There are various criteria for recognizing a person as a tax resident, and these are connected with ‘the center of vital interests’ — property and family. So even if you do become an official tax resident of Russia, this does not guarantee you will be free of tax obligations in other countries,” says Mikhail Filinov, a partner in the individual taxation division of PwC consultancy.

“It’s very common for Russian businessmen to have business interests in Russia, and property and family based abroad (most often in France, Italy or Spain). Even if the businessman himself spends most of the year here and sees himself as a tax resident of Russia, under French legislation, he could be recognized as a tax resident of France," he says.

"Of course there is a procedure in place between Russia and France, where the two tax authorities define where this person officially resides and where he should pay tax; but this is a complicated process and can be unpleasant for the taxpayer. Nevertheless, this is quite a common procedure for people to have to go through in Russia at the moment,” Filinov added.

As attractive as Russia may be as a tax haven, before receiving a Russian passport even the richest and most successful foreign citizen will have to go through all the channels set by the Russian Federal Migration Service (FMS) — a decree, as in the case of Depardieu, is still a one-off. The FMS says there is no procedure in place in the government for emergency granting of citizenship.

“This is quite rare; all that happens is the president issues the relevant decree and we complete all the documents in an urgent timeframe. I do not understand why Depardieu’s citizenship caused such a furor — this only makes us more attractive to foreigners,” says government press secretary Zalina Kornilova. FMS statistics indicate that 51,276 people received Russian citizenship in 2012.

According to Kornilova, each year this figure includes an increasingly large number of “top specialists from Europe,” although most citizenship applications come from people in the CIS.