Russia marks the 70th anniversary of the Battle of Stalingrad 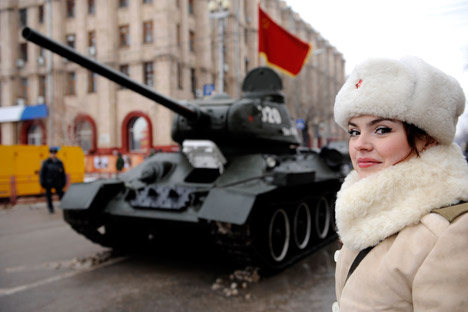 On Feb. 2, nearly 1,200 guests made up of 200 delegations from dozens of Russian regions and 18 countries around the world – including Germany – turned out to celebrate the 70th anniversary of the Battle of Stalingrad. Amid parades, concerts, and national festivities, residents, veterans and President Putin himself shared their emotions about the historic battle.

It’s no lie when they say that Volgograd was built on bones. The mass war grave is in the heart of the city, on the Avenue of Heroes, and the Eternal Flame stands on the spot. It is a colossal burial place – the Mamaev Kurgan, under whose monument “The Motherland Calls”lay the remains of 36,000 soldiers, whose bodies were brought from all over the city when Stalingrad was liberated.

Twenty thousand local people thronged the Avenue of Heroes and the Square of Fallen Heroes. Among them was the family of Oleg and Natalya Medvedev, who had come with their two sons, Misha and Vanya, to the Eternal Flame.

“Stalingrad Victory Day has particular significance for our family,” said Oleg. “One of my grandfathers, Fyodor Yegorovich Dedovich, fought on the Mamaev Kurgan. Their division was sent directly into the fighting, straight off the train. For him, the fighting lasted two hours before he was wounded. He was taken to a hospital on the left bank of the Volga. In the end, he got to Berlin. My other grandfather was killed in the battle for Leningrad. When we speak of celebration, there’s both sadness and joy in it.”

The sense of pride flowed through all who watched the parade, in which 650 servicemen of the Southern Military Region, students of the Volgograd Police Academy and cadets of the Cossack Corps took part.

The parade began as usual with the leading out of its official symbol – the Banner of Victory. This group was followed by another, bearing the standards of all four fronts of the Battle of Stalingrad; the standards were borne by an Honor Guard in parade uniforms, with three in the historic uniform worn by the Red Army soldiers who captured Germany’s field marshal at Stalingrad, Friedrich  Paulus, 70 years ago and just 330 feet from this very spot.

There were no separate standards during the war – those on parade were sewn 10 years after, especially for ceremonial events. There are, however, the authentic battle flags of the Red Army, which were carried at Stalingrad and today are kept in the Victory Hall of the Battle of Stalingrad Panorama Museum. They have been removed from the Victory Hall only once – for the ceremonial concert on February 2, 2013, where veterans of the war were addressed by President Vladimir Putin.

“The victory of our troops at Stalingrad is one of the greatest examples of valor and heroism in military history,” Putin said in his congratulatory address. “The courage of the defenders was unparalleled, without precedent. Yet Stalingrad has won not only a military victory, but a great moral victory – the victory of patriotism and love for the Motherland, for the Country, over evil, hatred and aggression. Stalingrad will forever stand as a symbol of the invincibility of the Russian people, and the unity of the people of Russia.”

The Russian head of state went on to emphasize the role that civilians played in the victory. “When you look at pictures of those wartime years, you cannot help asking: ‘How did the people of Stalingrad survive?’ ‘Where were they living?’ ‘How could anyone survive amid those ruins?’ Yet we know that they not only lived there, but also worked and fought. The people of Stalingrad made an incalculable contribution to the struggle for Stalingrad.”

Anastasia Biryukova recalled the days 70 years ago: “It seemed as though there was nothing left to burn. But it kept burning, the shelling never stopped.” A native of Stalingrad, Anastasia went to the front as soon as she had finished school in June 1942, even though she was not yet 18. “What on Earth was a girl doing at the front? We’re the only people who know why – we, who were there,” she said. She served as a radio operator with the 116th Infantry, part of the 66th Army that liberated the northern part of the city. After Stalingrad, she served at the Battle of Kursk and took part in the liberation of Belgorod, Orel and Kharkov. She found herself in Romania when the war ended.

“It might have been 70 years ago, but even after all those years, I still have just one emotion on February 2nd – complete and utter happiness!” said Anastasia.

An exhibition titled “One for all...” opened at the Battle of Stalingrad Museum Panorama during the victory anniversary. All of the exhibits are authentic items from the Battle itself: uniforms, weaponry, trophies, household items and documents of the city’s defenders. Among those defenders were people of different military backgrounds, professions and ethnicities. One of those who helped prepare the displays was Aleksandra Batiushkova, a resident of modern-day Volgograd (the city formerly named Stalingrad).

“My dad fought aboard a gunboat of the Volga Flotilla” said Aleksandra. “He never liked to talk about the war much. We were his daughters, we didn’t ask – we were little and didn’t understand those things. Now I wish we had. But we’ve got his photos and his medals – including the Medal for the Defense of Stalingrad, and another for the defense of Sebastopol.”

“We know very little about the gunboat flotilla’s history,” said Svetlana Argastseva, director of the exhibitions section of the Battle of Stalingrad Museum Panorama. “It was set up to support the infantry from the water; the boats were mounted with light guns. You could say they were ‘floating cannons.’ They were in the line of fire continuously, so many of their crewmembers were killed. This makes the information we can get from their family archives even more valuable.”

The main attraction for the Stalingrad war veterans and their children was a concert by famous opera singer Dmitri Hvorostovsky, who performed wartime songs in a special ‘military program’ put together with conductor Constantine Orbelian. “I was brought up on stories about the war, on music, and on our family history. It’s probably why I I’m so sensitive to this sadness,” said Hvorostovsky. “My granddad fought in the battle for Moscow – he was killed in one of the first battles. My other granddad made it through the war. He was in the tank corps, and he ended the war in Königsberg [modern-day Kaliningrad], but was then immediately posted to the Far East. He was lucky enough to have been among the survivors.

“Performing this 'military program' here in Volgograd is a special honor, and a responsibility. There are feelings of desperate bitterness, compassion and involvement which never leave me. They arise every time I perform these songs, no matter where I am. I get a lump in my throat, and there’s nothing I can do about it. I’ve performed these songs in many places all over the world, and people’s reaction is always the same – there are tears, people cry, or they stand up, feeling what’s been sung. It’s something completely remarkable, and I can’t really explain it,” Hvorostovsky said.

The anniversary events concluded with a ceremonial artillery salute at the Mamaev Kurgan. A 30-gun salute was fired to honor both the fallen and the survivors – those who defended their city, their country and the world.