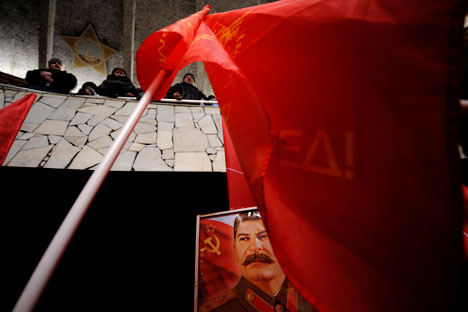 The conflict between Stalin’s admirers and critics often heats up in the run-up to particular landmark dates in 20th-century Soviet history. Source: Mikhail Mordasov / Focus Pictures

Disputes about Stalin’s role in history have flared up again, as the legislature of the city of Volgograd rules that the city shall be called Stalingrad on dates commemorating key anniversaries of World War II.

Volgograd, one of 15 Russian cities with a population of more than one million, is to be called Stalingrad for six days a year in official documents and during official events. The city on the banks of the Volga River was named in honor of Joseph Stalin in 1925. However, in 1961, on a wave of de-Stalinization, the Communist Party leadership renamed it “at the request of the working people.”

This time the decision to rename Volgograd on World War II anniversary dates (in particular on Feb. 2 – the anniversary of the end of the battle at Stalingrad) was taken by the Volgograd city duma “on the basis of numerous requests by veterans of the Great Patriotic War.” The law, however, requires that, if a city is to be renamed, there must first be a referendum in which not less than half the city’s residents must vote.

Those who took part in the Battle of Stalingrad are not all of one mind on the question of renaming the city. “You’ll never get a clear answer on who needs this and who doesn’t. The people should make this decision. Then, when there’s been a national discussion, a decision should be taken,” says Alexander Maklakov, chairman of the regional council of veterans.

So far, no more than 50,000 people have officially supported the idea of renaming the city – on the eve of the voting in the Volgograd duma, the Communist Party of the Russian Federation (CPRF) and the Trade Union of Russian Citizens handed in to President Vladimir Putin’s reception room 50,000 signatures calling for Volgograd to be renamed Stalingrad.

“When we talk about restoring the name of Stalingrad to the city, we’re not obsessed with names,” says Nikolai Parshin, leader of the CPRF representatives in the Volgograd regional duma. “All over the world, when people speak of Stalingrad they are thinking of the historic events of 1942–43. Hotels and restaurants in Europe have been named in honor of the Battle of Stalingrad. In this sense, we’ve ended up lagging behind Europe.”

In Paris, for example, there is indeed a Stalingrad metro station, situated near the Place de la Bataille de Stalingrad.

However, one might see more than a desire to grow closer to Europe in the initiative to rename the city. This fall, the residents of Volgograd have to elect a mayor and a city duma. “The Volgograd–Stalingrad issue crops up every time before an election, and then it fades away afterwards. It’s usually the Communists who exploit it,” says Oleg Mikheyev, a duma deputy from the Just Russia party representing the Volgograd region.

Mikhail Vinogradov, director of the St. Petersburg Policy Foundation, believes that, for the ruling party (United Russia), the current renaming campaign is “a purely tactical move, not without an element of schizophrenia, designed to deprive the CPRF of its only resource in the elections – the name of Stalin on its banner.”

Sixty years after the death of Stalin, many people in Russia value his role in history highly. In 2008 the Rossiya federal TV channel asked viewers to choose the “the most esteemed, prominent and symbolic person in Russian history” by voting in its “Name of Russia” poll. More than 519,000 out of a total 4.5 million viewers voted for Stalin. Only Prince Alexander Nevsky, who repelled the crusading Teutonic Knights in the 13th century, and Prime Minister Pyotr Stolypin of the Russian Empire, who is considered one of the greatest Russian reformers, received more votes.

The conflict between Stalin’s admirers and critics often heats up in the run-up to particular landmark dates in 20th-century Soviet history. On the day when the victory in the Battle of Stalingrad is commemorated, the Stalinists will put “Stalin buses” – buses bearing portraits of Stalin – on the streets of Volgograd, St. Petersburg and Chita. There will be five such buses in Volgograd, and they will run right up through May 9 – Victory Day in World War II. This has been done since May 9, 2011. Members of the liberal-democratic Yabloko party have promised, as in 2011, to pour paint over the “Stalin buses.”

Mikhail Fedotov, head of the Russian Presidential Council for Human Rights, does not regard the Stalinists’ action as ethical. “If you want to honor the memory of our heroes, there are more civilized and justified ways, more appropriate to the role played in the war by the ordinary soldier, the ordinary officer and the ordinary general, and not the Supreme Commander-in-Chief, on whose conscience are millions of innocent victims,” says Fedotov.

Fedotov’s position is shared by Dmitry Demushkin, leader of the Russkiye nationalist movement: “The Battle of Stalingrad was a triumph for the Russian people, and we need to distinguish it from Bolshevism. Stalin raised a toast to the Russian people after he had sent it to the camps.”

In the end, the idea of permanently renaming Volgograd Stalingrad was not supported by the city or the presidential administration. "Renaming the city wasn't discussed in the Kremlin. It even wasn't in the agenda, " said Putin spokesman Dmitry Peskov in comments to Russian daily Izvestia.

Analyst Gregory Birg agreed with the logic of the authorities. According to him, renaming the city could be very expensive. The costs to the population of changing documents could reach up to 550 million rubles ($18.3 million).

Based on materials from Rossiyskaya Gazeta, MK, Gazeta.ru.