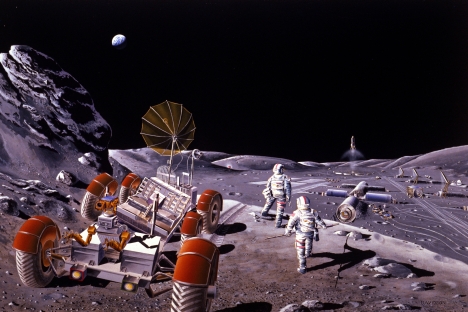 Russian and American scientists to begin large-scale lunar exploration. Pictured: Artist concept of a base on the Moon. Source: NASA / Wikipedia

Russian scientists to begin large-scale exploration of the moon with the construction of Luna-Glob-1.

Recent studies by Russian and American scientists have shown that manned stations could be established on the moon, thus making lunar exploration the priority in the current space race. Russian scientists are developing three probes to analyze the moon’s surface for the construction of such stations. They hope to begin testing a landing platform in 2015.

The unapproachable moon has always fascinated scientists. Twentieth-century technological advances paved the way for the exploration of Earth’s natural satellite and, at the start of the 21st century, Russian scientists are thinking about ways to populate the moon.

Scientists argue that explorers will be able to use the water and building materials available on the moon. If they succeed in this, the moon will become a new and exciting opportunity for research, says Yury Makarov, head of the strategic planning and task programs at Russia’s federal space agency, Roscosmos. Furthermore, there is no seismic activity on the moon, which means certain kinds of research facilities can be placed there.

Still, there is a long way to go before apple orchards are on the moon (a line from a Soviet song) — or fitness centers, for that matter. First, scientists need to analyze the structure of the moon’s soil. To this end, the Space Research Institute (IKI) of the Russian Academy of Sciences is developing three autonomous probes to work on the moon’s surface.

Luna-Glob-1, a simplified landing probe mission, will start to test the landing platform in 2015. One year later, the Luna-Glob-2 orbiter will follow and, in 2017, the heavy Luna-Resurs landing module with a broad range of scientific gear (possibly including an Indian rover) will be launched.

Igor Mitrofanov, head of the space gamma-ray spectroscopy lab at IKI, says that the construction of Luna-Glob-1 is underway. “The contract is worth several billion rubles, which is a typical amount for an automatic interplanetary station,” the scientist says. “We will be doing our best to complete this project.”

“We are currently seeing the kind of space race we saw in the 1960s-1970s," Lev Zeleny, director of the Space Research Institute told RBTH. "The moon is once again the grand prix of this race. China has announced plans to have its astronauts walk on the moon soon."

"The growing interest in the moon can be attributed, to some extent, to the recent findings of studies conducted by American and Russian scientists," he added. "A device created in our country has shown that there were large water reserves on the moon, which is crucial from the point of view of establishing manned stations on our planet’s natural satellite.”

The space efforts of Russian scientists can be divided into two major groups: research and exploration. There are many space objects for research but, when it comes to exploration, there is just the moon, which is still a distant prospect.

As of today, only one plan has been elaborated for exploring the moon — the Luna-Glob mission. This is an integrated project that includes studies of the topography, chemical and mineralogical content of the lunar soil, a search for moon ice in so-called cold traps near the poles, and studies of the interaction between the moon and interplanetary atmosphere. Several penetrators will be delivered to the surface of the moon to analyze the structure of the satellite.

The Luna-Resurs project will be carried out with Indian colleagues and will also focus on the polar areas of the moon, not unlike the Luna-Glob mission.

The use of the moon as a natural research facility can be a logical continuation of the current lunar program. For example, an automatic radio telescope could be placed there, comprising separate receivers of radio emissions evenly spread across the moon’s surface. The main advantage of a lunar telescope is the absence of atmosphere on the moon, making the tool more sensitive and providing a higher angular resolution.

“There are preconditions for developing the lunar deposits, including as part of manned missions. Even so, this is a matter for the distant future. We must learn how to land on other planets, so we need to land twice on the moon using the Luna-Glob orbiters and landers,” says scholar Lev Zeleny.

There is not enough room for mankind in near-Earth space, so outer-space missions are coming.

“We feel at home at altitudes of up to 350-400 kilometers [217-248 miles],” says Gennady Raykunov, general director of the Central Research Institute of Machine Building. “I’m certain we will have new challenges after the ISS, as we’ll need a space infrastructure to explore the moon and send spaceships to distant planets…”

One would naturally think about missions to Mars.

“If we compare moon and Mars missions, I believe that lunar explorations should be a sort of prelude to exploration of Mars. However, in the context of exploratory tasks, we must give priority to the red planet. Mars studies could provide answers to the secrets of biospheric and climatic processes on Earth,” Zeleny says.