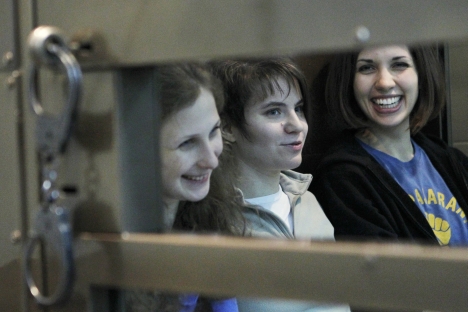 Jailed punk group Pussy Riot has filed an appeal to the European Court of Human Rights, claiming the Russian government violated several articles of the Convention on Human Rights in sentencing them to prison.

The members of the feminist punk group Pussy Riot, who were sentenced for their irreverent “punk prayer” in the Cathedral of Christ the Saviour, have filed an appeal with the European Court of Human Rights (ECHR).

They insist that the Russian government be found guilty of violating their freedom of expression, right to fair trial and right to decent treatment. The ECHR seems very eager to consider the punk group case, as the judges asked lawyers for the three convicted Pussy Riot members to submit all relevant documents as soon as possible in order to launch the proceedings.

The complaint “Nadezhda Tolokonnikova, Maria Alyokhina and Yekaterina Samutsevich vs. Russia,” obtained by Kommersant fills 55 pages, while additional materials take up another 300.

Pussy Riot lawyers claim that Moscow’s Khamovniki District Court, which sentenced the three punk group members to two years in prison for their “punk prayer” in the Cathedral of Christ the Saviour on August 17, 2012, failed to comply with several articles of the European Convention on Human Rights, including article 10 (freedom of expression), article 5 (right to liberty and security of person), article 3 (prohibiting torture) and article 6 (right to a fair trial).

The lawyers insist that the group’s act in the church should not be treated as an attempt to insult religious shrines and beliefs (the considerations that underlay the sentence), since it was an artistic performance, which cannot be judged outside of the context of the political situation in Russia.

The authors of the complaint note that Pussy Riot was formed following the statement by then President Dmitry Medvedev, who said on September 24, 2011 that he would not run for a new presidential term — making way for Vladimir Putin.

On February 1, 2012, Russian Orthodox Patriarch Kirill expressed what the group considered to be public support for presidential candidate Vladimir Putin at the Bishops’ Council held in the Cathedral of Christ the Saviour. This “outraged the participants in Pussy Riot,” who already had a rich experience in political performances.

“The girls began preparing for another political protest only as a response to that statement. They worked out symbols, an action plan and lyrics, which were later found to insult the feelings of Orthodox believers. Yet the act should be perceived exclusively as a response to the words of the Primate of the Russian Orthodox Church, who said that he openly supported a specific presidential candidate,” the lawyers for the punk group say.

“It is more important for the court to declare our innocence and the Russian authorities guilty of violating human rights. I think we have a good chance of winning, because the whole of Europe has been keeping an eye on our case,” Ekaterina Samutsevich, a member of Pussy Riot, told Kommersant.

Ksenia Chernega, head of the legal department of the Moscow Patriarchy, has doubts that the ECHR will allow the complaint lodged by Pussy Riot.

“They were sentenced not for certain statements, but for hooliganism. They were found guilty of performing acts of hooliganism. Furthermore, freedom of speech is not an absolute freedom and can be restricted to protect certain values. If their performance insulted a group of people, they should be punished,” she told Kommersant.

Kommersant earlier reported that the ECHR was particularly interested in considering the Pussy Riot case, out of thousands of complaints filed by those willing to sue the state (Russia is by far the leader in Europe in the number of such appeals).

Lawyer Irina Khrunova, who sent a preliminary complaint to Strasbourg on behalf of the punk group, received a letter from the ECHR with a request to submit additional documents as soon as possible, this being indicative of the court’s willingness to consider the Pussy Riot case.