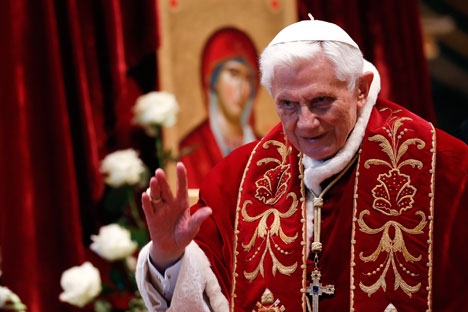 Pope Benedict XVI: "“I have come to the certainty that my strengths, due to an advanced age, are no longer suited to an adequate exercise of the Petrine ministry.” Source: Reuters

A few hours after Pope Benedict XVI announced his resignation, Russia was already thinking about building relations with his successor.

It had not happened for nearly 600 years. On February 11, 2013 Pope Benedict XVI (Ratzinger) announced his resignation in Latin to the Vatican.

“I have come to the certainty that my strengths, due to an advanced age, are no longer suited to an adequate exercise of the Petrine ministry,” he said.

In Russia, the pope’s Russian hashtag immediately became one of the most tweeted in the hours following the news, and there was no lack of comments.

Benedict XVI’s papacy lasted eight years. His resignation could mark a turning point in relations between the Vatican and the Russian Orthodox Church.

First deputy chairman of the State Duma’s Committee on International Affairs, Leonid Slutsky, has made it clear that the election of a new pope could open up a new phase of dialogue between the Russian Orthodox Church and the Catholic Church, according to RIA Novosti.

“At this time, it is very important to further develop relations between the Vatican and the Orthodox Church,” he said. “I believe that the Russian Church has all the necessary elements to approach this matter in the correct way. The meeting between the patriarch and the soon-to-be-elected pope could be a milestone. But this will happen only when the two churches deem that the necessary conditions for a meeting exist. I hope this happens soon.”

Hilarion, metropolitan of Volokolamsk and chairman of the Department of External Church Relations, told Vzglyadthat Pope Benedict’s decision was “a personal act of courage and humility.”

“The news of his resignation was a surprise even for his closest collaborators,” the metropolitan said. “The Russian Orthodox Church is grateful to Pope Ratzinger for his work in understanding and solving problems that obstruct the relationships between Orthodox Christians and Catholics, especially in regions such as Ukraine."

"I talked about Pope Ratzinger just a few days ago during a meeting with the new Russian ambassador to the Vatican, Aleksandr Avdeyev," said Hilarion. "He emphasized the positive direction that the relationship between the Russian Church and the Vatican has taken since the arrival of Benedict XVI. He is a highly respected theologian, an expert on orthodox traditions. I was struck by his calm and his meditated answers, as well as his acumen in trying to solve problems."

The Metropolitan Hilarion also wished Pope Benedict XVI’s successor the greatest of success in “continuing the dialogue  between the two churches, for the good of the whole Christian world.”

Patriarch Kirill on four years as patriarch: a lot has been done, a lot remains to do

Patriarch Kirill also returned to the topic of relations between the two churches recently, stressing that he has by no means ruled out the possibility of an official meeting with the head of the Vatican.

“I do not exclude the possibility of meeting the Rome Pope at any time, but we have to work to create the conditions necessary for that to happen,” he said.

According to Kirill, the Orthodox Church and the Catholic Church have many opinions in common today, such as “matters regarding the family, marriage, children and safeguarding Christian values in Europe.”

Pope Benedict’s resignation, which will become effective on February 28, 2013, among other things, coincides with the arrival in Rome of the former Russian minister of culture, Aleksandr Avdeyev, now appointed Russian ambassador to the Vatican.

The pope's decision comes after a dark period in Vatican history, marked by scandals and internal struggles. Not long ago, in a lengthy interview, Benedict XVI himself considered the possibility of leaving office, which is allowed by canon law.

“When a pope becomes fully aware that he is no longer capable physically, mentally and spiritually to perform the duties entrusted to him, then he has the right under certain circumstances — the duty even — to resign,” he said.

The last pope to resign was Gregory XII in 1415. Before him, Celestine V reigned — the pope “who by his cowardice made the great refusal,” as Dante wrote in the Third Canto of his famous “Inferno.”