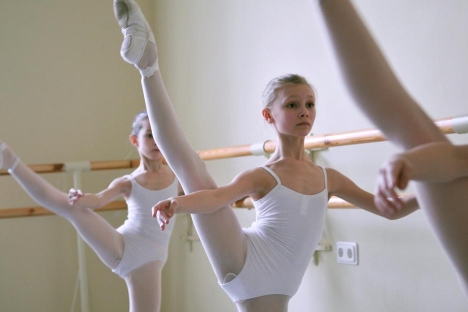 The stressful life of a ballet dancer starts with getting into ballet school. Source: Ekaterina Petrova

Why do we need ballet? Why would children sacrifice their childhood in order to become ballet dancers? Why do Russians continue dreaming about careers in ballet, when so few ducklings turn into real swans? RBTH takes a look behind the scenes and explores the long, hard road for aspiring ballet dancers.

There are many paths to ballet. Children often make the life-changing decision on their own, even before they start school. “I saw ‘Swan Lake’ in Chelyabinsk when I was five. I was struck by the fact that it felt just like a fairytale: something refined, elegant and distant; something you can’t touch.

After the performance, I was set on what I wanted to do with my life — and it wasn’t some kind of kid’s pipe dream,” says Anastasia Kolegova, a soloist in the Mariinsky Ballet Company.

Little has changed over the past 20 years. If you want to make it as a ballet dancer, the road is pretty much the same for everyone. The biographies of prima ballerinas and principal dancers are full of stories of young girls and boys who, enchanted by the beauty they saw on screen, danced near the television trying to copy the moves.

Bolshoi Theatre prima ballerina Anastasia Goryacheva, for instance, made up her mind to become a ballerina after watching a film about Anna Pavlova.

Children who have caught dance fever test themselves in any way they can. Yan Godovsky, leading soloist at the Bolshoi Theatre, was accepted into ballet school after winning a ballroom dancing competition at summer camp.

Sometimes, though, it is their parents’ call. Standout ballet dancer Natalya Osipova made the transition from artistic gymnastics to ballet, because she “didn’t want to hurt her mom’s feelings.” Indeed, a child born into a ballet family does not have many options. Just ask Yekaterina Shipulina, leading soloist at the Bolshoi Theatre: “My sister and I spent our childhood behind the curtains watching mom and dad. We knew exactly what we wanted to do when we grew up.”

Once the decision has been made, the child has to grow up very fast. It turns out that the beauty we see on TV is a result of many years of hard training, day in and day out.

The stressful life of a ballet dancer starts with getting into ballet school. Children have to go through rigorous entrance examinations, where their health, build, flexibility, coordination and posture are checked, alongside their musicality and the ability to twist their feet. Screening committees used to travel around the Soviet Union in search of gifted children, whom they duly found in all corners of the country — even in the most far-off villages.

This is how Bolshoi Theatre prima ballerina Svetlana Adyrkhaeva was discovered. Such committees are a rarity these days, however.

Ballerina dances away from United Russia

There used to be dozens and even hundreds of applicants for a single place in ballet schools, especially in the Moscow and St. Petersburg ballet academies. This is only true of girls now. There is a shortage of boys in ballet, and not just in Russia: parents are not ready to let their sons pursue a ballet career when there are professional sports with substantially more money up for grabs. Also, young men used to be released from mandatory military service if they worked in a ballet company, but the quotas have since been abolished. The issue of draft-age men is tackled at the level of the Ministry of Defense, “which can satisfy requests from the Ministry of Culture and local authorities.”

Many of the students accepted to ballet academies are further weeded out: low marks in classics for boys or a few additional pounds for girls could mean getting shipped off to regular schools before graduation.

The harsh curriculum (which consists of a full school load, plus daily ballet practice, as well as special subjects such as the history of ballet and piano lessons) leaves no time for the kids to be kids. In addition, those who come from other cities find it hard to adapt to their new lives without their parents.

Well-known ballerina Svetlana Zakharova recalls her academy days: she was sent to boarding school, where she shared a room with seven other girls. Her childhood ended in an instant, and the struggle for survival began. The children work 24 hours a day and have to meet impossible requirements.

The main challenge is to combine technique with artistry. A Russian ballet website describes the problem: “The job of a dancing school is not so much to train a child to dance (which can be done in much less time), as it is to turn his or her body into an instrument to create an image on stage.”

Bolshoi Theatre prima ballerina Evgenia Obraztsova understands how professional perfection is attained: “I was beaten when I failed to place my feet in the fifth position, when I was short of a perfect knee or lift. To cheat on lifts was a criminal offense back then.” And the competition is fierce. A child understands at a very early age that there are more gifted competitors around, and the teachers point these children out. Only real fighters manage to survive.

It is during this period that students begin to really understand their work and why they are there. It is something fundamentally different from the joy of a child who has seen a beautiful dance or managed to please their parents. It is a conscious decision wherein the children begin to understand why they tolerate bleeding feet and lack of sleep.

“I liked it that I was making progress, and I grew even more willing to dance,” Bolshoi Theatre principal dancer Alexander Volchkov says.

In the run-up to graduation, students prepare for their final exams and the academy is shaking in excitement: people are wondering whether they have been accepted at their choice of ballet companies. Graduates are told scary (and exaggerated) stories of the hard times that dancers are given in theatres. They are told that glass may be put in their shoes, that their costumes may be maliciously destroyed, and that climbing to the top is only possible if they have connections.

By this time, professors and students know the names of the best graduates who will be dancing in the Bolshoi or Mariinsky companies. Still, the ultimate decision is made by representatives of the theatre companies, who attend the final exams at the leading dance academies in the country.

Most of the graduates will continue in less important troupes, while others will move to foreign companies (where Russian dancers are in demand) or graduate without being picked up by a ballet company.

The standard situation for a free agent is as follows: “You go to a casting and see the crowd of hopefuls. First, it’s the bar: they then tell you ‘Go on,’ so you go to the center of the room, perform a routine and they either say “Sorry, bye” or “Go on.” So then you show them the jumps. That’s how they do the screening, and you get five people left out of 35.”

New dancers start in the chorus — even if they are potential leading dancers — because they need to learn the ropes in the theatre and gain experience. However, not all of the young dancers are willing to start a fire with stones. A competitive company can lure a gifted young dancer, if the company’s director is smart enough to offer serious parts.

Vladimir Malakhov, artistic director at the Berlin State Ballet, wooed international ballet star Polina Semionova almost immediately after she graduated in Moscow, where she would have been taken on by the Bolshoi Theatre as a regular dancer. The Bolshoi, for its part, managed to get its hands on St. Petersburg Academy graduate Olga Smirnova by offering her leading parts in Moscow.

The lives of young artists are filled with agony and ecstasy: unavoidable injuries, intrigues, victories at ballet competitions and the part of the third armor-bearer at a matinee for kids. There will be dreams of coveted roles and the everyday routine of ballet practice, important tours and agonizing waits for new roles in long queues alongside their colleagues. They will crave the applause of the audience and retire at 40 with a miserable ballet pension.

Yet, for some of the really lucky ones, the ugly duckling will one day turn into a magnificent swan — the symbol of Russian ballet.