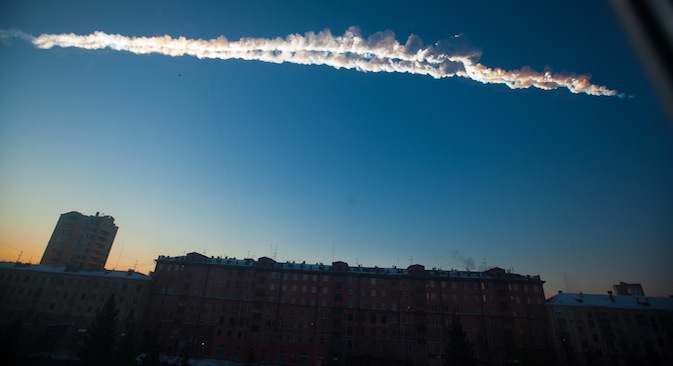 The meteorite shower in Russia's Urals puzzled scientists and politicians. In this photo provided by Chelyabinsk.ru a meteorite contrail is seen over Chelyabinsk on Friday, Feb. 15, 2013. Source: AP / Yekaterina Pustynnikova

After meteorite explosion in Russia's Urals Russian officials and scientists try to assure people that meteor shower is hardly likely to happen again in the region. Meanwhile, some astronomers are hesitant about making exact predictions because, according to them, ignorance in this issue is ten times more than knowledge.

While Russia is dealing with consequences of Friday's meteorite explosion that injured more than 1000 people and smashed windows in almost 300 buildings, scientists and officials make predictions on probable meteor falls in future.

Russian authorities try assure people that meteor shower is hardly likely to fall again on the region, while some astronomers are hesitant about making exact predictions because, according to them, ignorance in this issue is ten times more than knowledge.

Yet the Russian Emergency Situations Ministry does not expect another meteorite shower over the Urals despite some media reports.

"We currently don't expect another meteorite to fall. We have not issued any recommendations to residents to stay home and keep away from windows," said Vadim Grebennik, the spokesperson for the Russian Emergency Situations Ministry in Urals.

Likewise, Russian scientists are not predicting a new meteorite fall similar to the one that occurred in the Chelyabinsk region, according to Dmitry Badyukov, deputy head of the Meteoritics Laboratory of the Institute of Geochemistry and Analytical Chemistry of the Russian Academy of Sciences.

The meteorite fell in the Chelyabinsk region's Satka district, in an area located around 80 kilometers from the district's administrative center,  the Emergency Situations Ministry spokesperson said. Source: Youtube / martysoffice

Some media earlier reported that more meteorite debris may fall in the Urals around 1:00 p.m. and 11:20 p.m. Moscow time on Friday.

Meanwhile, the reports about an asteroid that should have flight past the Earth on Friday evening sparked more fears about the future of the Earth. Yet this asteroid didn't pose any threats to our planet, said Russian Emergency Situations Minister Vladimir Puchkov.

"We keep monitoring Russia's territory in connection with reports that an asteroid will fly past the Earth at 11:25 p.m. Moscow time at a distance of 27,000 kilometers," he said at a conference on Friday.

Although the asteroid dosn't pose any threats Earth, Russian Deputy Prime Minister Dmitry Rogozin speaks about the need to prevent extraterrestrial objects from falling on to Earth.

"I have already spoken of the need for an international initiative aimed at creating an early warning system that would also prevent extraterrestrial objects from coming dangerously close to the Earth," Rogozin told Interfax.

Existing missile defense systems can be used only against ballistic targets because they follow fixed trajectories in the near-Earth space, but as far as extraterrestrial objects are concerned, it will be a direct "hit" from outer space," he added.

"At the moment, neither we nor Americans have such technologies [to shoot down meteorites and asteroids as they approach the Earth]," Rogozin said. Russia and other major countries have their own outer space monitoring systems, but they are mainly intended to track down space junk that comes dangerously close to spacecraft."

"We need to think about this issue," he added. "We should not wait for new accidents. Rather, we ought to tackle these problems in advance," Rogozin said. "In any case, it is a matter of high technologies. The tasks facing leading world powers and structures specializing in space exploration are quite rational and understandable."

If countries want to solve this problem, they need to work together "instead of piling up military gadgets in space that can only weaken security on our planet," he said.

Currently, astronomers have no information on the size and trajectories of the flights of 90 percent of the space objects that may threaten Earth, Oleg Malkov, the head of the Institute of Astronomy of the Russian Academy of Sciences, told Interfax-AVN.

"Unfortunately, there are very many such objects around us in space," he said. "We call them asteroids, or small bodies of the solar system. The larger the bodies, the fewer they are. Small objects are more numerous than large ones. In general, we know the trajectories and behavior of some 10 percent of everything that may threaten us."

"Thus, our ignorance is ten times more than our knowledge," he added.

A meteorite fell on Russia's Southern Urals on Friday morning bringing about a huge explosion that injured more than 720 people and almost 300 buildings in the region. The shock wave smashed windows in many houses in Satka and Chelyabinsk.

Russian Emergency Minister Puchkov instructed the crew of the Struna laboratory to check whether the buildings are stable enough in the zone where a meteorite fell on.

"An emergency situation regime has been declared in Chelyabinsk Region," Puchkov said. "The emergency warning systems of the Urals and Volga federal districts remain on alert. The national system of monitoring and predicting emergency situations remains in alert, too."

The Russian space control systems have identified this space object that exploded over Southern Urals as natural in origin, the Russian Defense Ministry told Interfax-AVN on Friday.

"[The object approaching Earth] was identified as a natural object. We have no information that it was a man-made object or some aerospace attack device of a foreign state," the source said.

A laboratory has been deployed in the emergency area, he said. The radiation levels are normal and no chemically dangerous emissions have been registered.

"There is no threat to people's lives or health from other factors either," Puchkov said. Yet he warned about the dangers of coming near meteorite debris, which can be found in the Urals.

The chemical composition of the pieces will be determined after a comprehensive analysis.