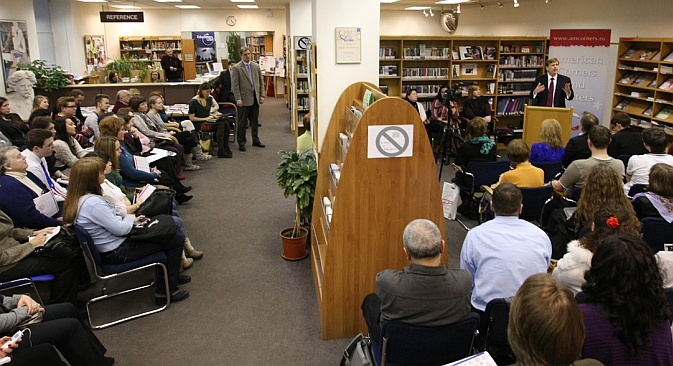 Despite growing difficulties in Russian-U.S. relations, interest in American culture remains strong – as evidenced by a growth in attendance at Moscow’s American Center.

A bust of American writer Mark Twain and a cardboard cutout of U.S. President Barack Obama greet Russians who enter the American Center, located in the Library of Foreign Literature in central Moscow. The American Center in Moscow is one of more 25 American Corners scattered throughout Russia.

“Russia is celebrating the 20th anniversary of having the American Corners program,” said Sarah Ziebell, Information Resource Officer at the U.S. Embassy in Moscow. “Russia is the first country where the U.S. established an American corner.”

The Bureau of International Information Programs, a part of U.S. State Department, determines the amount of funding the American Centers and Corners receive, although the budget comes entirely as an appropriation from the U.S. Congress.

Today, in most countries where there is an American Embassy, there is at least one American Center or Corner.

Artem Avtandilov, an alumnus of Global UGRAD, a U.S. government-sponsored academic exchange program, said that the American Corner in Kazan exceeded his expectations in terms of the amount and quality of opportunities available.

“Visiting the American Corner is a chance to get to know not only American culture and improve language for me, but also a great chance to meet other people with similar interests and discuss important issues,” said Avtandilov.

“The American Center in Kazan organized a speaking club where everyone had a chance to talk to native English speakers. Topics of the discussions usually cover U.S.-Russia relations, cultural features of both countries and allow you to know more about Americans,” he added.

Russian-US reload beyond the politics

According to Ziebell, Avtandilov’s experience is exactly what the American Corner program aims to provide.

“It’s a long-standing idea to achieve mutual understanding between Russia and the U.S. It isn’t just government-to-government dialogue, but also it’s the dialogue and individual relations between ordinary people," she said. "It helps us understand each other better and find ways to work together.”

“I have been keenly feeling that I need to understands and communicate in English,” she. “Since I don’t have now an opportunity to hire an English teacher, I jump at the opportunity to find other ways to study English and practice it.”

But more important to her is the opportunity for her son to learn the languge.

“As far as possible I try to involve my son in studying English,” Nik said. “My friend told me several days ago that the American Center offers free English classes for children [through the AMC Children’s Club].”

Nik hopes to get acquainted with native English-speakers and those who are interested in English and American culture.

“Here I’m looking for interested, cultural and well-educated people who can share their experience and encourage me and my son to study English more.”

Both in Russia and worldwide, American Centers and Corners offer programs that fall within five main categories – providing information about the U.S., offering cultural programs in English, English language learning, and advising people who wish to pursue their higher education in the U.S.

Usually, information about the U.S. is provided through a library that incorporates books, magazines and DVDs.  The library at the American Center in Moscow includes books on topics ranging from the natural sciences to economics to history and journalism.

The American Center in Moscow doubled its attendance between 2010 and 2012 from 4,000 visitors per month to 8,000 visitors per month. Said American Center in Moscow coordinator Kore Gleason: “We can relate this increase to growing curiosity to the American culture on the one hand, on the other hand we have been diversifying our programs to make them more interesting and interactive for children and teenagers,” she explains.

The cultural programs provided by American Centers also touch on a wide variety of topics.

“We have been increasingly inviting prominent American speakers, famous writers [like Michael Cunningham], journalists [like John Alpert], academics, visiting scholars,” said Kore Gleason, the coordinator of the American Center in Moscow. “We have a lot of speakers – representative of U.S. universities who speak about their programs or give workshops how to write better application packages to study in the U.S.”

Gleason added that the Center is trying to encourage Russian experts who speak English to give presentations. In February, for example, the American Center invited leading Russian biologists to discuss wetlands in Russia for World Wetlands Day.

Sometimes the cultural programs also incorporate creative uses of technology. In December the American Embassy in Moscow organized a Wildlife Conservation Day program and invited Russian specialists in this area to answer questions from Russians across the country.

“We did a live video conference to bring together people from different American Corners through Russia,” said Ziebell. “We had people in the live audiences asking questions, we had speakers responding questions and we had Russian chat moderators bringing questions forward forward from the online audience.”

In many countries, including Russia, the American Centers and Corners are on the frontlines of the information war, providing information about the United States that may contradict what is reported in the local press.

A year ago, 44 percent of Russians had a favorable attitude to the U.S. Today this figure has increased up to 56 percent, according to a poll conducted by the Levada Center.

When asked whether the coverage on the U.S. in media influence her opinion about the U.S., Nik said she didn’t feel that her Russian TV changed her mind about the U.S.

“What I see in mass media about the U.S. is far from the truth, as I understand,” she said. “I am more inclined to believe [my personal experience] and friends rather than newspapers and magazines.”

Avtandilov also said he was not very influenced by the Russian press and TV.

“When I watch so-called ‘talking heads’ on Russian TV, I expect reckless criticism of whatever is going in the world involving the United States,” he said. “That is the way all major TV channels work in Russia and I can't see the way they will be able to influence my opinion about the United States. I had the chance of a lifetime to get to know American people personally and meet many friends in the U.S. I know and understand their differences and values and can't see them as anti-Russian at all.”

The American Center in Moscow is located at the State Library of Foreign Literature, 1 Nikoloyamskaya Ulitsa (Metro: Taganskaya). For more information about American Centers and Corners in other parts of Russia, visit its website.